To all intents and purposes, Dice Brawl is a retooling of the Jumanji board game that came out a couple of months ago. It's from the same developer, and uses the same basic mechanics.

But there are a good few twists here that make the game worth checking out, especially if you were a fan of the first iteration.

Basically this is a well put together casual board game with a lot to discover. It's not super deep, but if you're after a distraction it serves that purpose pretty damn well.

This time around the theme is pirates. You're rolling dice to move around a circular board. There are 8 rounds, and to win you either need to kill your opponent, or have the most fortresses on the board at the end of the last round.

Every turn you roll a couple of dice, and move the number of spaces indicated. Land on an empty space and you can choose to spend some of your gold to build a fortress there.

Land on a space your opponent has built on and you'll take a blast from their cannon. Then you can choose whether to try and occupy the fortress or let it remain in their hands. 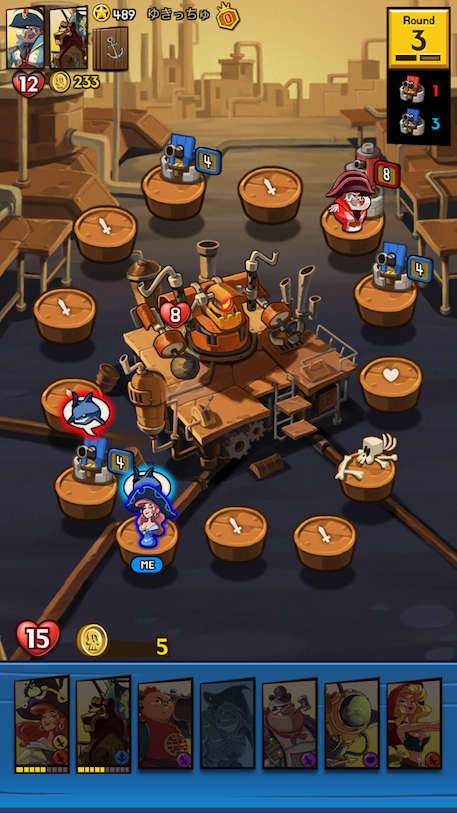 Fight and you'll roll some dice. Whoever gets the highest score wins and inflicts that amount of damage on their foe. It's the same when you land on a space that's occupied by the other player, although then you have to fight.

There's a boss sat in the middle of the level too, and if you land on the correct square you need to fight him. Kill him and you'll get a hefty chunk of rewards.

You've also got a deck of cards that can change your chances. Some give you more dice to roll in fights, some up the offensive power of your fortresses. There's a good deal to figure out, and finding a deck that works for you is key.

No, Dice Brawl doesn't have the strategy or nous of a larger scale board game. It's sort of like the Clash Royale of dice-rolling, and if that's not going to appeal to you then you should steer clear.

But if you want something to while away a few minutes a day with, then Dice Brawl is well worth checking out.

It's not super deep, but there's still plenty to enjoy in Dice Brawl
Next Up :
Sumire review - "Why do some days stay in our thoughts forever?"