We ask Mark Ollila if he'd care to dance

Dance Fabulous has been on the market for a few weeks now, and has attracted some very positive press – not least our own 8 out of 10.

The game's uniquely customisable approach to the rhythm-action genre stands as an indicator of where the N-Gage platform should be heading – not towards a bunch of me-too dance-related copies, but towards innovative and bespoke titles that make full use of the host platform’s strengths.

We thought it would a be a good time to speak to Nokia’s Mark Ollila, who oversaw the development of Dance Fabulous from pre-production onwards, to gauge his thoughts on the game, the response it has gained and the company’s plans for the future of the franchise.

Pocket Gamer: Dance Fabulous has been out for a good few weeks now – are you happy with the response to it (both commercial and critical)? 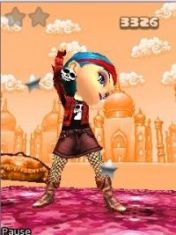 Mark Ollila: The reviews have been very positive, particularly with old male reviewers who are confused about what Dance Fabulous is about, give it to their children who are playing it continuously and end up giving it 4 or 5 stars. The game is about customisation, about sharing your moves, about dancing to your own music. Simple. Unique. But compelling.

The game has been in the top five for N-Gage since launch and we have the 30-day free pass available for people to experience it fully. Close to half of the activity is coming from China (our consumer studies expected that to be a great market). We are in the middle of various marketing activities around the game (such as the Dance Fabulous Challenge) and having it embedded on more devices.

What was the initial thinking behind the Dance Fabulous concept? Nokia has really pushed the music angle with its handsets in recent years – was it related to that at all?

We have always been very interested in the question of concepts that are attractive to females and have been putting together tens of game concepts around elements that we thought would appeal more to the female audience. These elements include that the game should not be about winning, but more customisation and sharing of experiences.

We actually had the first proposals for the seeds of Dance Fabulous in 2005, but it was only in 2007 that we greenlit the preproduction. The timing of this to our push in handsets is coincidental, but expected, as we provide services such as Nokia Music Store. We constantly adjusted the concept, modified gameplay elements, examined how to tie it to our music offering, but also to expand the reach of the game.

By having the avatar customisation, and the different dance styles (hip-hop for example) allowed us to ensure that it would appeal to both sexes. I know myself, as with most guys, often dance on the inside, but at least with Dance Fabulous, I can show off my great moves.

So what inspired the dance angle in the first place?

Some of the inspiration for the game came from our own search, looking at internal activity, looking at gaps in the market, as well as just looking at what we see on dance that other people have brought up. One thing I enjoyed was reminiscing on my own dance evolution from trying to be a break dancer to a disco king. I remember winning a dance competition when I was 12 or 13. Things have gone downhill from there. 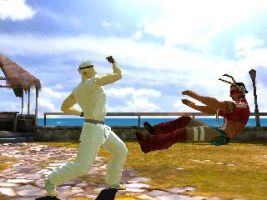 But seriously, whilst we were working on ONE, our fighting 3D extravaganza, we were thinking of what could be done next. We continually concepted, and one thing we kept referring to as a reference was Judson Laipply’s sketch on The Evolution of Dance. It brought back memories, and just indicated that a dance game, where you dance, and not just pattern matching would be unique and new, particularly if it was to your own music.

I particularly loved the kung fu fighting dancemoves, which link our game ONE to the idea of Dance as well. Another contemporay video I enjoyed also was the dance duel in Starsky and Hutch.

Through some of our consumer studies (UK, China and India), we found that customisation and your own music was the biggest sources of appeal and the secondary sets of appeal was the dance on your phone and competition aspects.

One of the most impressive features is the way the game accepts and adapts to your own music. Was that always part of the plan for the game, and how hard was it to achieve?

We spent a lot of time and effort in this area. Nokia is fortunate to have Nokia Research Center where there was some research in music analysis performed and we looked at how this could be used in the game. We examined various algorithms, what could be done through the various APIs that are available to provide music information, and then implemented gameplay elements that worked in with the various music and styles we wanted in the game.

In the end, it is much more simplistic than we originally planned, but something that we are looking to continue to improve on.

Will there be continued support for the game in terms of additional song packs, extra dancers or accessories?

How valuable was Dave Stewart’s input? What exactly did he bring to the game? 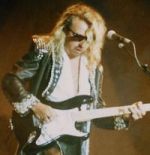 Dave Stewart was great. When you have a music legend providing his ideas into the production as we are going along it adds great value. We are the experts in making game content, but he is the expert in music and what music artists want to achieve with their fans.

Our interaction lead to us having songs written for Dance Fabulous by Dave and Cindy for instance and bring in a new talent like Cindy Gomez (unsigned at the time we made the decision!) showed a lot of good faith and judgement on our side as well as trust in Dave’s ability to spot talent.

Are there any plans for a sequel?

I guess this is one of the big questions we are asked all the time. One thing that I particularly like to think is the idea of a 'Game as a Service'. Dance Fabulous should not be looked at as a one-off, but as something that can evolve and even become a service that is available across our devices. We are definitely looking at the various ways we can do this.

In the meantime, the next update we will do will be making a touch version available in second half this year. From there, how it evolves will depend on the reactions we see from the community and how we align it with our cross service strategy.

You seem to have good relations with developer Digital Legends – can we expect more N-Gage support from them in the future?

Digital Legends is the best mobile games developer out there with respect to character animation. Games such as ONE and Dance Fabulous prove that. We obviously want to work with the best game developers out there, and are open to new developers, but at the same time, value the relationship and partnership we have formed with companies like Digital Legends.

Where next for N-Gage? You've spoken in the past about location-based gaming – are you any nearer to finding a workable way (or ways) to implement such features?

We have several games coming out during 2nd half which are quite exciting, some of them unannounced which will add to the tension!

I think on the topic of location-based gaming, I like to use the term of 'casual location' which we have been exploring quite a bit, where you play with maps and do not need to be physically involved, but get a true game experience using your location. We have the technology in place pretty much through some preproductions we have been doing. Now we just need to focus on what game concept we bring into production and the schedule of that.

Our thanks to Mark Ollila for his time.
Next Up :
Noah's Heart first impressions preview - "Puts the 'massive' in 'MMORPG'"