And we got hands on (with the game, not with Cindy)

You probably haven't heard of Cindy Gomez. We certainly hadn't, before we met her yesterday at the Nokia Games Summit.

She's an up-and-coming singer-songwriter who's the star of Nokia's newly-announced Dance Fabulous game for N-Gage, and is lucky enough to have ex-Eurythmics man Dave Stewart for a svengali / co-writer.

Anyway, you can MySpace her to hear some of her tunes - she's been talked up as the next Beyonce - but we're more interested in her views on the game. So we asked her.

"Right now, the world doesn't really know who I am, so it's a great way to introduce myself," she says.

"You can reach millions and millions of people not just through radio and television, but now through this new technology where everyone has one of these things in their pockets. It's extremely exciting for me to be involved with Nokia in this new venture." 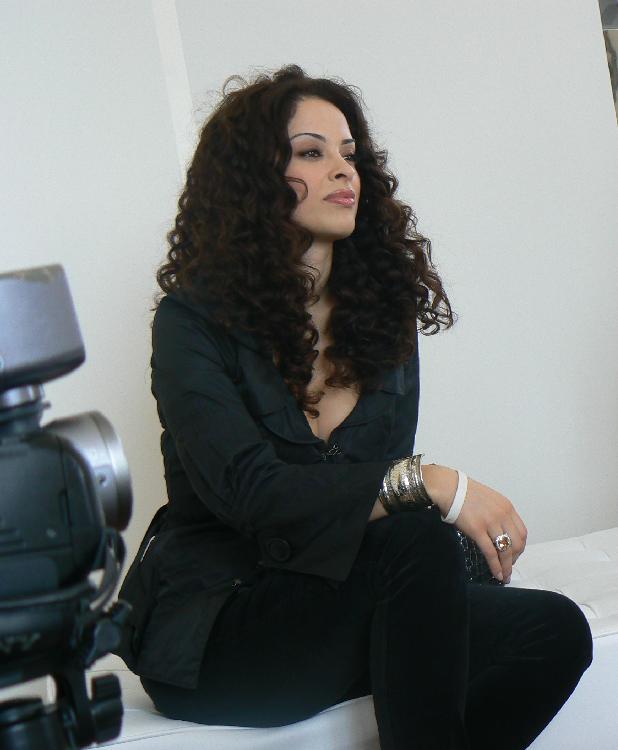 That last part sounds like a made-up press release quote, but we promise she did say it - we winced accordingly at the time.

But beyond the corporatespeak, the way Nokia is trying to effectively break a brand new artist using Dance Fabulous is genuinely innovative, especially if they can achieve their aim of tying the game in with the Nokia Music Store.

Anyway, it can't be bad for a new singer to have someone like Nokia throwing their weight behind you. It seems Cindy has had some creative impact on the game itself, too, which is being made by Spanish developer Digital Legends (of Kroll and ONE fame).

"I was in Barcelona a couple of days ago, working with a choreographer on the dance moves," says Cindy.

"The moves we came up with will be put into the game. It's very exciting. When you're at an early age and watch Michael or Janet Jackson do something, you think wow, and everyone starts to imitate that move. We can only hope that something like that starts to happen with this."

We had a chance to test out those dance moves (in the game, not in real life, mercifully) when Nokia producer Lammche lent us his phone for a go.

The first thing to say is that the game is shaping up as really fun. The core gameplay doesn't involve matching key-presses to arrows or notes on-screen, as with most music games.

Instead, tap right, and your 3D avatar dancer does a move to the right. Tap left, and vice versa. Tap left then right, and she does a spin, and so on. To do well, you have to bust moves in time to the music.

There's even one move - performed by holding the down button - which we can only describe as the 'kneel on the floor while pretending to hump it' move. There's probably a more technical term.

Anyway, Nokia has half talked up Dance Fabulous as a game aimed at girls, but we think it could have wider appeal than that (translation: we loved it, and now need to justify that fact).

You'll be able to customise your avatar in all manner of ways, and will be able to dance to your own music stored on the handset, via a nifty algorithm that analyses the song to check you're dancing in time.

There'll be sharing options too, of some kind - possibly involving sending your best dancing performances to friends as a ghost. Lammche also says there's a possibility of themed dance moves around different genres - metal for example.

Dance Fabulous isn't out anytime soon - "later in 2009" is all Nokia has said for now. It's definitely one to watch though. If Digital Legends and Nokia can leap the various technical hurdles to making the music features work.

And, of course, it could make Cindy a star.