Damned if you don't 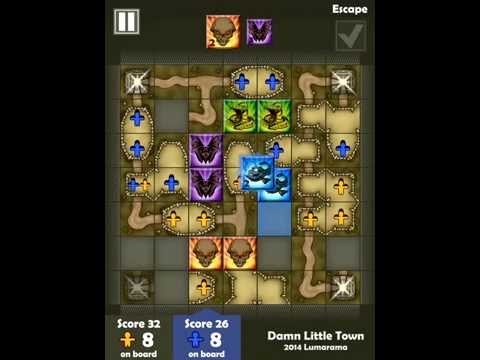 Damn Little Town is a game of two halves. First you need to build a series of paths on a grid, dropping little Carcassonne-style men onto the newly-created map as you do.

Then some terrifying monsters appear and you need to use the walkways you've created to get your followers to the safety of the four temples at the corners of the screen.

That's easier said than done when you've got up to three other opponents trying to block your escape with slavering beasts and servants of the Old Ones.

It's a tightly paced boardgame that's over in a few mintues, but packs enough strategy into its run time that there's rarely a dull moment.

You can grab the game right now for nothing from the App Store. If you like what you see a £1.49 / $1.99 IAP will let you unlock some extra content and get rid of the ads.

If you're fan of quick-thinking multiplayer games, we reckon it's worth a pop.