The adventures of the super funny radish dad have returned in Dadish 2, a challenging platformer that you can play from your mobile device. Much like the previous game, this radish is looking to reunite with his 40 or so children, who are visiting the office today! Apparently, every day is bring your child (or radish) to work day if you have that many of them, and they keep turning up on their own anyway.

As it turns out, you actually have no idea what you do for work anyway, and are just spending the day jumping, avoiding spikes, using platforms, and moving boxes in order to find your way to one of your kids! With one in each stage, they act as the endpoint of the level, providing some quirky dialogue before whisking you off to the next level. The controls are simple - one side of the screen allows you to move left or right while the other is used as a giant jump button. 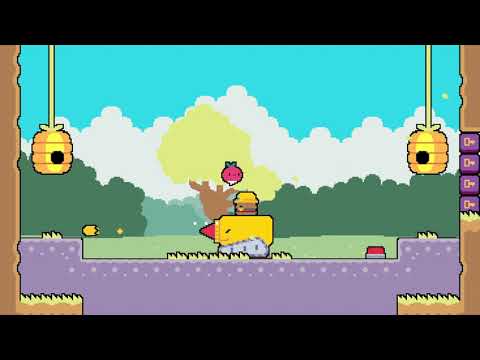 Moving around each of the levels, you will need to solve little puzzles to make it to the end, grabbing keys to open new areas, pushing blocks to avoid cannons, questioning why there are giant saws and spikes in your office. Enemies roam, in the form of other food, that will destroy you if you crash into them. Actually, hitting any dangerous objects or enemies will result in you being sent back to the beginning of the level or the previous checkpoint.

What kind of game is Dadish 2?

Don’t worry though, your kids will still wait for you, just out of harm's way. Dadish 2 is a really well-made platformer, but it is just that - a platformer with great graphics and good controls. There isn’t anything new in the gameplay itself - you will likely have seen most of the level mechanics within other platformers themselves, however, the characters in the game make the game shine.

At the end of each level, when you talk to your child, you will get to read funny conversations about your kids running in traffic, you not really knowing why there are donuts in the office, and some notes about capitalism. It’s a great end to a challenging level, giving you something more to enjoy as you get to know the various children that you do have.

Despite the game not having any new mechanics, the levels are polished, there is a good amount of challenge in each level, and the characters are just really fun to interact with. It’s a well-made platformer with some new characters that I just can’t get enough of.
Next Up :
Evony: The King's Return review

Dadish 2: Tips to get you going in veggie adventure sequal