M2H has released Crash Drive 3, a new entry in the popular stunt racing series for mobile devices. It is available now on iOS and Android.

Crash Drive 3 is a multiplayer game where you can explore a colourful open world, perform impressive stunts and compete in a variety of different games and races. You can completely customise your car and drive around finding hidden secrets and new discoveries.

It’s also not a very serious game though, emphasising its silly premise by including vehicles like monster trucks and tanks as part of its structure. These can be used in both singleplayer and online modes, where you level up as you participate in these events to unlock new cars.

If you want to see more of that chaos for yourself, check out the linked trailer below. 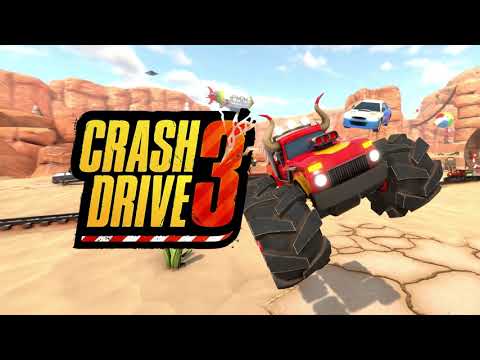 As an open world game, Crash Drive 3 also has a few features that best fit this format, such as five different areas with a variety of events to participate in across both co-operative and competitive multiplayer modes. These include silly minigames such as cops and robbers, stunt tagging, or a game of volleyball that involves a giant beach ball.

There’s also cross-platform play if you have friends playing on different devices such as PC or console. This ensures that everyone will be able to play with each other no matter how to decide to play the game.

Crash Drive 3 is out now on the iOS App Store and the Google Play for Android store, where it is a free to play game with in-app purchases. It will also be launching later today on Steam, Nintendo Switch eShop, Xbox, Epic Games Store and the PlayStation Store.

If you are a fan of racing games on mobile, check out our list that names some of our favourites on iOS.
Next Up :
Arknights adds 3 Operators and new storyline in limited Beyond Here event