On the EU PlayStation Blog, California-based indie developer Dynamighty has 'leaked' some more details about, and posted a trailer for, its upcoming Vita stealth action game CounterSpy.

First, though, let's take you back in time...

Last month, Sony invited co-founder of Dynamighty David Nottingham to pen a blog post about its in-development CounterSpy game for Vita and PS3.

Rather casually, though, Nottingham slipped in a reference to its "action side-scrolling game being developed for PlayStation 3, PS Vita, and mobile platforms" in the second paragraph. (Emboldened by PG for greater effect.)

Well, in Dynamighty's newly released trailer for CounterSpy, the developer invites players / viewers to "try the thrill on mobile". Scrub along to 1:15 if you don't believe me. 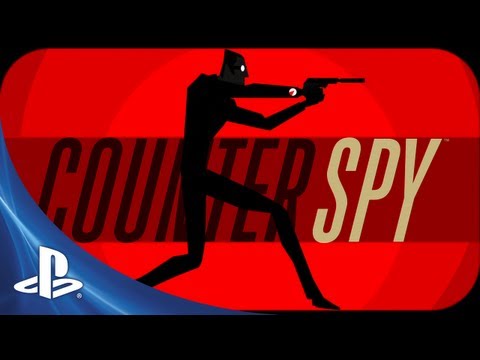 So, looks like tablet- and smartphone-toting fans of espionage thrillers should definitely keep an eye on this one.

Anyway, the game itself is set during an alternative Cold War. You are cast as a long-limbed spy who's the only hope the world has of avoiding nuclear destruction.

You'll need to sneak through bases, hack computer terminals, and engage in action-packed shootouts with enemy agents if you want to pull the planet back from the brink of annihilation.

The game has a gorgeous style all of its own: chunky graphics are mixed with '60s-style bands of colour and a shiny secret base aesthetic ripped straight from one of James Bond's movie adventures.

There's still no word on when CounterSpy will be sneaking onto Vita and mobile, but we're super-excited to see how it turns out. We'll let you know as soon as we've got any more information on the game's release date.