[Update] The leaks were right: the remastered version of Corpse Party is coming to your 3DS this summer

3DS
| Corpse Party
Update on April 15 at 09:41: Just as we expected, XSEED as now confirmed that the game is indeed coming to our shores on 3DS. The game will have a physical release with miniature figurines in a "Back to School" edition.

This remastered version includes four new chapters and will be out this summer.

Corpse Party is extending the fun to yet another platform. Released in Japan on July 30, the 3DS adaptation of the cult classic horror title seems to be getting a western localization courtesy of XSEED as proven by this ERSB certificate.

This is not the first time a localized version of Corpse Party came to our shores, even the mobile version got here, but it's the first for a Nintendo platform. 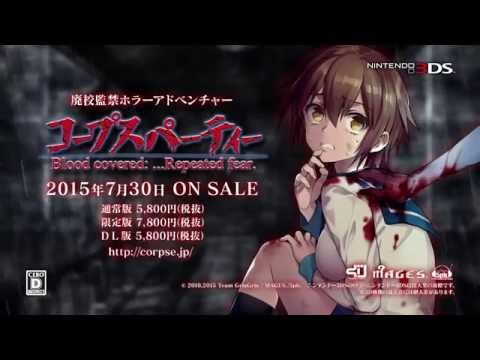 Don't be fooled by the game's simple graphics, it's quite an experience that relies on more than just jump scares and pushes psychological horror to a whole new level even if it's too punishing.

We'll let you know when we have a solid release date.

Better wear your brown pants as the horror RPG Corpse Party drops to £3.99 on iOS

Corpse Party is everything a great horror should be, and it's out now on 3DS

Out at midnight: Corpse Party drips its bloody murder over from PSP to iOS