Cute Sonic-style platformer Cordy gets a surprise sequel on iOS

SilverTree Media has launched a surprise sequel to whimsical robo-platformer Cordy. You can grab Cordy 2 on iOS right now, and you won't need to pay a penny.

The story once again follows the exploits of bobble-head bot Cordy. This time, he's on the appropriately named World 2, which has been besieged by the evil Boogaloo.

Cordy (and his pal Volt) will zip and bounce across three worlds - Carnival City, Harmony Harbor, and Sky Factory - in a quest to save the planet's automated inhabitants from evil.

We loved the first game. In our Silver Award review of Cordy, we said, "nearly every aspect of the game is so polished, not to mention downright charming, it's hard to resist taking it for a spin". 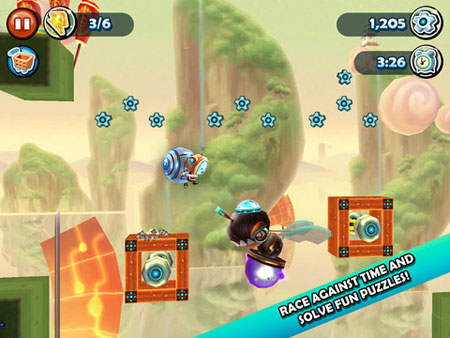 This follow-up is just as bouncy, fast paced, and joyful as its predecessor. Plus, you'll find loads of new toys and tools with which to fiddle. Those include jetpacks, magnets, helicopter helpers, and giant wall-smashing weapons.

It's iOS only right now, but it should wind up on Google Play soon.