Carcassonne is sort-of a household name as digital board games go, and for good reason too.

Though its original adaptation by Exozet Games arrived on the mobile market back in 2011, Asmodee Digital's taken another, more up-to-date whack at it for their roster, and it's just as fun as ever.

Build me a city

In Carcassonne you're pitted against up to four AI or real-life opponents in a strategic battle of city-building and territory claiming. The winner is whoever's got the most points at the end of the round.

By laying tiles, you build up towns, carve out roads, and try to outsmart your foes until you've got no tiles left to play. 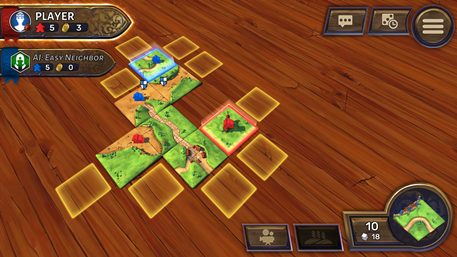 Sounds easy, right? It's really not. The tiles are offered up at random and placing them in the optimum position isn't always as straight forward as it seems.

Don't be surprised if you face a handful of punishing defeats before you start fully understanding the rules.

You're given a small number of stick figure-like meeples that you use to claim different features. These aren't limitless, so again you have to be clever about where you're putting them.

Each time you complete a road, monastery, or town you'll get your meeple back if you've placed it in the right place and earn a few points as well.

The bigger, bolder moves, like carving out a huge town, are guaranteed to wrack up a decent number of points if you remember to claim the territory. Though, you can also end up giving a huge number of points away if you forget about your meeples.

Once a feature is completed, the person with the most meeples in the area gets the points. Aside from monasteries, roads, and towns, points can also be gathered by using farmers to claim fields.

Once the game's over you'll get a higher score depending on how many complete cities your farmland touches.

Finally, incomplete cities, roads, and monasteries are worth one point per tile, so if you've got a big, fat 'X' over a tile that can't be laid upon it's no big deal.

It's not just the visuals that've gotten a refresh. No, on Android you've also got pass-and-play local multiplayer, updated AI with three difficulties, and the ability to switch between a 2D and 3D perspective. 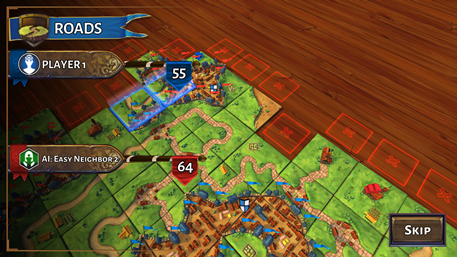 If you're more of a social person you've also got online multiplayer for up to six people. You'll need an account for it, but its asynchronous play means you'll not have to wait in real time for people to make their move, and you can play multiple games at once.

Once you've registered an account, you'll automatically unlock The Abbot expansion, giving you more to play with. The River expansion is also available, but won't come free.

Its online matches still suffer some, making you wait for a full lobby before sending you off to your match, but it's not a deal-breaker in the least.

Carcassonne's recent Android re-release and its fresh, new features are a joy to experience, whether you're playing against strangers online or testing friendships with existing pals.

A polished and feature-packed version of one of the best digital board games out there
Next Up :
Otaku's Adventure mobile review - "A truly bizarre love triangle"