As for one of the most talked about and disliked game trailer of the past two weeks, the popular titles mashup Bridge Constructor Portal is now out on iOS and Android. 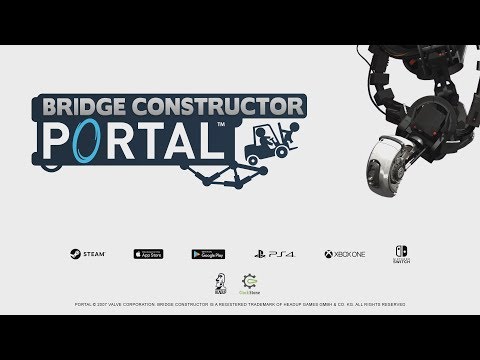 Subscribe to Pocket Gamer on
Bridge Constructor Portal, in case you can't guess from the name, joins BC and Portal together in a new puzzler featuring mechanics from both games. You've got the physics-based familiarity of one and the intuitive puzzle solving methods of another - plus GLaDOS.

Posing as a new employee in the Aperture Science test lab it's your job to work through 60 difference chambers, building bridges, ramps, slides, and more to get the Bendies across the lines. Make use of familiar Portal features, like the propulsion and repulsion gel, cubes, portals, and more to solve the tricky challenges.

Though it sounds like a rather fun puzzler, at first announcement the response was - erm - negative enough to removed the likes/dislikes bar from its trailer. Given that a lot of gamers thought Valve's big announcement was going to be Portal 3, it's kind-of understandable.

Either way, Bridge Constructor Portal is available right now for £4.99/$4.99 on the App Store and Google Play.