With PG First Play video (Updated: Out now on iOS and Android) 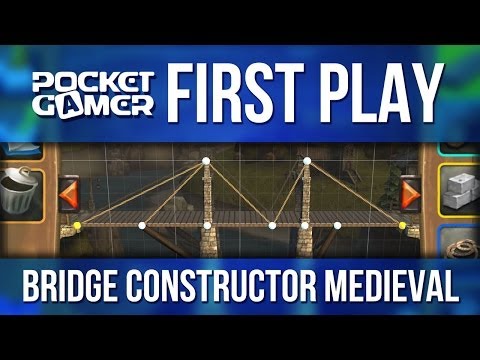 Like before, you're tasked here with building a strong and stable structure to get units over a big chasm. This time, however, you're dealing with horses and soldiers (instead of cars and trucks).

You will also need to look out for incoming cannonballs and build defences to protect your bridge. In some levels, mind, you'll need to intentionally build bad bridges to make enemies fall to their death.

Bridge Constructor Medieval boasts loads of content and a fun storyline to tie it all together. There are also a few in-app purchases for hints and the like, but you shouldn't need any of them to enjoy this game.

Bridge Constructor Medieval will surface on the UK and US App Stores tonight as a Universal iPhone and iPad app for £1.49 / $1.99 (a 33 percent discount for launch). An Android version should be along very shortly - we'll let you know when it goes live.