Despite how massive iOS gaming has become, we in the mobile gaming industry still act like infatuated teenagers when a big console game deems us worthy of its presence.

It's like when a rock icon comes to play your home town - like him or not, you can't help but be swept up in the excitement and sheer local pride of it all.

Imagine if said rock god strolled in, gave a truncated and half-arsed performance, insulted your town, and made it clear that he was only there to promote his new record.

That's a bit like how it feels to play Borderlands Legends on iOS.

Borderlands, for those of you who aren't hardcore console gamers, has been one of the most successful new IPs of recent years.

It's a first-person shooter set in a sprawling post-apocalyptic world with a bold comic book style and a ridiculous amount of loot to horde.

The home console sequel was released fairly recently to rave reviews and strong sales. Its developer, Gearbox, has been praised for 'taking care' of its fans, producing additional downloadable content that's not just there to make money off the name.

Hopes were high, then, that Borderlands Legends on Apple's mobile platform would be more than just a cynical cash-in. Those hopes were too high, I'm afraid.

The concept of Borderlands Legends is a sound one. Rather than attempt to replicate Borderlands's frenetic up-close action on iOS - an approach surely doomed to failure - Gearbox has produced a zoomed-out squad-based action-strategy game.

Each mission is broken down into a number of disappointingly static, unimaginatively staged screens.

Waves of enemies taken from the Borderlands universe spawn at various points, leaving you to issue commands to your four heroes (who happen to be the four heroes of the first Borderlands).

Problems arise at this stage because telling your crew of four to do anything is a total pain in the heat of battle. The trouble is that moving, attacking enemies, and using each character's stat-buff ability are all activated using the same touch-and-swipe system.

Couple that with some imprecise contact points and you'll end up firing on an enemy from afar rather than walking up to it and unleashing Brick's melee special, or you'll end up healing a fully healthy team mate rather than moving next to him to assist in a firefight.

The developer attempts to take some of the load off this strained system by allowing you to use the character portraits at the top of the screen as a shortcut for selecting characters and activating their buff skills. But, even this system seems frustratingly unresponsive when things get hectic.

Not being able to move around freely is a major flaw, as it's the key to an efficient round. You need to be able to step around cover and flank opponents in attack, and to run back quickly in order to resuscitate a downed team mate when acting in a defensive capacity.

With all of the fiddly control elements in such close proximity (as well as some horrendous pathfinding), this can prove impossible at moments of high intensity.

Borderlands's bold comic book style doesn't really translate well to this kind of game, either - at least not on this evidence. The menus are nice to look at and faithful to the series, but in action everything gets rather cluttered and confusing.

One early arena boss fight proved particularly hilarious, as all the combatants converged on a single point amid a jumble of clashing colours and random effects. It was like those classic cartoons where two cats get into a fight, forming a single mass of dust and limbs.

Elsewhere, Gearbox has paid mere lip service to Borderlands's labyrinthine upgrade systems. They look the part, but the weapons come too thick and fast, to the point where they're often in use for only half a mission.

Not that there's any great differentiation in use. The whole hands-off, zoomed-out approach means that the joy of wielding an explosive shotgun or an acid-spewing sniper rifle - so key to the console series's appeal - is almost completely lost here.

In fact, there's barely any sense of discovery in Borderlands Legends at all. You're awarded the odd rare weapon at the end of a level, while the rest can be bought from the mid-level or end-of-level vending machine.

To be fair, Borderlands Legends isn't an atrocious game. There is fun to be had levelling-up your characters and developing a strategy that best utilises their strengths. It's comfortably average in its own way.

But, 'comfortably average' simply isn't enough. Not for this property. Not in this phenomenal video game universe so ripe for looting, exploring, and strategising.

Borderlands Legends comes across as a half-hearted promotional tool for the main Borderlands franchise. And if this is your first experience of the series, you're unlikely to want to explore its primary-coloured wastelands any further. And that's a real shame. 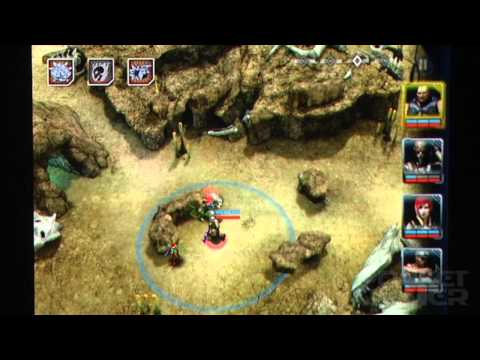 The worst console spin-offs on iPhone and iPad

Everything we know about Borderlands Legends for iPhone and iPad