I've been playing Boom Beach for a couple of weeks now, and I can confidently say the following...

Yes, it is quite similar to Supercell's previous title Clash of Clans. Yes, you do build defences to protect your resources. Yes, you do train troops to send them to war.

However, spend a little more time with Boom Beach and you realise that while the fundamentals are similar to Clash of Clan's, there's more depth here than in its older brother.

Thus, Boom Beach is a richer and more satisfying experience than Clash of Clans. 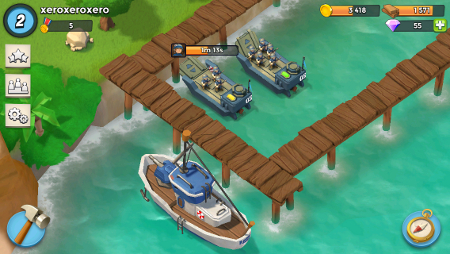 You'll need to upgrade your Gunboats and landing craft

Boom Beach starts out like any Clash of Clans-style game. You're given a home base and have to defend its HQ at any cost. So, you begin to build sniper towers, machine guns, mortars, and cannons, all in the hope of stopping the dastardly Blackguard forces.

Unlike in Clash of Clans, you can't purchase units here to enable you to build or upgrade multiple structures at once - you can only issue one construction command at a time.

This slows the pace of Boom Beach down. And when you first begin playing, it's very tempting to spend the premium currency (of diamonds) to speed things up.

Yet you shouldn't, because the game is actually trying to funnel you towards entering combat, and the increased time you'll spend in this mode of the game more than makes up for the sedentary building element.

Since there are baddies to be beaten, you can't just sit back and soak up the rays on your tropical island paradise. You have to take the fight to them, liberating the native people from their captives and thus gaining access to more resources.

I found the battling in Clash of Clans to be an acquired taste. It was like herding cats: you had to make predictions on your troops' movements through the battlefield, and try your best to plan for the defences your enemy would throw at you. 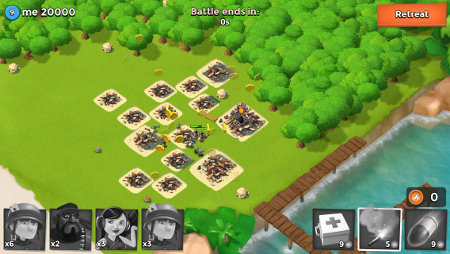 The sweet taste of victory (and hard coin)

Boom Beach gives you more control, more ways to scupper your opponent's plans, and more opportunity to think tactically about how you approach a situation than Clash of Clans.

Whether it's shelling a particularly troublesome flamethrower or healing your forces with an area-of-effect medikit, these direct actions make you feel in control, and not completely at the mercy of the game's AI.

The best improvement over the standard Clash of Clans formula, though, has got to be the flare. Fire one of these at a spot on the map, and your troops will head towards it until it fizzles out. This enables you to guide your soldiers around a patch of mines or focus all their fire upon a specific target.

When you won in Clash of Clans, you sometimes had the suspicion it was simply because you had a stronger army. In Boom Beach, each victory feels like it was earned, not bought.

There are visual improvements, too. Trees bend in the wake of explosions; the sea flows beautifully; and there's generally more detail on each unit and building. It's a high-class production throughout, as you might expect.

Boom Beach reveals more of its depths the longer you play, but you'll want to discover them for yourself. Needless to say, this is essential fare for anyone interested in tactical games on mobile, and represents the next step forward for Supercell's take on strategy management.

Boom Beach isn't a gigantic leap forward for the genre, but it's enough of an improvement over the competition to warrant further investigation
Next Up :
Otaku's Adventure mobile review - "A truly bizarre love triangle"