Infinity Blade is arguably the most iconic app on iTunes. Apple repeatedly uses iterations of Chair's sword-slashing series on stage to showcase the power of new generations of Apple hardware.

So, naturally, Tim Cook and co. have kept it exclusive to iOS, leaving Android users little choice but to seethe impotently in the direction of their iPhone-owning buddies.

Equally naturally, hordes of eager 'droid developers have smelled an opportunity. And blood.

Unfortunately, most don't have Chair's resources or the same keen eye for what makes a slash-based combat game challenging and addictive, resulting in a slew of dreadful quality copycat apps with none of the flair or fun of the original.

Fear not, though! Pocker Gamer is here to help by wading through this morass of rubbish in search of the hidden gems. So, I've endured the tedium in order to highlight these, the best Infinity Blade-esque games available on Android.

The weakest thing about Infinity Blade is its bizarre and somewhat cynically contrived (spin-off merch, anyone?) plot. So, Glu jettisons the fantasy faff and gets straight down to the melee action in the gladiatorial arena.

Thankfully, there is still a plot to keep you digging down deeper into the game, even if Glu does riff on Ridley Scott's Gladiator here in a very noticeable way.

But it's a solid homage to its source material, with chunky combat moves that represent an enormous improvement over the repetitive and easily mastered techniques in Blood & Glory. 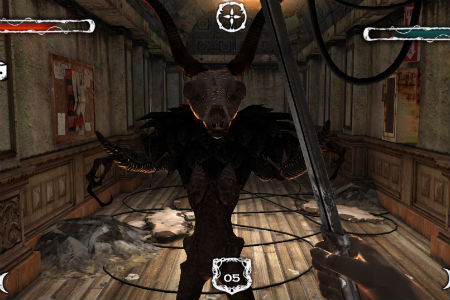 While this sequel to The Dark Meadow is built on a lightweight replication of Infinity Blade's brawling, there's enough additional material here to make it well worth your time.

For starters, it's got a big exploration element where you are duly rewarded for hunting in dusty corners for forgotten cash or extra weapons.

And then there's the horror theme. This might not seem an obvious choice for a combat-action game, but there is an intriguing plot and a fantastic bestiary of grim foes rendered in ghoulishly delightful detail in Dark Meadow: The Pact.

Best of all, though, is probably the in-game narration, which is peppered with weird jokes and clunky dialogue. It feels out of place at first, sure, but it becomes increasingly 'unhinged', lending the experience an extra layer of menace. 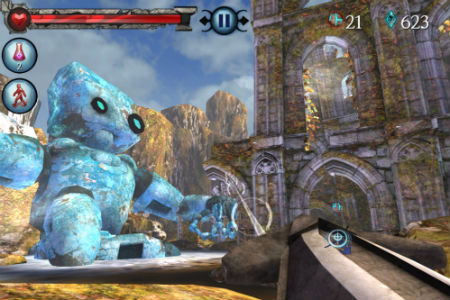 Of all the Infinity Blade-inspired games for which Android users could reach, Horn is the most impressive. From the lush visuals and stunning art design to the satisfyingly tight dodge 'n' slash combat, it's a rich and meaty game.

Again, Phosphor Games Studio wisely accepts that replicating the combat in Chair's seminal iOS outing is not only a step too far but something of a cop-out. So, Phosphor transports you to a full-fledged role-playing game setting instead, powered impressively by intuitive touchscreen controls.

But the bulk of the game revolves around battles against the gracefully gargantuan Pygons, so players who want to focus just on the fighting should be perfectly sated. 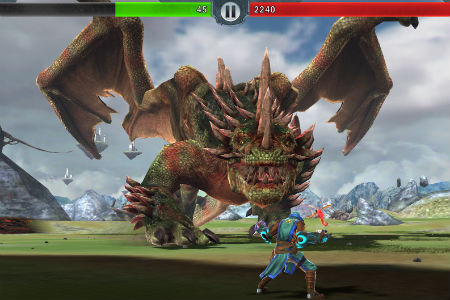 There are some big foes to fell in Infinity Blade. Such is your prowess as an immortal warrior with a magic sword, though, none of them ever makes me feel small.

The boss dragons in Dragon Slayer, on the other hand, never fail to make me feel tiny.

On they come, disturbing the vibration motors in your handset with the force of their colossal footsteps, forked tongues whipping in and out like ships' hawsers, and wings unfolding to blot out the sky. These things are huge.

Fortunately, you've got the magic to take them down. And while there's a typical freemium difficult curve here where you're required to either grind a bit or stump up some cash to get into the later levels, this game has rock-solid combat (careful observation and split-second timing are the orders of the day). 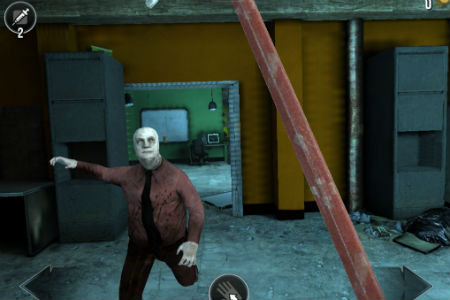 I'm no film critic. In my opinion, though, the movie inspiration for this game was entertaining, often tense, but sadly lacking in genre innovation.

Much the same can be said about this filmic tie-in game.

Sadly for Infinity Blade lovers, the clumsy, imprecise melee combat is probably the least satisfying thing in World War Z. However, the shooting and puzzling elements work pretty well as you blow your way through the stereotypical hordes of mindless undead. Stereotypical but strangely satisfying, nevertheless.

So, it's a good bet if you're looking for more of a cross-genre experience with a little hand-to-hand brutality thrown in. You might want to check out the reviews on Google Play first, mind, to make sure it's not going to crash on your device.