Second and third place winners inside

Pocket Gamer and co. held its latest Big Indie Pitch event in Cologne this week, to coincide with GDC Europe and Gamescom.

The BIP, if you somehow haven't heard us talking about it before, is a speed dating-style show-n-tell where indie game makers pitch their projects to journalists and other experts in blazing fast three minute sessions.

We see loads of games, but there can only be one winner.

And one second place. And a third. And an honourable mention. Because why not. 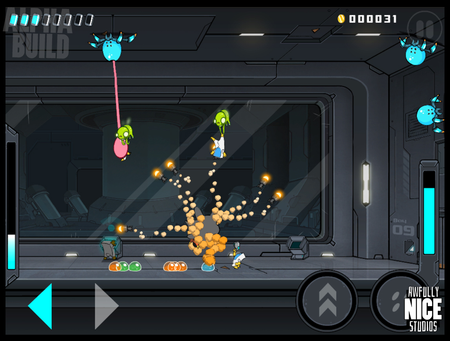 The winning game was Bug Butcher: a chunky, sparky run-n-gun insect blaster. You play as pest control man Harry who darts back and forth, shooting down insects that bounce across the screen.

It's a simple game - you can only fire up and the arenas take up a single screen - but it moves at a breakneck speed, it has lots of creative ideas (like scientists that need saving from traps, and powerups that turn bugs into ice), and it's a blast to play.

The game comes from Awfully Nice Studios, which is Till Aschwanden and Rainer Zottl: a pair of ex Blizzard-devs who have shacked up to form a tiny indie studio in Austria. We'll definitely be watching this duo. 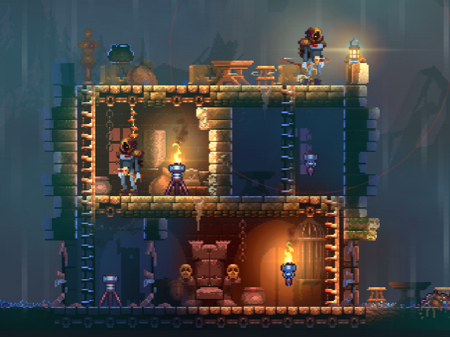 Second place went to Weird Beard for its excellent, but well-known and immediately available Tetris-meets-physics-puzzler hybrid 99 Bricks: Wizard Academy. So we won't go into detail on that. Just read our Silver Award review.

The idea is to hold out in a building for as long as possible to withstand a zombie invasion. Sticking around in one house is smart as you'll outfit it with loads of traps - but staying in one spot makes the zombies more powerful.

So sooner or later you'll need to move on.

The game is all about working together. One player will need to play chef, for example, to keep the trap builders and other workers fed. But once the zombies start chowing down on brains it turns into every man for himself.

Won't somebody think of the children!?

The judging panel gave a special mention to a game called Adventure Playground. We saw a bunch of kids games at this BIP, but they don't always attract a lot of votes. So we gave a honourable nod to our favourite of the bunch.

This German-made game comes from one man - Jan Essig - who wanted to make a fantasy app for his children. He came up with a collection of cute mini-games for kids of 4-7 years old with an adorable fantasy style.

The game will be out in November as a paid app.

We saw loads of other games - including a Mongolian yak racing sim, a location-based game that works exclusively in Cologne, a clever mix of Puzzle & Dragons and Boggle, and a space game made by real space experts at the European space agency. More on those, soon.

Thanks to Upsight, Samsung and The Trailer Farm for sponsoring this event
Next Up :
Apex Legends Mobile release date and everything we know so far