1994’s Beneath a Steel Sky is a game I’ve heard a fair bit about but never actually got around to playing. It’s a classic point-and-click adventure game set on a dystopian Earth ravaged by the long-term damage of pollution and radiation.

As I said in my little news piece on Silk, it’s always interesting to try out games that dabble in dead genres or outright attempt to resuscitate them. I wasn’t around for the vast majority of the 90s, and I don’t have the hardware required to play a lot of these older titles, so a game like Silk or a sequel like Beyond A Steel Sky are always welcome in my book. 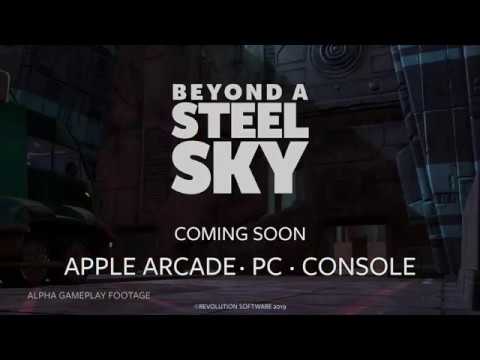 The long-awaited sequel is set to come to Apple Arcade. It’s being written by series veteran Charles Cecil, with art direction from Dave Gibbons, and it’s said to feature the same mix of humour, drama, and cyberpunk stylings that made the 1994 original so popular.

The game is set in what the team are calling a ‘dynamic gameworld’. What this basically means is that the characters and world around you will respond to your actions. By interacting with the characters in unique/imaginative ways, you’ll be able to uncover alternate solutions to the game’s many puzzles.

The latest trailer shows off the perimeter of the city. It focuses on highlighting the impressive environmental designs and some of the basic gameplay challenges you’ll face, including what looks like a small puzzle.

Our old reviews editor, Harry, wrote a nice piece about his experiences with the original game and his hopes for its sequel. I'd definitely recommend giving it a read.

There’s still no firm release date for this one, but we’ll be sure to let you know once more info arises. In the meantime, you can sign to receive developer Revolution’s newsletter for the latest updates on Beyond a Steel Sky.