In particular, Battlecruisers' upcoming update will feature five new AI enemies along with five new weapons and buildables. This also includes the GatlingMortar and the SteamCopter to name a few. Players can expect better accessibility plus a simpler and cleaner UI as well. Furthermore, the new update will add new boss fights, a destruction score, new rankings and even a new ending as a special surprise.

Available in 12 languages, the indie game has received positive reviews on Steam since its official launch in February last year. Players can build their warships and bring chaos across 25 levels and four modes of difficulty. 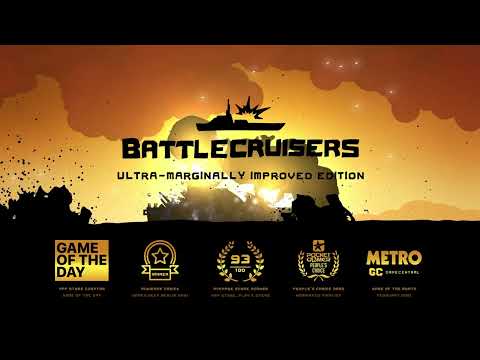 "Humans are long gone, and our robot descendants are reckless, trash-talking, and power-hungry," says the game's official description. "You play Charlie, an opportunistic utility robot who takes an unattended Trident-class battleship for a quick spin around the harbor. The only problem: it belongs to the world’s greatest superpower."

If you're keen on experiencing the visually stunning hand-drawn art and exploring the post-apocalyptic ocean-filled world of the game, you can download Battlecruisers on the iOS App Store or on the Google Play Store for Android devices. You can also have a look at the embedded clip above to get a feel of the game in case you're not familiar with it, or join the community of followers over on the official Instagram page to stay updated on all the latest developments.

Are you on the lookout for more similar titles that will put your skills to the test on your mobile device? Why not take a gander at our list of the top 25 best strategy games for Android phones and tablets in 2022?