To play or autoplay: How mobile games are asking for more time and less skill

Welcome to the latest in our series of Pocket Gamer columns. We're taking the best games writers in the industry and giving them a platform. Veteran journalist Jon Jordan is here each week examining the trends shaping your mobile games scene. This week he's talking about autoplay.

While most criticism of free-to-play game design focuses on monetisation, that's not its most radical aspect.

Previously, progress in a game was gated by player skill.

Granted, the further you got into a game, the more powerful your avatar became, whether that be in terms of the available guns, spells, cars, dragons, tanks, central forwards, etc.

But the fundamental building block of process was always the capacity of the human brain and nervous system to get better at doing the game's basic moves - brake and drift, circle strafing, jumping on koopas, and so on.

Time was an aspect of this but, as every middle-aged gamer eventually discovers to their shock, time is not a sufficient component for progress.

With free-to-play games, however, the situation is reversed; time is now the core component of in-game progress.

The reason is obvious. As we know from Economics 101, time is money and allowing people to spend money to speed up their progress is the basis of free-to-play monetisation.

Yet, it doesn't mean there's no place for skill in free-to-play games. Knowing how to build out a squad to win a specific battle in Star Wars: Galaxy of Heroes requires deep knowledge about character attributes, for example. 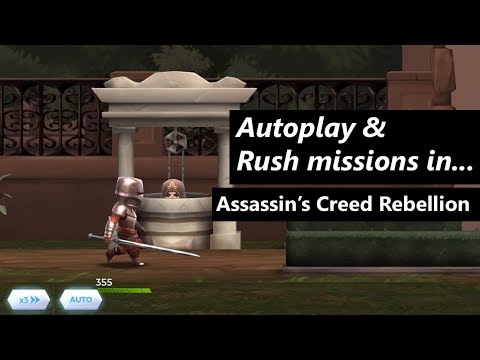 But only when the time-is-money element is removed from F2P games, as in the case of competitive esports, do they become truly skilled-based.

Being a middle-aged gamer, I'm all for this revolution, of course.

I don't have much time, but I have more time than skill. My problem is my time is fragmented into thin slices and this places a further complication on F2P games.

Not only do they need to replace skill with time, but they have to ensure their core time-based components match their players' lifestyle.

For example, if I can't complete a level in five minutes or less, that game is unlikely to stay on my iPad for long, which is why autoplay is such an important element of the games I regularly play.

And that's why I'm glad to see Ubisoft's F2P Assassin's Creed: Rebellion - which has been in soft launch testing for nine months - has just added instant wins and autoplay to its missions.

Prior to the update, I was struggling to engage with it. Despite its great art style and decent base- and character-building metagame, having to manually play each of the levels was just too slow and boring.

Now, however, I can attempt to Rush previously completed missions for instant rewards, or autoplay new missions at 3-times speed. In this way, I'm playing the game faster and I'm progressing through the metagame faster too.

Purists will, no doubt, throw up their hands in disgust and maybe the game's designers have had to eat a slice of humble pie too. Presumably they didn't originally include an autoplay option for a reason and now have had to create more content as people are levelling up faster.

Nevertheless, when Assassin's Creed: Rebellion is eventually released, time-constrained gamers will rejoice, as I do now.

It still has plenty of pacing issues, especially in terms of character unlocks, but the result of adding autoplay is a game I was struggling to play once a week, I'm now enjoying on a daily basis.

If this column has given you food for thought, share your comments below and bookmark Jon Jordan's page for more of the same next Monday. Remember to also check out words of wisdom and mirth from experienced games journalists Susan Arendt and Harry Slater each week.
Next Up :
Need friends for Mario Kart Tour Multiplayer? Share your friend codes here! (30k+ codes!)