Out now: Asphalt Overdrive is a free to play retro endless-runner/racer hybrid

We might be starting to lose count as to how many Asphalt racing titles Gameloft has on iOS and Android, but this latest one is worth revving up.

Asphalt Overdrive offers an unusual take on the popular driving franchise by adapting it into something of an endless runner set in the streets of 1980s California, and coming in at the bargain price of 'nowt.

Rather than playing with an on-screen steering wheel or tilt controls, all you do to put your pedal to the metal is swipe to shift lanes in Asphalt Overdrive. Sounds kinda dull, but it actually works well.

You can fill up your nitro by side-swiping other cars, which comes in handy as you flee from the cops, perform stunts, and earn in-game cash to upgrade your motor. There are 30 different licensed '80s-chic cars to unlock (not least a DeLorean) and weekly objective planned with multiplayer elements.

As this is a free-to-play game, you can naturally fill the tank via in-app purchases, but at first glance it seems like Asphalt Overdrive is a pretty forgiving game, making it easy enough to earn your upgrades as well as buying them.

It's out now on both Android and iOS, so go take it for a spin and let us know your thoughts in the comments section below. 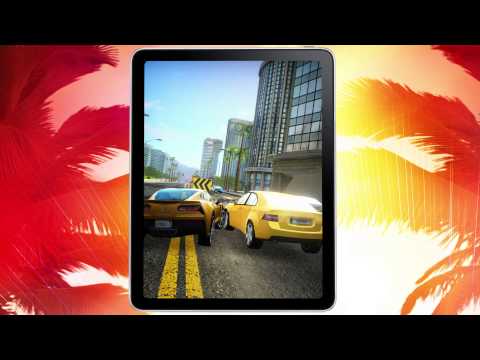