Three and a half years ago, in what must surely be the most begrudging 9 out of 10 review ever, I spoke of my "slight twinge of disappointment" at Mario Kart 8 Deluxe.

This disappointment was nothing to do with a lack of quality in Nintendo's cleaned-up Wii U port, but rather a lack of novelty.

It's tempting to suggest that Nintendo is trolling us with Mario Kart Live: Home Circuit. 'You want novelty in your Mario Kart? We'll give you novelty.'

That would be to undersell the level of ingenuity and love that's gone into this idiosyncratic package, however. Home Circuit might not be a particularly great Mario Kart game, but it's a wonderfully put together toy.

And we mean that quite literally. Nintendo supplies a neat, compact remote control kart that maps to your Joy-Cons. The handling is suitably tight and grippy across carpet and hard floor, and you can cycle through the usual cc options with a resulting uptick in the real kart's speed. 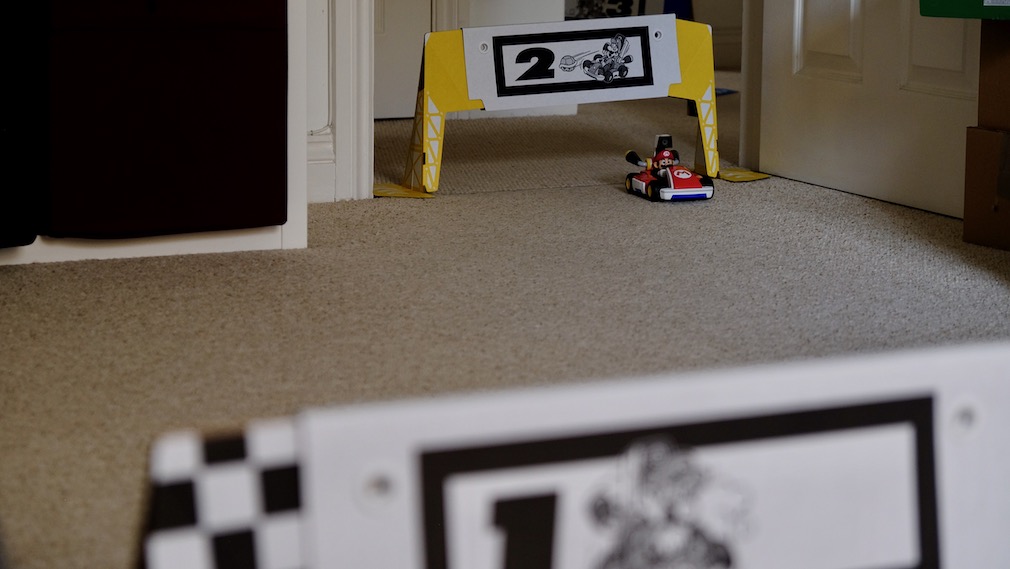 Along with the kart comes four cardboard gates and a couple of barriers. These gates are employed as AR markers, which form the bones of your custom track creations. You see, the aforementioned RC Mario has a forward-facing camera stashed away above his head.

Not only does this grant you a third person ankle-height view of your race on your TV, it also combines with those gates and the Switch to build a series of virtual tracks around your immediate vicinity.

The shape and size of these tracks don't tend to vary all that dramatically - think basic loops and figure-eights. I was a little disappointed to have my plans of an apartment-spanning course thwarted by the requirement to have the Switch within line of sight of the kart at all times, and the range isn't vast either (within 5 metres).

Variety is added by the AR element, which will layer various Mario Karty themes over the top of the gates and throughout each track. Environmental factors like wind and magnetism will smartly affect your kart's handling, while Thwomps and Cheep Cheeps will get in your way, as is their wont. 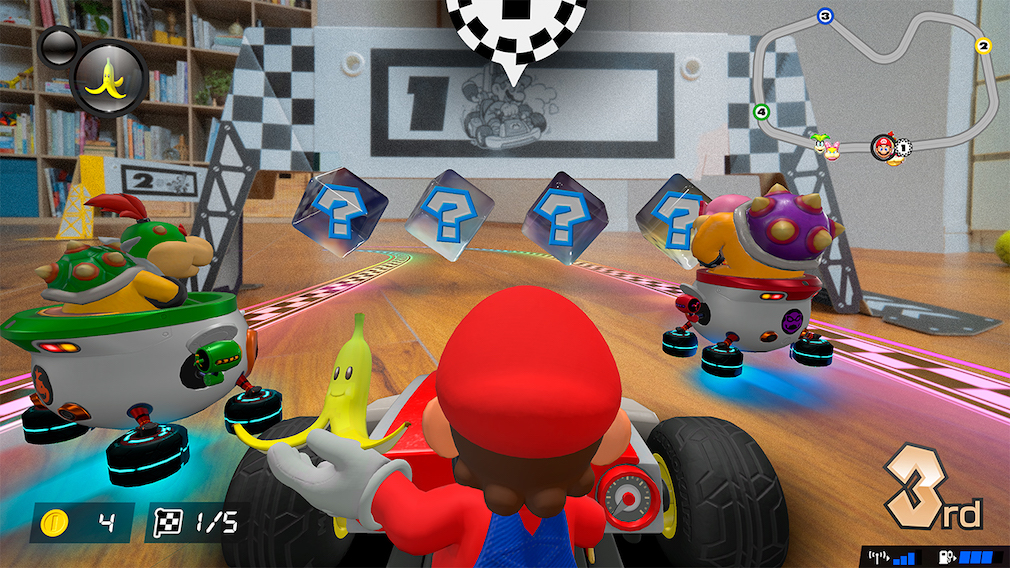 You can still pick up and use items, and they behave much as they do in any other Mario Kart game. A red shell is still really useful, and a blue shell is still really annoying. These are put to use againsta small handful of virtual baddies across a familiar batch of grands prix and time trials.

All of this is very clever, not to mention tremendous fun to set up. But those aforementioned technical limitations, and the inherently basic nature of the racing, threaten Mario Kart Live: Home Circuit's long term credentials.

It's all really entertaining for the opening hours, but ultimately Mario Kart 8 Deluxe is a much richer, deeper and cheaper prospect - albeit a more traditional one.

That game also offers a suite of ready multiplayer options that Home Circuit simply can't match. Sure, you can pair up a second kart for some real Mario Kart vs action, but who's really going to buy a second kart at £100 a pop?

It's questionable whether you'll have the space to do so too either. Mario Kart Live: Home Circuit isn't so much intended for big houses as it is a single big room, and one with plenty of open floor space. I don't know about the rest of the world, but that will inhibit its appeal across an awful lot of UK and European homes, not to mention in Nintendo's native Japan.

Mario Kart Live: Home Circuit is an ingenious interactive toy that will light up the Christmases of any Switch-owning kid. But be warned that you'll pay a price for that novelty, both literally and in terms of long term appeal.

TEPPEN is now available in South and Central America regions