I have always wanted to go to a Pokémon-themed café. I mean, I’m not actually all that bothered by overpriced drinks or food which looks like a decapitated Eevee, but the concept? The idea? Absolutely wonderful. And if it could have that cat-café aesthetic and environment which lets me pet the Pokémon, that would be a bonus.

But since I was a small child, I’ve been regularly having mild weeping sessions and existential dread that my one true dream in life shall not come to pass. Unless I get really, really good at genetic engineering (not likely, I am a games journalist, not smart) the dream of petting Pikachu and Eevee can wait. But like all good dreams, video games are there to help.

Pokémon Café Mix is the latest Pokémon puzzle game to hit mobile and Nintendo Switch, and beyond all odds, it’s actually quite good. It has an incredibly cute and huggable art style, and the concept is sweet. After all, a Pokémon café just seems like a perfect mix on paper, right?

But like all free to play puzzle games, Pokémon Café Mix hits its own fair share of problems long before you will be feeling fulfilled by the experience. As much as it hurts to say, this is, for the most part, a very basic puzzler. 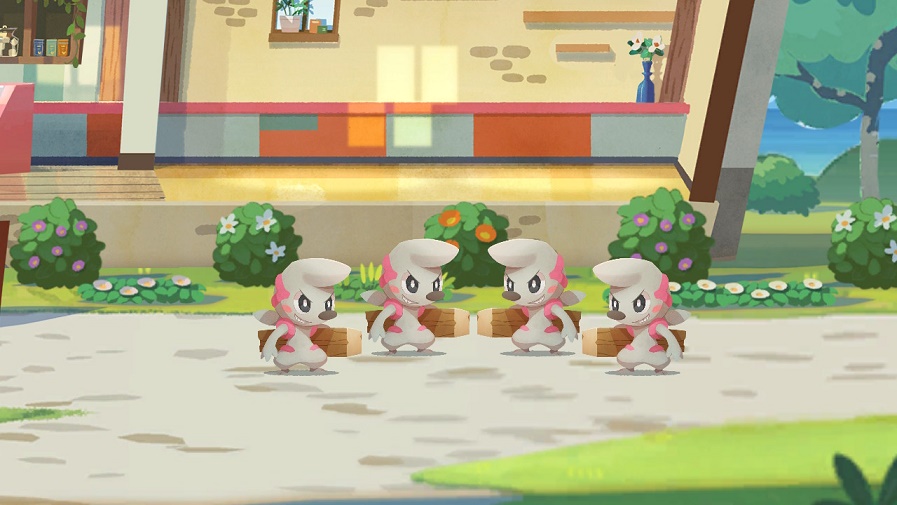 Eevee is a cat, right? This is a cat café?

Playing through Pokémon Café Mix is a simple enough task, as long as you don’t run out of energy to take on stages. You will be given a board filled with Pokémon icons, and you will have to clear out whatever the recipe on the left side of the screen requires.

So, you’ll need to clear 50 Charmander heads? Well, you best start linking all of those Charmander together. Need to get whipped cream? Clear the Pokémon icons right next to the globs of whipped cream, and they’ll slowly get whittled down and collected. Sugar cubes blocking the way? They’ll require icons to broken next to them three times before they split apart.

This is how the game continues to play out. You’ll be given stages of varying difficulty, and you’ll have to continually keep filling these orders, with the shape of the stages changing slightly, and your goal changing with it. Once you progress some more through the game the idea of clearing sugar cubes and whipped cream is a dream, as you’ll have to get through tough nuts and other obstacles that will require the use of special icons, earned through making massive chains of Pokémon icons.

Once you tap an icon, you simply move it around the screen to bash it into other icons of the same type, and they’ll all be collected. You have a limited amount of time from when you tap the first icon, and you can either go as fast as you can to make a huge chain – good when you need special icons more than anything else – or go slow and try to engineer where other icons fall into place.

This is where the “skill” part of the game comes in. You don’t just need to have an eye for matches like in Candy Crush Saga – matching icons together is simple – what you need to do is change how fast you swipe icons and move things around in order to progress. It won’t be long until you come across tomatoes and other icons that require you to place them in a certain part of the stage, not simply eliminate them. This is where slow, methodical play helps. 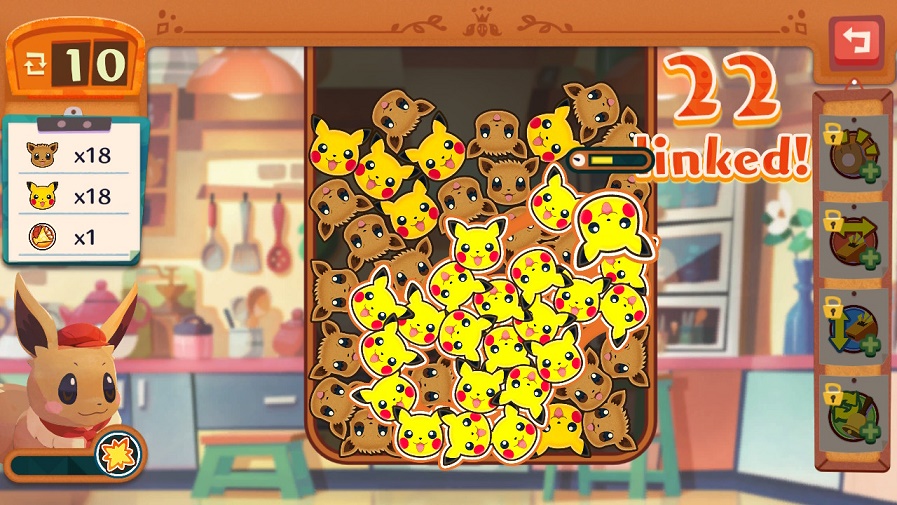 But is this the kind of game where you really want to use slow, methodical play? Eh, it is fifty-fifty. When you first start out you’ll naturally be flying through stages and flinging icons around the playing field willy-nilly, but once you have to start actually thinking through your moves, you’ll become less hasty with your tactics.

As the game increases in difficulty, you’ll start eyeing your abilities more, taking stock of how many icons of each type you have, how many special icons you can create with them, and so on, and so forth. It’s not the most complicated or engaging puzzle game I’ve ever played, but it has a decent amount of content that keeps me coming back for more.

But all of that could’ve been done without the Pokémon. This whole game could’ve been done without the Pokémon. Outside of puzzles you’ll be “improving” your café by hiring new Pokémon (slave labour) and adding new facilities. But they are all, pretty much, meaningless. The game is about you and puzzles, everything else that happens to and around your café is just aesthetic dressing to keep you engaged. And I would be lying if I said it actually kept me engaged.

Pokémon Café Mix is a very cute puzzler, and I wouldn’t begrudge anyone for downloading it on their phone and giving it a blast, but I’ll be shocked if any but the most hardcore Candy Crush Saga fans will keep coming back to it.

Pokémon Café Mix is a cute puzzle game with an even cuter art style, but that adorable aesthetic can’t mask a simple, but tiring puzzler. There’s nothing wrong with this game, and it’s worth a shot, but it’s not likely to keep you playing for more than a day or two.
By Dave Aubrey
| Jun 25 |
iOS + Android + Switch
Find out more about Pokemon Cafe Mix
SEE COMMENTS

List of EVERY Pokémon and food item in Pokémon Café Mix