I first played DanganRonpa: Trigger Happy Havoc as a young reviewer, reviewing the PS Vita version of the game, the very first time the series had been localised. I had never heard of the series before, and I expected absolutely nothing from it. But then, what I found was an excellent interactive visual novel with all of the twists and turns you would expect from an Ace Attorney story. If you have played the Ace Attorney games, you know that I am definitely giving DanganRonpa high praise here.

It has been a decade since the original Japanese release of DanganRonpa: Trigger Happy Havoc, and since then it has become a massive success for Spike Chunsoft, who has seen the popularity of the series explode in the west. I don't mean to brag or anything, but I saw it coming. I knew that if people gave this series a chance it would become a favourite, and it did.

Now we've got three main titles in the franchise, a third-person shooter spin-off, and the plans for the future of the series are wide-reaching. To celebrate the 10th anniversary of the original game we've finally got an iOS release, fully adapted for both iPad and iPhone. Though, the premium price might scare off some potential customers.

So, is it worth playing DanganRonpa: Trigger Happy Havoc ten years later, and is the iOS port as premium as the price? I have the answer for that right here… 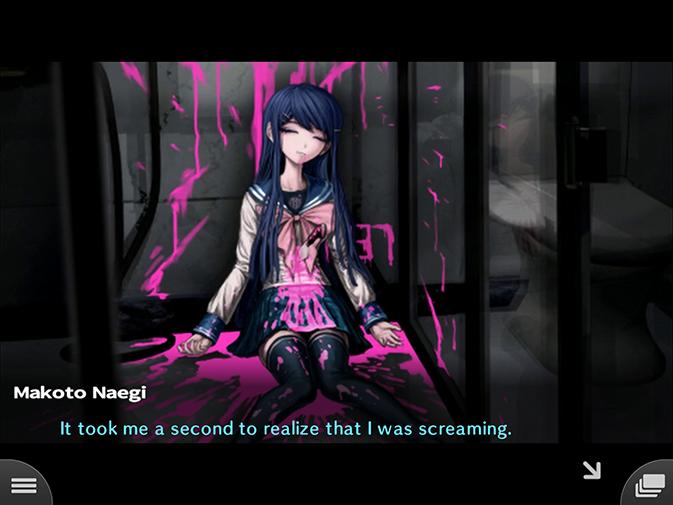 In DanganRonpa you play as Makoto Naegi, a young lad who has luckily found their way into one of the most prestigious schools in the country. His classmates are all top of their field, bright young idols, models, geniuses, and sports stars, and he's perfectly average. That dynamic might be threatening at first, but the greater threat is the school itself: you've all been trapped inside, all of the windows and doors are locked tight, and a menacing monochrome bear demands that you kill one another in order to escape.

What follows is a dynamic hybrid of the beloved Ace Attorney series, with the information warfare of Death Note. You'll be bonding with your classmates and attempting to survive with one another, but after a series of psychological prompts from your captors, something has to snap. You will find your classmates dead, and you will be working against the odds to find out exactly how it happened. Unless you come together as a group to deduce who the killer is, you will all die, and only the killer will be freed. If you guess correctly, the killer dies, and your life as a captive inside the school continues.

Just as DanganRonpa starts fitting into a predictable stride, things change. Character dynamics shift, deaths occur, new areas open up, and the mysteries behind your captivity, and what is happening outside of the school, continues to deepen. Once you've gathered enough clues from exploring the overworld in first-person, you'll be put in what is essentially a courtroom, and present your evidence Ace Attorney-style, while also completing a few goofy and unique minigames to make your case.

The characters are intriguing throughout, the world only becomes more interesting, and the mysteries only draw you in further as the game progress, and as DanganRonpa juggles between a relationship simulator, a visual novel, an exploration game, and a deduction-action title, it manages to keep staying fresh throughout its runtime.

So the answer to the first question then is yes: DanganRonpa is still a great game, and if you haven't played it, you absolutely should. Though it is a linear story, and replaying the game is much more tedious than your first time through. 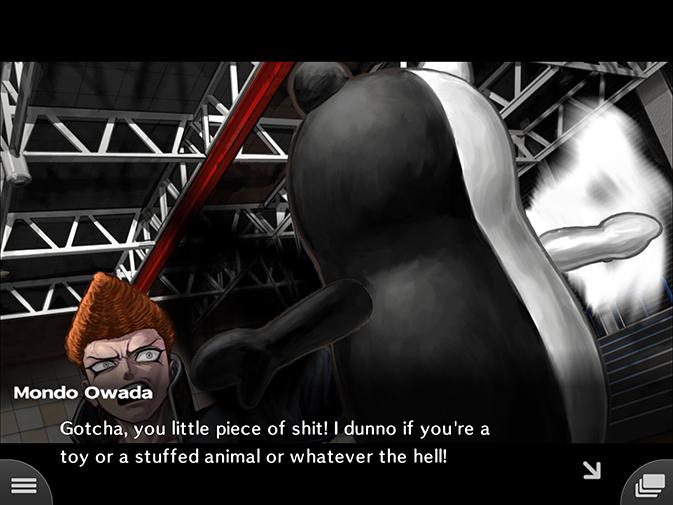 DanganRonpa: Trigger Happy Havoc on iOS is the best handheld version of the game. It's true! Sure, the PS Vita might be the ideal, and intended, way to play the game, but on an iPhone or iPad the game looks incredibly smooth and runs often at a higher resolution than you would see the PS Vita version run at, making for a clearer image, though it does highlight the age and low-resolution of the some of the artwork.

What's lovely is that the iPad versions of the game are perfectly suited to the larger screen - no black bars on the sides of the screen, aside from when viewing a pre-rendered video or piece of artwork. Though, on a device like my iPad Mini 4, I couldn't help but notice that the game was heating up my device quite a bit. Typical Apple design, or a quirk of the game? You decide.

The big question is whether you should play this or, for example, the Ace Attorney HD Trilogy? DanganRonpa is sitting at £15.99 on the App Store, which I would argue is fair for such a high-quality game, but the Ace Attorney Trilogy can be yours for £16.99 - only a quid more, but a lot more content to get through.

If you are in the need for some anime-inspired murder mysteries, then DanganRonpa: Trigger Happy Havoc on iOS is a great choice, but if you haven't played the Ace Attorney Trilogy yet, that seems to be a better bargain. Regardless of which you go for, you should know that DanganRonpa: Trigger Happy Havoc is an excellent adventure that's worth your time.