Happy Style is outwardly a motivational game where you'll complete casual challenges and work your way through a cheery, inspiring story campaign. It's all incredibly upbeat and cutesy, but as I looked into it more, it became clear that something was amiss.

For starters, developer Dmitriy Torgashin lists Geometry Wars, Ninja Gaiden, Forza Horizon, Fruit Ninja, and The Stanley Parable, as well as authors such as Isaac Asimov and Greg Egan, as major influences. It should go without saying that that's a fairly eclectic list, especially for a casual motivational game.

Watching the trailer, I kept expecting some sort of Pony Island-style twist to appear, casting off the friendly, inspiring facade to reveal something altogether darker. But Happy Style seems to be playing the long game, keeping its cards mostly close to its chest while hinting at the strangeness to come.

In fact, Torgashin has gone so far as to call his creation the first game in the 'werewolf' genre, which is defined as a "total transformation of a seemingly ordinary game into something completely unexpected with a different meaning and gameplay relative to the original concept".

Though it's not just about pulling the rug from under players with a single twist or introduction of an unexpected mechanic – these games have to offer a large-scale transformation. Interestingly, Happy Style's weirder elements can be totally skipped over or missed if you're enjoying it at face value, and that, according to Torgashin, is another key part of what makes it a werewolf game. 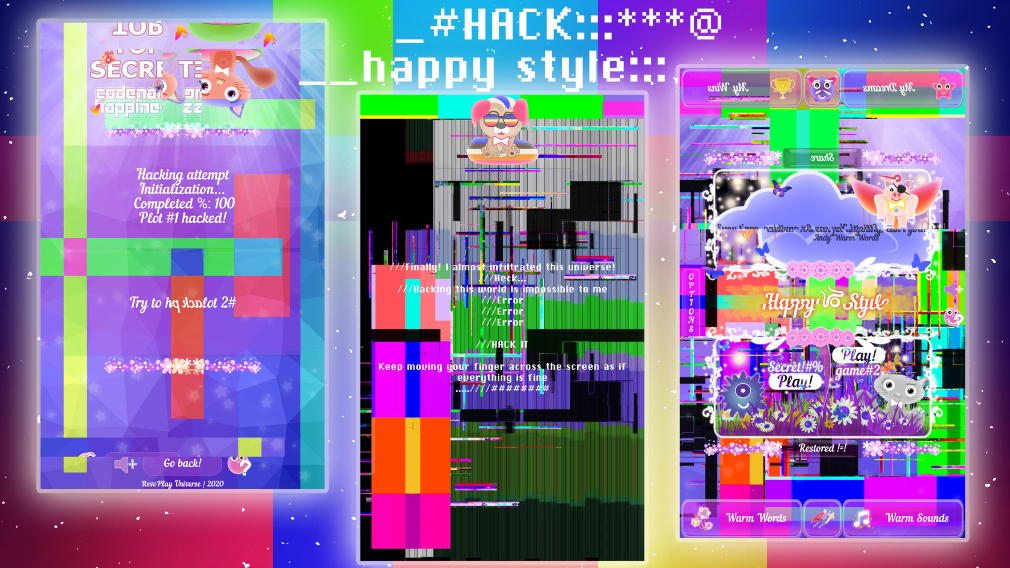 It's certainly very interesting, and it stands out all the more when you discover that it's the first title in Torgashin's planned 'World of Unique Views' series. This will include "many games, books, and projects in other formats". Torgashin plans to expand upon this universe for decades to come.

If you're looking for something properly out of the ordinary, you'll find Happy Style available for download for Android in both premium and free-to-play form. It's set to launch for iOS, Nintendo Switch, and PS Vita further down the line.

Searching for more narrative adventures? Here are some of the best for iOS and Android