Animal Crossing: New Horizons is a salve for the rush of modern life. Much like other ‘slice of life’ games, it helps us to carve out the chaos of our daily life, to toss out any semblance of routine that we have and to replace it - instead - with a softer world. A softer world which moves through time in the same way as our own, but is ready for us to build a new routine and to exert our control as we wish over it. Pure escapism.

New Horizons, however, has picked up a few tricks where previous Animal Crossing titles didn’t. Micro-achievements, the same kind that rustled through MMOs and now populates free to play mobile games, are present in in the form of ‘Nook Miles’. These serve as an alternative to bells for certain features, or as gateways to others. You can pay off your bills with them if you wish, or you can buy certain items with them - but most importantly you can buy plane tickets. 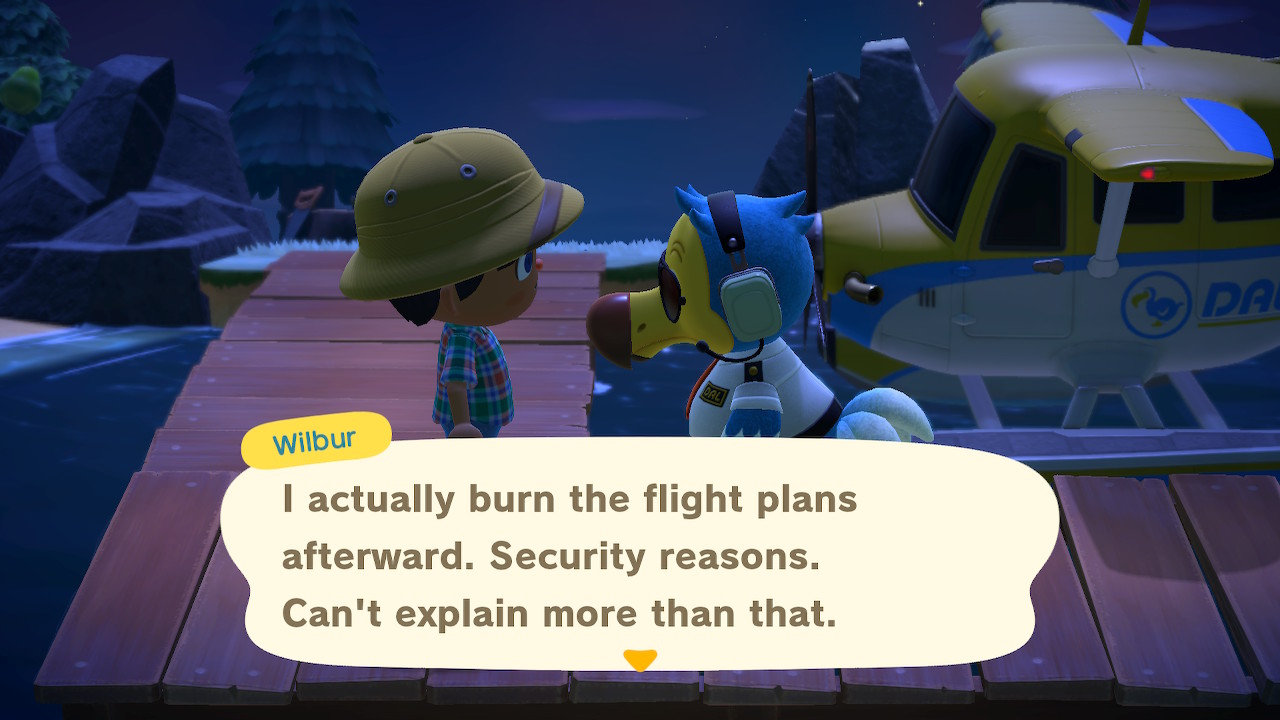 These plane tickets aren’t some meta experience about escaping from Animal Crossing’s world of escape. No. They are best used so that you can maintain the sanctity of your home island. I’ll get to that later though.

Unlocking Nook Miles is pretty simple: You’ll unlock them from hitting milestones, like doing favours for residents, or plucking a certain amount of junk items from the water. There are also daily challenges, which is a rolling selection of five tasks which you can complete while plodding around the island. These are smaller quests - if you will - like catching five fish or selling off some weeds. This adds a little bit of optional direction to a game which previously didn’t do much more than nudge you in the right way to expanding your house.

People like to joke about the laces of capitalism in Animal Crossing, the ones which knot up frequently throughout the series. Part of the humour comes from it being a valid observation: that Tom Nook is an industrious little racoon who definitely seems to be trying to turn a profit at every given opportunity. The other part of the humour comes from the absurdity that this all takes place in a town (or island, in New Horizons) where a human villager lives shoulder to shoulder with humanoid animals, selling fish to said animals all while digging up dinosaur bones. But if the previous Animal Crossing games lined up wisecracks about capitalism, then New Horizons is ready for quips and marker-pen underlines about industrialism and colonisation.

You can trade in 2000 Nook Miles for a Nook Miles Ticket. A Nook Miles Ticket gets you a flight to a freshly generated island - a portion of the size of your home island, The Dodo pilot sees you off with faux military chatter and, well, that’s it, you’re off. These islands do not exist once you leave. 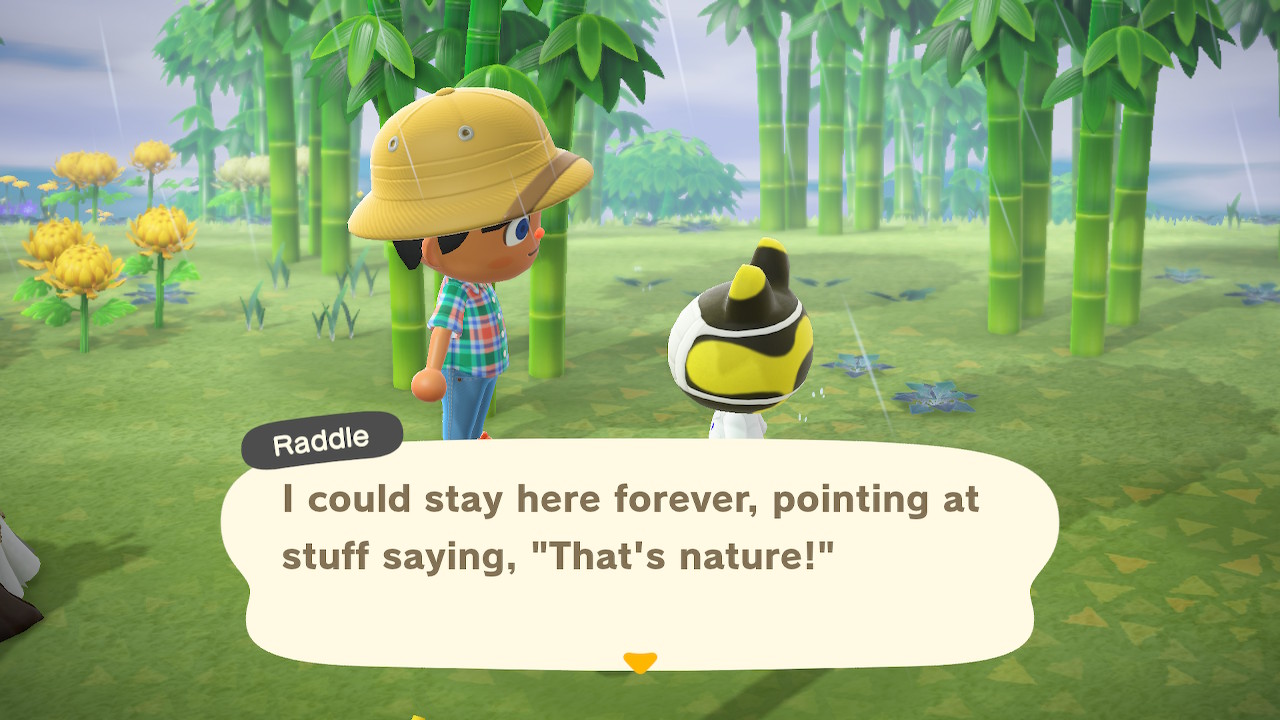 A Nook Miles Ticket can be traded in at the store for 7000 bells - 5,600 if the store is shut because it’s after 10 PM. It turns out that you lose a 20% cut for selling at night… mumble mumble capitalism. That means you’ll need to maximise your time on this random island to make it worth it - you need to earn more than 7000 bells of goods.

It’s 22:23. The store shut 23 minutes ago. I’ve crammed 10 pears into my villager’s goofy mouth. I have done this because eating fruit super-charges you in New Horizons, it means that you can use your shovel to dig up a whole tree or you can smash a rock into tiny pieces. Some islands have potential neighbours on them that you can invite back home, but the one that I’m standing on is clear… completely clear. It’s not one of the islands with bamboo on them either… it’s just a plain island with the same ecosystem as back home.

Stripping the island of resources begins, even down to the weeds, there are 57 in total, that’s 570 bells. I dig up all of the trees, then I pluck the flowers. Then I beat the rocks to see if there’s anything more useful than a plain stone. Then there, in the distance, there’s an old friend, the Tarantula - a lifesaver. They stalk islands in the evenings of the Winter and Spring months, occasionally appearing - ready to dash at you and knock you out. There are 8000 bells in it if you can bag one and sell it before 10 PM, and adding that to my pot brings my total up to 23k from the visit. It’s a dent in the money I owe to Nook Enterprises, but I stockpiled the flight tickets for this reason precisely.

As I caught the tarantula and stuffed it into my oversized pockets something new to Animal Crossing happens. My net pops out of existence. In Animal Crossing: New Horizons tools like the net and the fishing rod are now, like many items in the game, craftable. This means that their uses are finite too though. 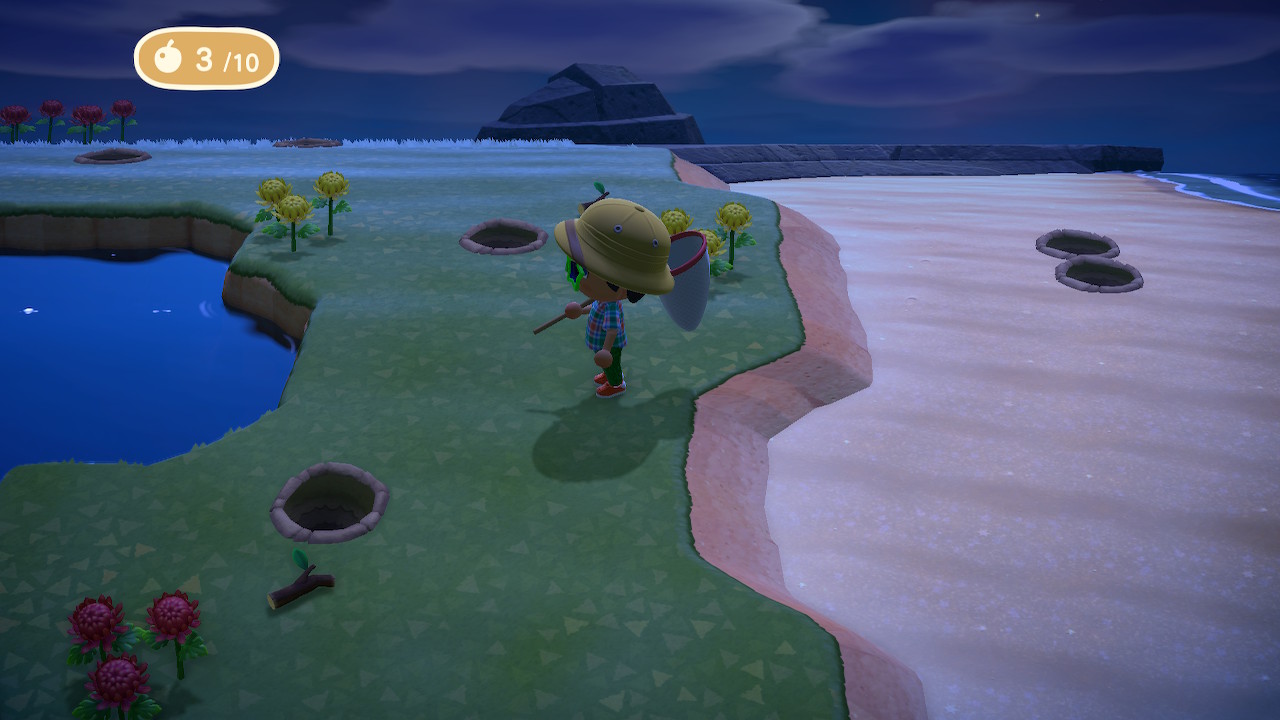 You can craft new ones easily. You just need to shake some trees (watch out for wasps) until you’ve got five branches and then head to your nearest DIY bench. All of the basic tools are now things that you craft by using basic island objects: wooden branches and stones.

This means that it’s easy enough to put one back together, making losing one of them only a slight annoyance, and you can also upgrade them on the same workbenches that you can build them at. The tools being expendable feels somewhat unnecessary - like an initiative put in place to try to introduce the DIY feature - but left in because, presumably, resource gathering is deemed core to the new game design changes.

The thing is... almost everything on my island cost bells or required me to craft objects. Many of the objects crafted were pretty simple - wood here, hardwood here, branches here - but then you get recipes which require items which are finite at times. Materials like fruit, or the minerals which sometimes pop-forth from rocks. 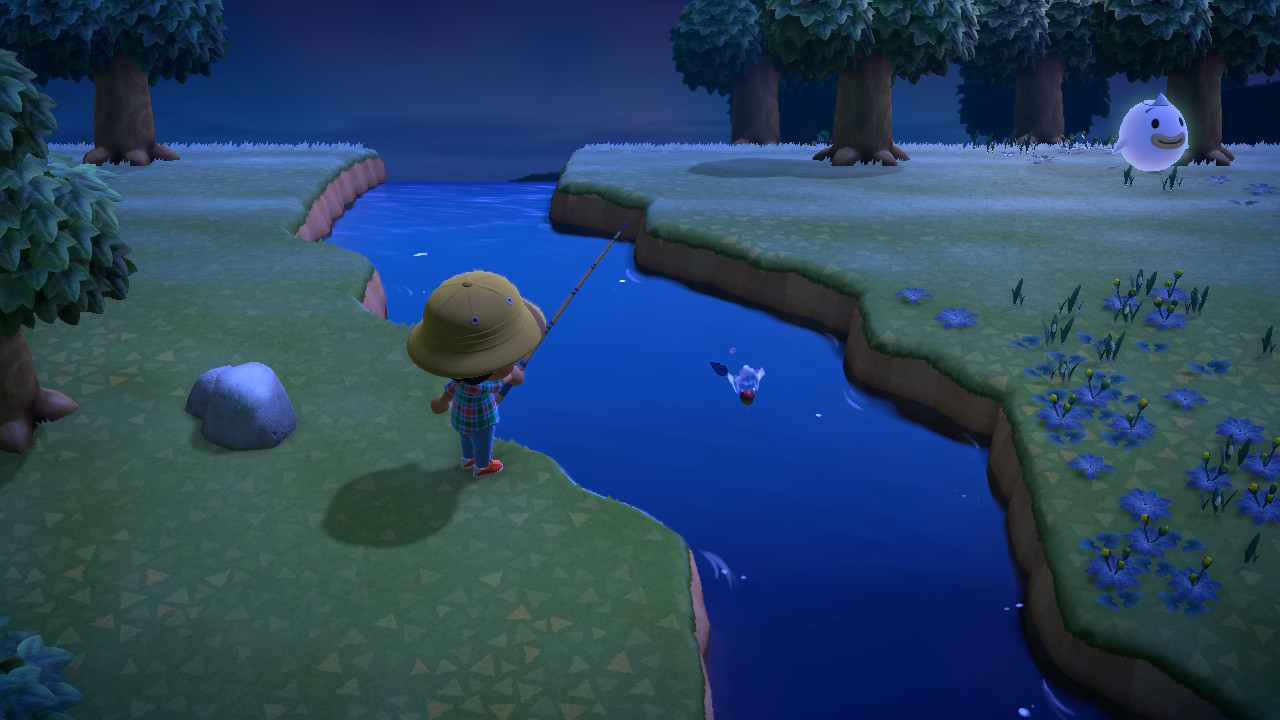 You can’t fish to build fruit beds, you can’t use your net to catch fruit beds - and you need that fruit bed to finish the new house so that somebody can move in. Instead, you’ll need to save up those Nook Miles and get off of your island (or to have stockpiled the fruit) to grab some more of your local fruit. It’s fine, and it plays into the routine of New Horizons, but it suddenly makes some game elements feel like a grind… like a daily grind… like the daily grind that most people would like to play Animal Crossing to avoid.

Grumbles aside, the DIY element of the game completely changes how Animal Crossing: New Horizons compares to its predecessors, and it is undeniably an improvement. I’ve already got somewhere in the realm of 70-75 DIY recipes beyond the basic tools and that number keeps growing exponentially as I do favours for the residents. This adds an alternative way to decorate the town - as you can place any item anywhere on the island - without having to dive into the store or the catalogue. It’s fun and easy to use, and new players likely won’t even think anything about rebuilding tools in this modern age of survival games and looter shooters.

There are other modern influences, or modern conveniences, too. You might be starting from scratch on a desert island, but you’ve got a mobile phone with you from within a short moment of getting started. Just like your own, it’s a repository of knowledge. You can view your progress on Nook Miles, your DIY recipes, the ’Critterpedia’ and a map of the island. There’s also a design app (which can be upgraded through Nook Miles) as well as photography options and an emergency rescue service which I’ve never used because the traversal items - a ladder and vault pole - never break. 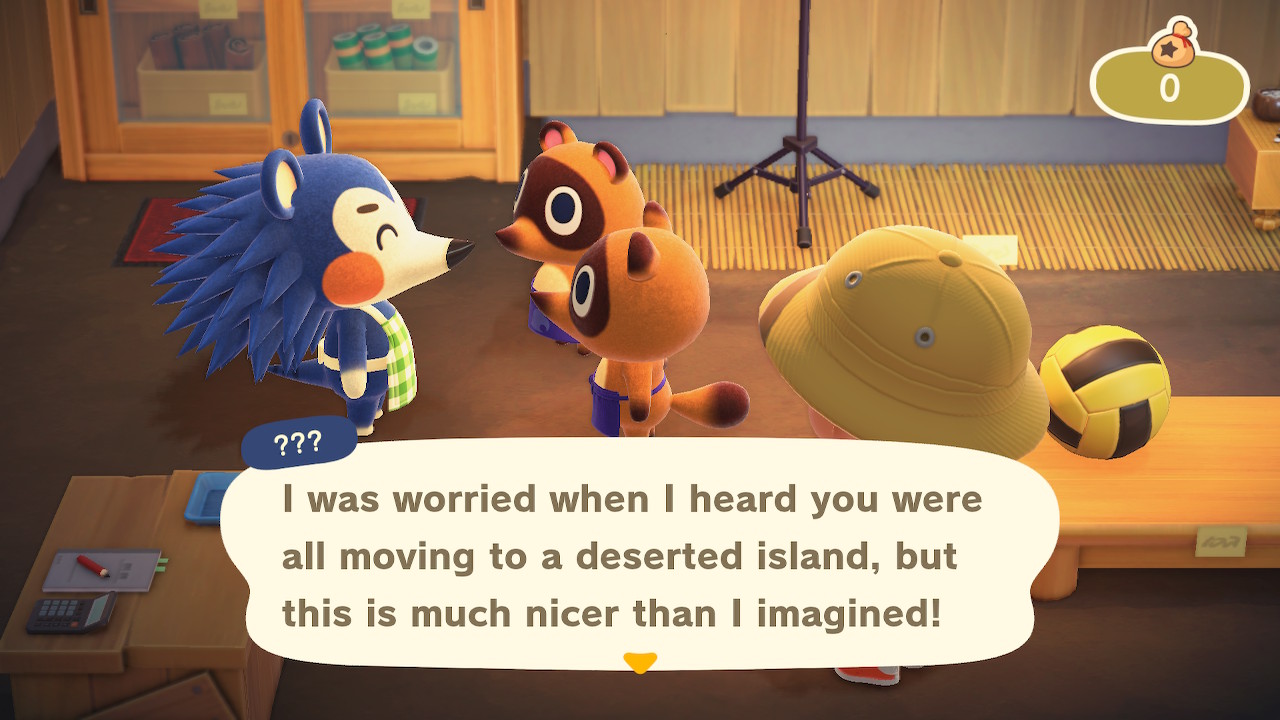 Now comes the hardest part in a review: The synopsis. 2020’s reviews don’t compare to that of a decade ago for many reasons, but it’s harder yet when it comes to games like Animal Crossing: New Horizons which don’t fit into those old fashioned concepts of what makes a game good or bad.

If you’ve played Animal Crossing before then you’ll know the core experience of what makes the game, the new DIY elements and the subsequent ability to harvest random (non-returnable) islands in place of your own will be more than welcome. Familiar faces will pop by too as you expand your island from a cluster of tents to a thriving hub of shops, multistorey homes and more, all complete with paths, fences, lighting and even utility poles.

For new players, beyond the above, the only things to stress are that it’s real-time, and it doesn’t punish as much as other games when you miss a few days.

From me, I miss some of the old hourly music, but I’m fascinated by Nintendo’s next step in Animal Crossing - a series which showcases an advanced mastery of the ‘Live Game’ structure from launch, without updates.

If you are looking to escape from the daily life, into a world where you can’t set the pace, but nobody really minds - and where time is almost just a decoration - then consider Animal Crossing: New Horizons as a balm to soothe the flames of daily life. 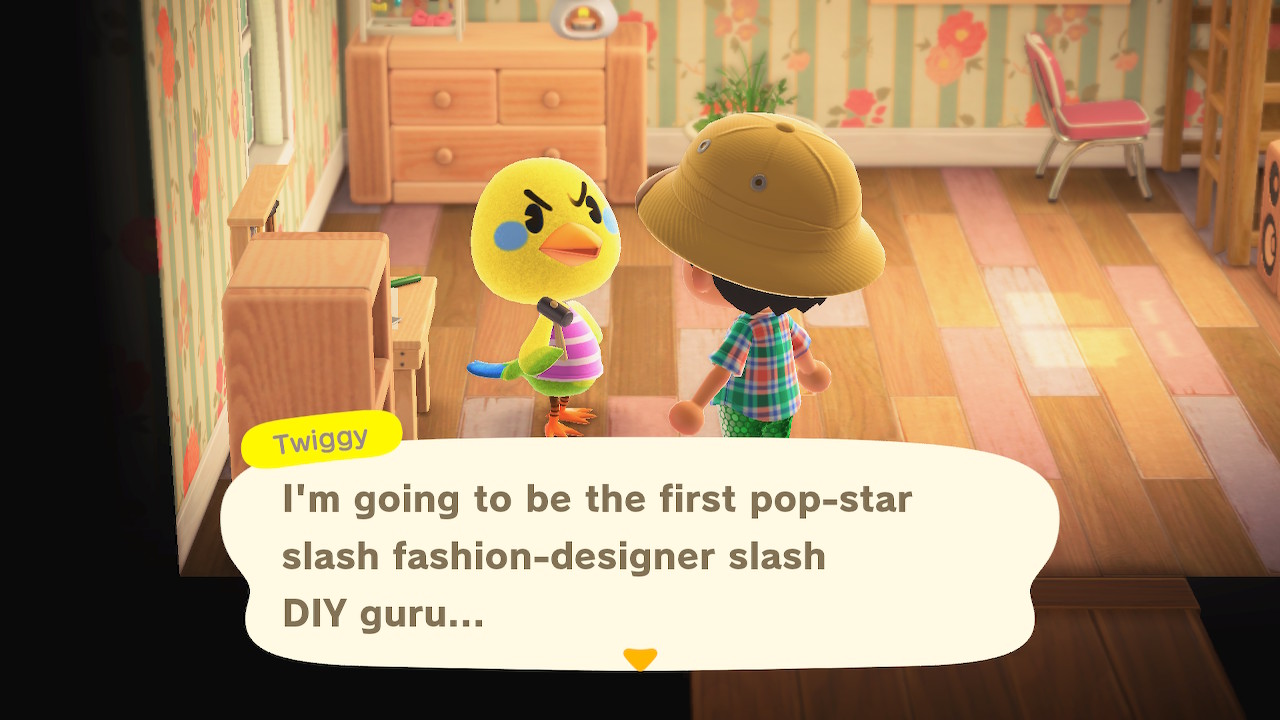 Animal Crossing; New Horizons, much like its predecessors, operates outside of the boundaries of most games. While the most tension you'll ever feel is while sprinting away from wasps, there's a warmth and comfort in the code which you won't find almost anywhere else.
By Dann Sullivan
| Mar 16 |
Switch
Find out more about Animal Crossing: New Horizons
SEE COMMENTS