Ria is a game that promises interesting combat and a vast open world to explore. To put these claims to the test, we enlisted the help of our App Army, who have now put the game through its paces.

This is a game that promised a lot but fell short on delivery. I found everything about the game annoying. The open world was far from open; in fact, I fell from the bridge in the first level and had to start again because I couldn’t get out. Each scene had very distinct boundaries and you weren’t allowed to deviate off the chosen path.

The controls for moving around were far too sensitive and I hated the way it kept zooming too close to Ria which meant you couldn’t see around him, or you could see inside his hollow body and out the other side. When this happened the whole screen jerked which was extremely annoying. Depending on the viewing angle, you could also see Ria or his enemies floating in mid-air.

The enemies themselves were either easy to kill or they had the ability to kill you almost straight away, resulting in me restarting what levels I played quite a few times. As far as the game in general, it didn’t give me anything to really play towards, and with the bugs etc, I soon got bored.

The game has good graphics but unfortunately, that's all, Gameplay, history, physics and control are totally poorly executed. The game looks like a beta and the developers should work harder on the game before it launched. Wish I could name something good in the game but unfortunately I cannot. 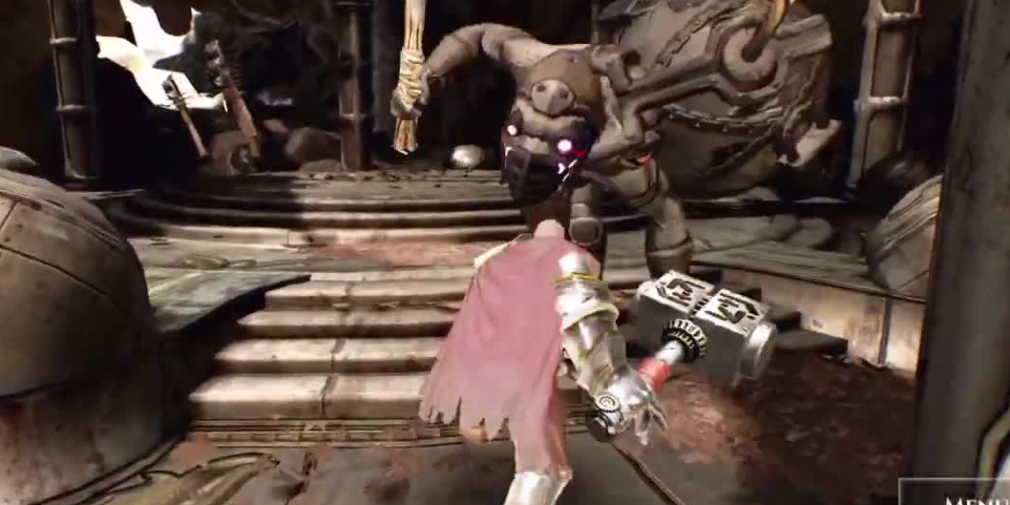 Ria promises an open-world experience with Dark Soul elements. This is an ambitious endeavour for a mobile title. I’ll admit that, even though I have never played the core game, I have an obsession with the Dark Souls formula and a folder for mobile titles that have managed to come close to capturing it. Animus, Harbinger, Dead Cells, and Rogue Legacy to name a few.

The Dark Souls formula has roguelike and random world generation elements, but the core of it is in complex combat, and deep enemy design and combat AI. Owing some of its genealogy to titles like Shadow of the Colossus, where combat becomes a gauntlet, and every enemy could be your last. You don’t need a big development team to capture the spirit of Dark Souls, you could strip away the glam until you are left with the dynamic mathematical patterns that compose a gauntlet.

Ria fails exactly because it fails to grasp any of the fundamentals of what it attempts to create. It is completely crushed under a heavy 3D engine, combat is uninteresting, rolling behind an enemy and slashing away for a full minute while it faces away and attacks empty air. The voice acting is far off. The entire experience feels like a tech demo for a game engine without much promise.

There is just nothing of the Dark Souls essence in Ria, there is no open world, just maps connected by orbs awaiting texture and even enemy generation remains static across play sessions. It is hard to imagine such an ambitious premise to be so utterly uninspired in its execution.

Ria just didn’t click with me. The controls are fiddly and seem quite unresponsive. The graphics are decent and the music fits the genre well but it just felt a bit too similar throughout. Some like the grind that comes with games like this but I like to feel that I am progressing through a story or something a bit more than just "kill a load of demons". Not really a game for me.

I’ve played it a few times but keep dying, while I know it’s based on Dark Souls. I find the game has issues that let it down. Camera angles - sometimes it renders from inside the character. Not good in a battle, and the AI is hit and miss.

You can just dodge behind larger characters. While they attack thin air, just spam them until they die. Smaller enemies cause more issues as they have a tiny hitbox. I wish there was a 180 camera turn. I’ve been killed by enemies I can’t turn around in time to kill. Maybe it’s just me but the game feels like it is incomplete, it shows promise. But I’ve encountered invisible fences in places I should be able to go through.

Don’t get me wrong, the main character looks detailed and so do some enemies. There are decent animations and voice acting. However, little things let the game down (no textures loading a few times I just get a chequerboard pattern). I hope they can patch it. So far I’m not feeling it as much as I hoped; it just feels incomplete, I can’t put my finger on it.

It's hard to review Ria as it seems closer to a tech demo than a finished game at the moment. The graphics are nice but the controls are poor and the story non-existent. I could give some anecdotes of my times playing but much like every other App Army member, they were less than underwhelming.

I wish I could say something more positive about Ria than the previous reviews, but that will not be the case. The controls are sluggish, the camera and character constantly get stuck on the environment, and the narrator is uncomfortably try-hard while providing zero story or motivation.

This being said, the thing that bugs me the most about Ria is their open-world claim. The great thing about an open-world game is that you can literally go wherever you want in that world. However, that also means you need to have somewhere in that world I’d want to go. Ria fails to provide any destination of interest; it’s beige-grey nothing with endless enemies and zero meaning.

If there were any quests, shops, towns, NPC’s, or anything at all of interest, then you could claim it's open-world. Right now, Ria could be a flat expanse with regenerating monsters, and that would actually improve the game because the stupid camera would stop clipping. If I hadn’t been reviewing this for App Army I would have put it down in less than ten minutes. As it is now, Ria feels like a testing environment for the real game that someone is creating. Stay far away.

Oh dear, this game is a bit of mess. Graphics and sound are ok, but you can get stuck on the scenery and it’s not always obvious whether you can enter a building even if the door is open. The dodgy collision detection also means your hero partially disappears into walls and rock formations.

Battles can also suffer: a small spider was damaging me even though I was nowhere near it and a large spider got stuck on the scenery allowing me to kill it. The game is just too clunky to be enjoyable to play. It's a big disappointment.

I gave this game a fair chance. But it had almost no tutorial. There’s still a button that I couldn’t find a purpose for. The “open-world” really isn’t an open-world, as someone else has already stated. Each level is open in the sense that it’s outside? But other than that it is a very limited area with boundaries that I found without wandering very far. You enter and exit each area via a floating globe.

The combat is boring and uninspired. It’s a simple matter of mashing a button to bash your opponent. You can try to dodge out of the way (which doesn’t always work) and you can try to refill your health mid-combat (which doesn’t always work), but soon you’ll find yourself fighting huge monsters who are pretty powerful for a first level. Health renewals cost you 100 souls that you gather slowly by killing opponents.

I found the graphics mediocre at best. The character moves unsteadily at times. More often than not I could see his feet floating above the ground. All in all, for a premium game that still tempts you to avoid the grind with IAP, Ria sets the bar very low in almost every aspect. You can do better without paying, and I can’t recommend this title. Deleted from my phone quickly.

Looking forward to playing this game when it’s finished. As others have said, this plays pretty badly and is in poor shape right now. The controls are awful and the game just looks glitchy. No way can you compare the combat to dark souls, they are unresponsive and gives little feel to your actions. Definitely one to avoid.

Well here are my thoughts on the game: It feels like Ria is an unfinished project. While the graphics look decent, the gameplay is lacking. You are thrown into the game with an absolutely basic tutorial and no story whatsoever and you have to figure out everything on your own.

Not that there is much to figure out. The game’s “open world” is just a collection of areas connected with teleporting spheres and filled with monsters and nothing else. You fight the monsters and collect their souls which you use to upgrade your weapon or buy potions. The combat is inspired by the Dark Souls games (even the AppStore description of the game has the words Dark Souls 4 or 5 times in it), but I felt it was very stiff and repetitive. Overall the game seems to have potential to be something good but it’s not there yet.