Football Manager 2020 Touch is everything I imagined it would be. Having been hooked on the series since its humble Champ Man beginnings, I’ve come to realise some instalments are more iterative than others, but even when scaled down for tablet devices the end result is rarely anything less than a definitive simulation of the beautiful game.

Every year developer Sports Interactive is faced with an unenviable task: how to improve on what many call perfection. The studio has, on occasion, been accused of complacency, though such complaints cannot be volleyed in their direction this time. FM20 Touch is the game we know and love, complete with a raft of smart additions that richly reward perseverant players.

While many of Football Manager 2019’s headline features, such as the revamped tutorials and streamlined tactics system, were designed to make the game more accessible to newcomers, FM20 Touch is one for the hardcore fans. It’s been kitted out with a new feature set that feels like a reward for the unwavering faithfuls, to thank them for sticking around all these years.

If, like me, you’re the kind of FM Touch player who likes to bed themselves into a save game for a lengthy tenure to rival Arsene Wenger’s Arsenal career, new features like the Development Centre will help you build towards a brighter future for your club. This is a hub where you can monitor the progress of your youth talent, players who are out on loan and your reserve team’s results. 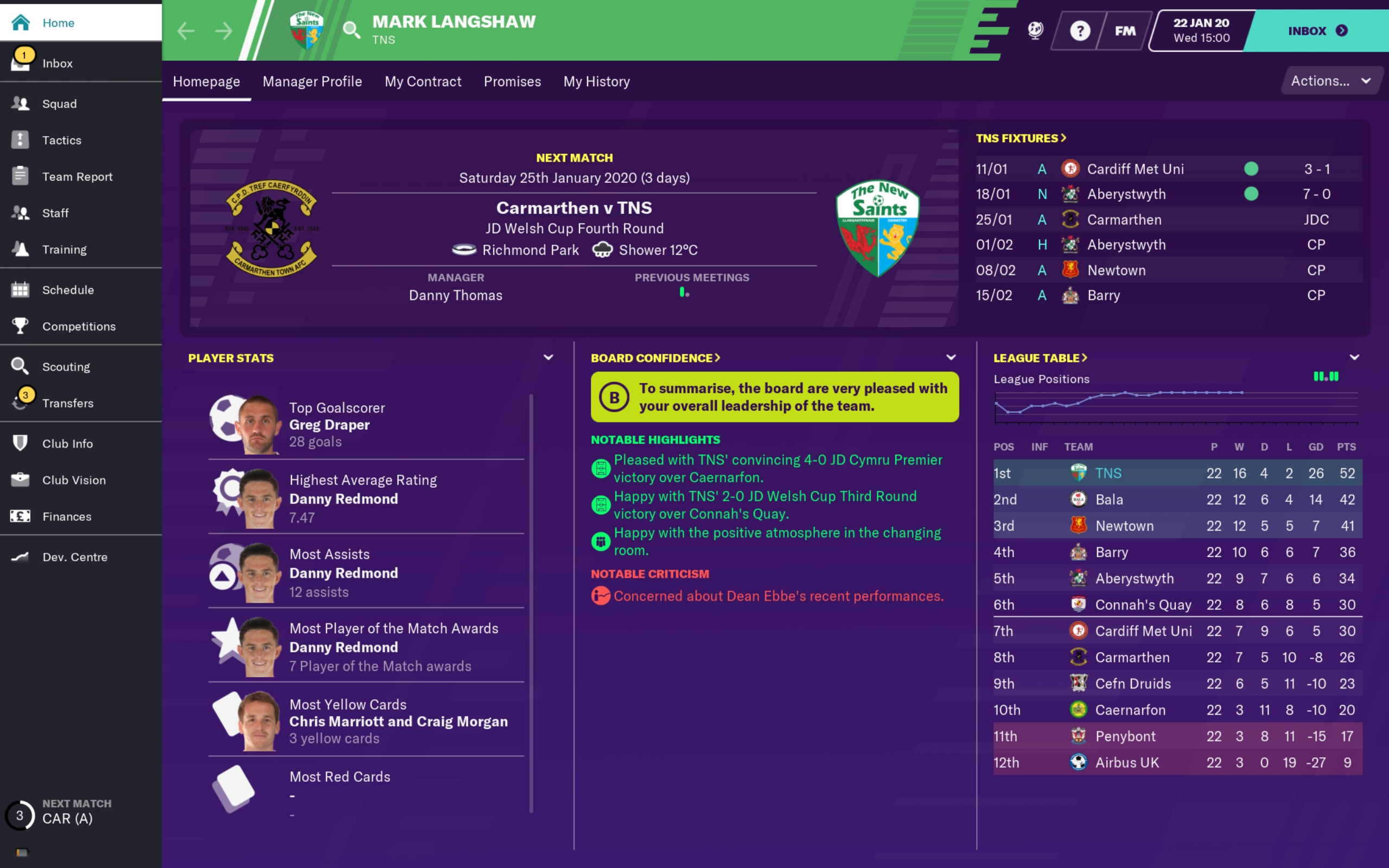 Whether you’re managing a dominant force like Italian giants Juventus or a small fry such as Welsh outfit Barry Town, bringing fresh talent through the ranks and nurturing newgens is one of the most rewarding aspects of Football Manager. There’s nothing quite like seeing that fledgling wonderkid you’ve developed set the league alight and rise to Cristiano Ronaldo-level stardom over the course of multiple seasons.

Thanks to the Dev Centre and its role in bringing so many vital statistics under one umbrella, turning academy products into the legends of tomorrow is more achievable than ever. Perhaps the hub’s most useful feature is flagging up exactly when your most promising youngsters are ready for a taste of first-team action, taking much of the guesswork out of your progression plans and removing the threat of ‘too much, too soon’.

It’s often the case that the Touch editions of Football Manager miss out on key features included in the full-fat PC version, in the interest of keeping things mobile-friendly, so it’s good to see a major new addition like the Dev Centre find its way to tablets alongside the obligatory tweaks and refinements.

At its core, FM20 Touch isn’t a radically different game to last year’s instalment and that’s hardly a terrible thing. With the shiny new Dev Centre and a lorryload of incremental improvements in place, it dethrones its 2019 predecessor as the most definitive football management sim on iOS and Android. Okay, so the majority of its app store competitors are the genre’s equivalent of jumpers for goalposts, but it’s an impressive accomplishment nonetheless.

FM Touch has always been a condensed version of its bigger brother on PC, reworked for touchscreen interfaces and streamlined for consumption on the move. It places you directly in the management hotseat and gives you control over virtually every aspect of head coachery - if that much wasn’t obvious already. Databases remain vast, tactical options plentiful and the version of the 3D match engine Sports Interactive has brought to tablets continues to see subtle improvements. In short, the development team is still making the right concessions when scaling the game down, for the most part. 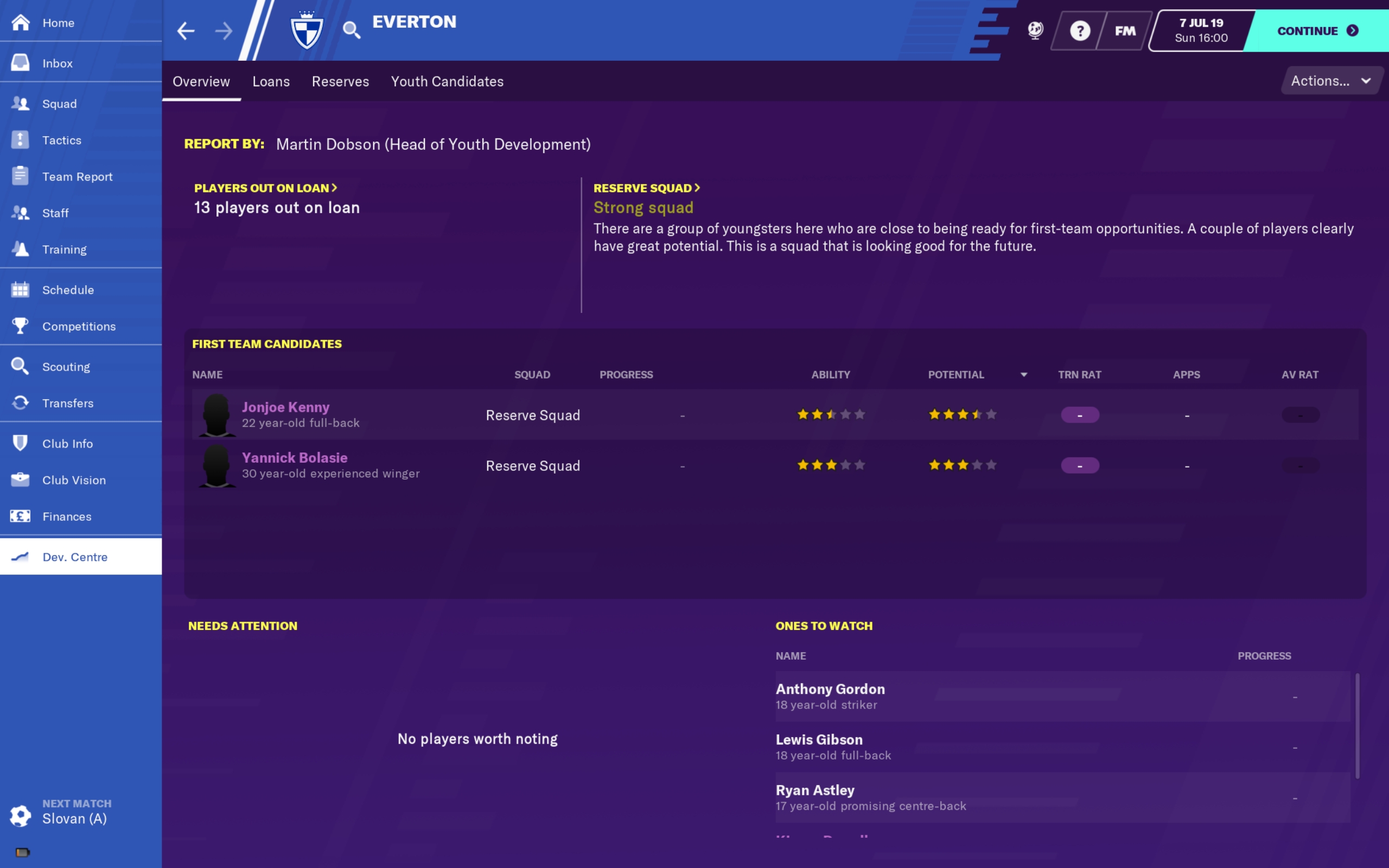 The option to skip pre-season and simulate matches makes FM20 Touch a good fit for tablets – less time-consuming and easier to drop in and out of - while limiting the touchline options on matchdays helps make it palatable for on-the-go players. That said, there are features from the PC version that could, and perhaps should, have made their Touch debut by now.

I’ve never really understood why media interaction is almost entirely absent from FM Touch. Multiple-choice press conference would be work well on touchscreen. They’d be simple enough to blast through and their inclusion would give players another tool for moulding team moral and immersing themselves in the in-game world. No doubt Sports Interactive will tell you they jettisoned press conferences to keep FM Touch streamlined, but why not make them optional? You have the choice to skip entire matches, so media interaction could work in much the same way.

FM20 Touch’s other new features are largely cosmetic. Menu screens are sharper and more colourful, decorated by brighter club emblems (the ones the have the licenses for, at least) and imagery, but most pleasing of all, the game actually runs smoother and faster than FM19 Touch when played on the same hardware. I sunk countless hours into last year’s edition on the same Samsung Galaxy Tab S4 I’m using today, and FM20 Touch zips between screens noticeably slicker.

FM Touch’s 3D match engine is given subtle enhancements every year, many of them under the bonnet and invisible to the naked eye. This year, it doesn’t look radically different to 2019’s though the improvements are there if you look close enough. New frames of animation can be spotted when players chest the ball down or swerve to avoid an incoming challenge, but this is minor stuff.

What’s disappointing is the fact this year’s 3D match engine feels in need of some fine tuning at launch. For the most part, it’s an accurate representation of how a professional football match plays out, although it shouldn’t be easier for your strikers to score 30-yard screamers than close-range tap-ins. Hopefully a quick, post-launch patch will address this imbalance, and the ugly bug that causes stadium sound effects to cut out at random (on my device, at least). 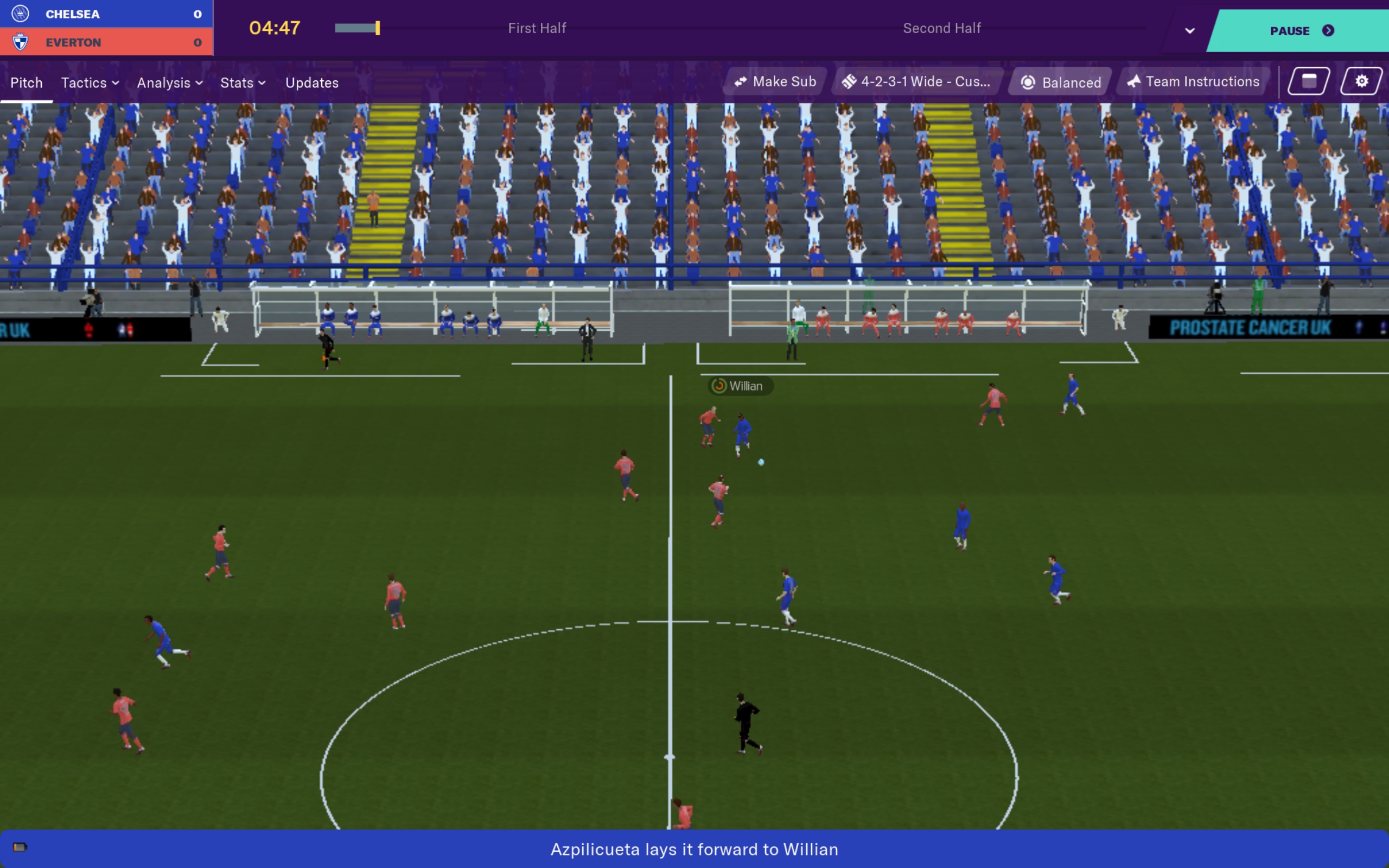 Minor matchday glitches aside, FM20 Touch is comfortably the best football management sim on the app stores. The game takes the winning, more accessible formula of last year’s instalment and adds enough new features to keep long-term fans happy. If you’re an avid football fan and a mobile gamer, this is a more essential purchase than To Madeira on Champ Man 01/02.