Football Manager 2020 Touch is a condensed version of its bigger brother on PC, but as always, developer Sports Interactive has succeeded in cramming a mindboggling amount of statistics, player data and tactical options onto iPad and Android tablets.

To call FM20 Touch ‘diluted’ is a bit like describing the Atlantic Ocean a diluted version of the Pacific. While some features from the home computer edition have been dropped like a misfiring summer signing, this is still the most in-depth simulation of the sport you’ll find outside of the core game. Newcomers to the series often have trouble finding their feet and even returning fans welcome a few steers when it comes to utilising the debuting features in a new instalment of Football Manager.

That’s exactly why we’ve put this guide together. Here, you’ll find some general tips to help you secure FM20 success as well as some specific pointers related to its new features.

Don’t let the shiny new boardroom graphics fool, this is still every inch Football Manager, so the things to consider when embarking on your maiden campaign are more or less the same as ever. Your first port of call should be the Team Report screen. Here, you will learn exactly where your squad’s strengths and weaknesses lie as well as what resources you’ll be working with

Having a clear idea of where you need to improve and how much budget you’ll have to do it will help you plot an effective recruitment strategy. Lacking creativity in midfield but don’t have the funds to bag a big-name playmaker? Better start thinking about loans and free transfers.

Before you press ahead with pre-season and charge into the transfer market, it’s also worth thinking about which responsibilities you’re planning to shoulder and which ones you’ll need to delegate. In FM20 Touch, it’s largely training and scouting assignments that you’ll need to consider at this stage, and whether you should take them on yourself depends on your level of experience.

With your initial training and scouting preferences set, it’s worth taking a glance at the new Development Centre. This is a hub which houses all stats and data for your youth squad and players out on loan. Perhaps a promising wonderkid who’s ready for first-team action could plug that gaping hole in your midfield? This is the kind of info the Dev Centre will flag up for you.

By now, you should be raring to go, so you’d better get a tentative starting XI in place on the Tactics screen. A formation like 4-2-3-1 is a good starting point as it can be effective in most leagues, so long as you don’t overlook the importance of player roles (more on this shortly). You’ll need to master several formations and can always tinker with this one down the line, but now is the time to start firming up your provisional starting line-up. If you’re a newcomer to the series, the Tactics tutorial is a must, and you can read on for more hints and tips…

In Football Manager 2020 Touch, simply throwing your top players into a pre-set formation and hoping for the best is a recipe for disaster. Player roles are the glue which holds each system together and overlooking them is the downfall of many FM first-timers.

The majority of players are comfortable taking on a variety of different roles but you’ll want to assign them the duty they’re mostly likely to thrive on. Let’s use French Champions Paris Saint Germain as an example. Playing Idrissa Gueye in an advanced playmaker role isn’t going to fulfil his potential because PSG don’t use him that way. He’s their rock in the middle of the park, so he’s more suited to a ball-winning midfielder role.

Make sure you haven’t got two players taking on the same role as they’re almost certain to clash, and don’t be afraid to experiment. You’ll never know whether your top striker is more effective as a poacher, advanced forward or target man if you don’t apply some fine tuning to find the perfect formula.

If in doubt, take a look at how the team you’re managing utilises their players in real life. After all, Football Manager is all about immersing yourself in the beautiful game.

Ahead of every game, your scouting team will carefully prepare a report on the opposition and all the information you need to exploit their weaknesses is there in that digital dossier. The importance of these reports cannot be overstated but don’t make the mistake of taking them too literally.

The data your scouts compile includes everything from the formations your opponents struggle against to which area of the pitch they tent to concede from. It’s always tempting to dismantle your current system in favour of the tactical Kryptonite your assistants suggest, but knee-jerk reactions are never encouraged in the world of Football Manager.

In terms of suggested formations, it’s all about what you can extrapolate from the fact your opponents are vulnerable to that system. For instance, if they’re always defeated by 5-3-2, that could simply mean they struggle when wingbacks are deployed - it certainly doesn’t mean you should abandon a setup that’s working for you in favour of one you don’t have the players for. If 4-2-3-1 DM Wide is listed as a weakness, it might be the case that adding width to your existing setup will stretch the opposition and throw off their gameplan. Often, it’s the small tweaks you can make based on this intel that make the biggest difference.

Similarly, don’t be afraid to go against your backroom team’s suggestions if they aren’t working on on the field of play. Just because the team you’re up against always concedes from the right wing doesn’t mean they haven’t identified that as a major issue and taken measures to combat ahead of their clash with your side. 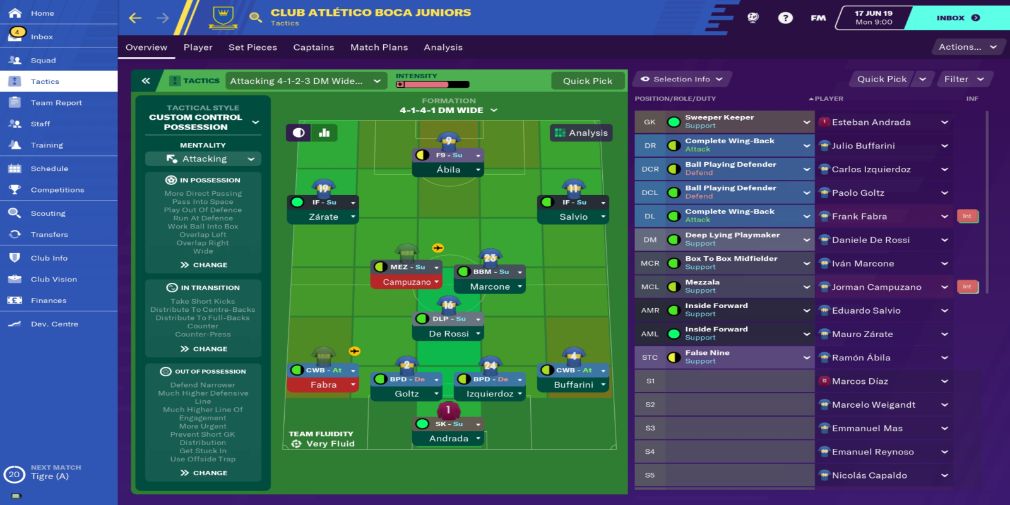 Although there’s no one-size-fits-all solution to tactics in Football Manager 2020 Touch, the Gegenpress system can be effective to the point of feeling overpowered… if you know how to get the most out of it, that is.

Championed by Liverpool boss Jurgen Klopp, this counter-pressing blitz involves winning the ball upfield and hitting back hard, bullying the opposition at every opportunity. It works with 4-1-4-1 DM Wide or 4-2-3-1 Wide, but can be tricky to pull off. You’ll have to build a team with stamina, pace, workrate and anticipation. Sub anyone can’t keep up with the tempo or axe them entirely.

You’ll need a pair of inside forwards on the flanks and a false nine up top, all set to support duty. Assign your midfield combo to deep-lying playmaker, mezzala and box-to-box midfielder roles, and have your wingbacks or full-backs set to attack. See the screenshot above for an overview of the recommended team instructions for this system.

Mastering Gegenpress will help you lay waste to the opposition but it’s advisable to have a plan B, because opponents that are proficient with long-ball tactics will occasionally catch you out. Knowing when to abandon this style of play is just as important as executing it correctly.

Still looking for more information on Football Manager 2020? Check out our hub page.
0/3
Next Up :
App Army Assemble: Railbound - "Should you go full steam ahead with this adorable puzzler?"