Bad North, Raw Fury's tactical rogue-lite, will be available for iOS and Android this October

Raw Fury's tactical roguelike Bad North is making it's way to mobile devices on October 15th. Previously available on Switch and other consoles you'll now be able to defend your island against waves of Viking invaders on your phone when it arrives for both iOS and Android.

Bad North is a particularly disarming game. It looks incredibly beautiful with it's painterly, serene visual aesthetic. You'd be forgiven for assuming it's a relaxing game where you just watch a colony grow. But, in reality, Bad North is a tricky customer and once your idyllic home is covered in the blood of friend and foe alike, it won't seem so charming anymore.

If you're unfamiliar with Bad North, it's a real-time tactical rogue-lite where you'll need to consider the shape of your island when repelling the Viking hordes. Death is also permanent so if you lose any of your commanding officers they're gone for good. Well, until the next run at least. 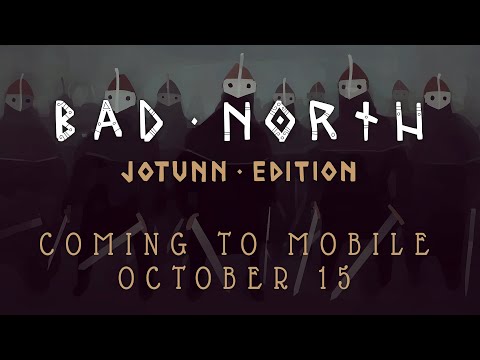 Those that survive can be upgraded to become even more formidable in future battles. Instead of controlling the minutia of battle, you're put in charge of the general strategy which you pass on to the higher-ranking commanders and they'll carry out your orders as best they can. Each island is also procedurally generated too so it should give the game a fair bit of replay value.

The mobile port will include the Jotunn Edition of the game. This means that not only will we get the full base game on release it will also include all of the Jotunn content that was added to console versions of the game as well.

Bad North will be available on the App Store and Google Play where you can pre-order now if you'd like. It will be a premium game that will cost $4.99 according to the App Store listing.