Noodlecake is a titan in the mobile realm, publishing games such as Death Road To Canada and Golf Blitz. Their latest venture is Sleeping Giant's Farm Punks, a game where you grow produce, fire it down an obstacle course with a cannon and earn more money for rolling it further. I've spent a few hours with it and have some thoughts which I must share.

The standout feature of Farm Punks is all in the aesthetics. It's a great looking game making use of bright colours to give it a cheery feel, supported by the chirpy soundtrack that plays when you're rolling downhill.

It's also got a wonderful sense of fun in its appearance and the fruit designs themselves are bursting with character. You start with various brands of apples you'll recognise such as Granny Smith who is presented as a doddery old apple with a cane and reading glasses or Golden Delicious who's primed to eat itself with a knife and fork.

But there are also a number of them that serve as references or just fun bits of wordplay. The rarest brand of apple is the Macintosh, an old looking computer with a stalk and leaf poking out the top. Then there's the blueberry variant called Bad Kid, which is an inflated blueberry with arms and a head poking out in reference to Violet Beauregarde of Willy Wonka & The Chocolate Factory fame.

Discovering all these different variants was my main reason for grinding through all the challenges to earn more resources to buy different trees. Whilst the game itself is good fun, rolling down the hills and hitting speed boosts gives a nice feeling of momentum but there's not much variation in the gameplay to keep me coming back for more. 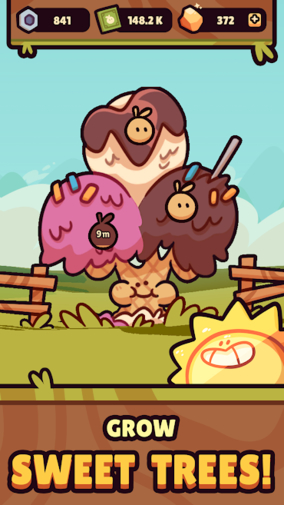 The main problem is that the different types of fruit just don't feel all that different. Sure, there's some slight variations like the avocado will have a two health bars, rolling as the stone of the fruit after losing it's initial HP or having a group of berries means their numbers decrease as the health depletes. But, at least early on, they all kind of feel the same. This is reflected in the challenges themselves. They don't vary much between the different types of fruit. It's always: travel x amount of distance or earn this many points through tricks.

That's not to say Farm Punks is bad by any means. It just lacks a little bit of variation that you'd hope you for after making enough cash to buy a new tree. Rolling down the various hills and taking in the different locales as you make it further down is great, it just needs a bit more diversity in how the fruit handle to keep me coming back. That may come later on, after all, there are 9 tiers of trees to unlock.

Rush Wars cheats, tips - How to level up and FAST