Sprout: Idle Garden review "A charming experience that won't take up much of your time"

There is a simple delight to watching something grow - and that delight is only increased when you have some control over the growth. Nurturing something from a patch of dirt to a sun-sucking carbon dioxide recycling machine is just pretty brilliant. And that's something Sprout: Idle Garden understands.

It doesn't quite manage to capture the relationship between person and plant, but it has some neat ideas when it comes to idle gaming that are going to make you dip in and out of its gorgeous-looking world time and time again.

No, it's not going to sway anyone who thinks, incorrectly, that idle games are a waste of time. But there's a good deal of fun to be had here, and a calming atmosphere that makes everything feel like it might be okay for a change.

The game begins with you and one gardener on a small island. It's up to you to build a much bigger island, putting in paths, plants, houses, and more to keep your gardeners happy and to earn as much money as you can. More money means a bigger island, and more plants.

Being an idle game there's not actually that much to do here. Play sessions last about ten minutes, but see you changing the entire shape of your little world. You'll unlock new kinds of path and ground, new kinds of houses, and monuments and other accoutrements that will further personalise your little corner of the universe.

Put the game down and your gardeners will happily potter about, collecting flowers and improving your coffers. You'll have to put the game down too - it's built around a series of challenges, and sometimes waiting is the only real option you have. 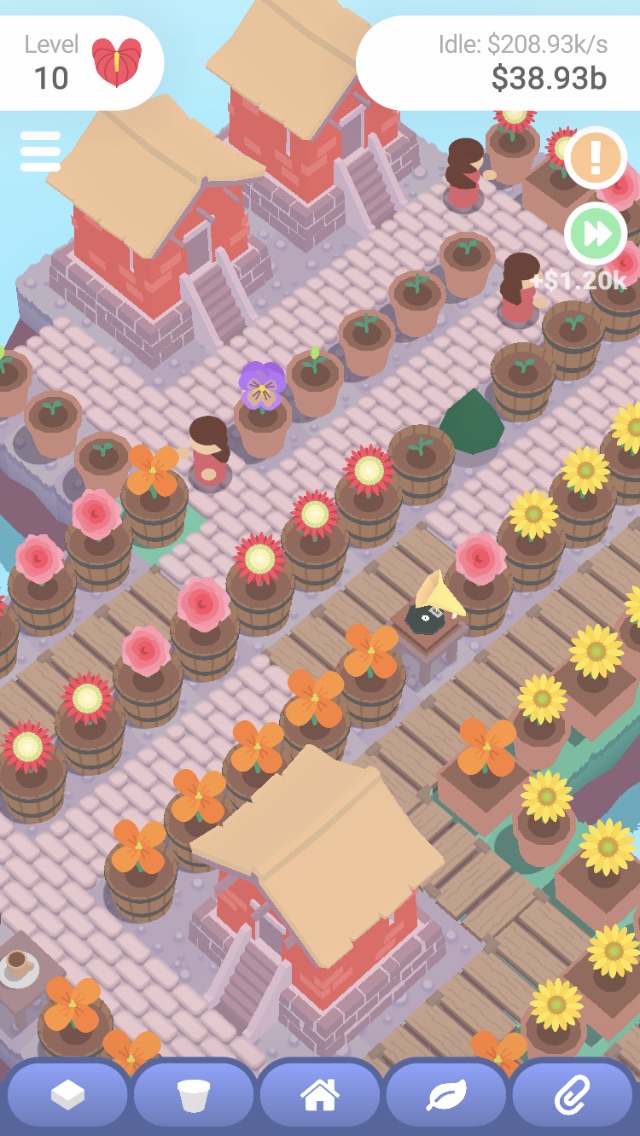 Not that that's a bad thing. If you overplay Sprout: Idle Garden, or any idle game for that matter, the cracks become way too obvious. This is an inherently repetitive experience, but it's not the mechanical complexity that keeps you coming back for more.

It's just nice to stick your head in from time to time to see how everything is going. While you're there you'll make some changes, add some new ground to your world, and pop some pots here and there ready for new seeds. Finish a challenge, like hitting a certain level or building a new piece of your world, and you'll get some cash.

There's a decent rhythm to the progression, and because you're creating your own personal space you're more inclined to keep checking back on it than if you were just leaving a party of adventurers to adventure without any input from you.

It's that creative drive that's going to push you to keep playing Sprout: Idle Garden well after you'd normally have got bored of an idle game. You want to keep playing because you're actually changing things, rather than them being changed for you.

That's not the biggest conceptual leap in the world, but it makes Sprout: Idle Garden a much more enticing proposition. Now, if you'll excuse me, I need to get and check how my flowers are doing - I've left them alone for way too long.