There was a time when almost every other game that came out on the App Store was a runner, but that's simply not the case anymore. Or at least it hasn't been for a while. It feels like the runner genre is trying to lay down some more roots, and one of the ways it's doing that is through games like Rolling Sky 2: Rolling Dream.

It might not have the most inspiring name in the world, but this is actually one of the best over-the-shoulder-leg-it games we've played in quite a while. And it's not just because it's really, really good looking.

Sure, that's part of it, but there's enough going on here beneath the gorgeous graphics and slick sound to ensure that you're going to be trying to make it through even the trickiest level in order to see what the game comes up with next.

Music to my ears

Every level here is different from the last in some subtle and not-so subtle ways. That's because each level is built around a piece of music. Each of those tunes, as you might expect from the title, represents a dream that you're running through - avoid the obstacles and get to the end.

You control the direction you're heading by sliding a finger left and right around the bottom of the screen. That's the extent of the say you have over what's happening, and while it might sound like it isn't enough, the game uses the mechanic in a really intelligent way.

For one thing, the levels rarely stay the same. One minute you might be soaring along on the back of an eagle, the next you'll be weaving your way through bounce pads and deadly blocks. There are even more surprises waiting for you, and they all hope you're not ready for them. 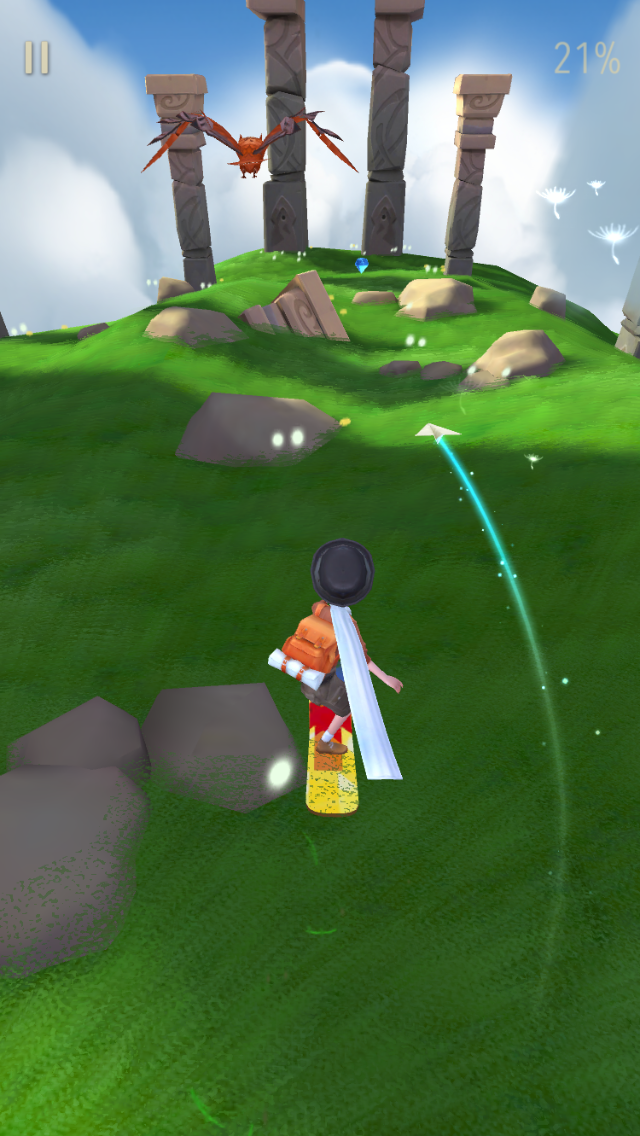 Then there are the levels themselves - they're so different from one another that sometimes it feels like you're playing multiple games. But the simplicity of the controls means you're never challenged too much - although you are going to plunge to your death on multiple occasions.

The variety can sometimes leave you frustrated, especially when a sneaky new mechanic creeps up on you, but for the most part it manages to keep things fresh and exciting. The extra visual interest - like coalescing platforms, a level set on the neck of a violin, and more - certainly doesn't go amiss either.

Rolling Sky 2: Rolling Dream needs you to keep moving forwards - that's the deal that it makes. Get stuck, which is quite likely on some of the later levels, and you're going to find yourself getting disgruntled. The simple mechanics are great, but when you need precision sometimes they can be a bit lacking.

That's not a major black mark, but it's definitely something worth considering. This is a really interesting and fantastically well put together auto-runner, for sure, but in the end it is just another auto-runner.

It's a gorgeous, enjoyable auto-runner for the most part, but while its small changes might be enough to drag in fans of the genre, anyone else might find it a bit on the shallow side.

Rolling Sky 2 does a lot of things right, and while its problems will annoy, it's still worth checking out
By Harry Slater
| Feb 28, 2019 |
iOS
Find out more about Rolling Sky 2: Rolling Dream