Animus - Harbinger doesn't mess around when it comes to letting you know that it's a game like Dark Souls. The first scene of the game sees you, a grumpy, taciturn, potentially undead knight, sitting at a fire in the middle of a gloomy wilderness.

What follows does little to alter that first perception. This is a game that wants to be Dark Souls for mobile. And, in a way, it sort of manages it. Not always with the considered, slashing poise of the original though.

After getting some told some stuff by a dead king, you wander off into the darkness to find things to kill. The game is split into little sections, so there's no vast world to explore here, which some might find a little annoying.

But it's one of a number of changes the game makes to the template to fit the core violence into a mobile package. Some of them work, some of them don't.

The fights here follow the same template. You're super underpowered, and so you need to keep away from the giant monsters you're trying to smash into gory lumps. 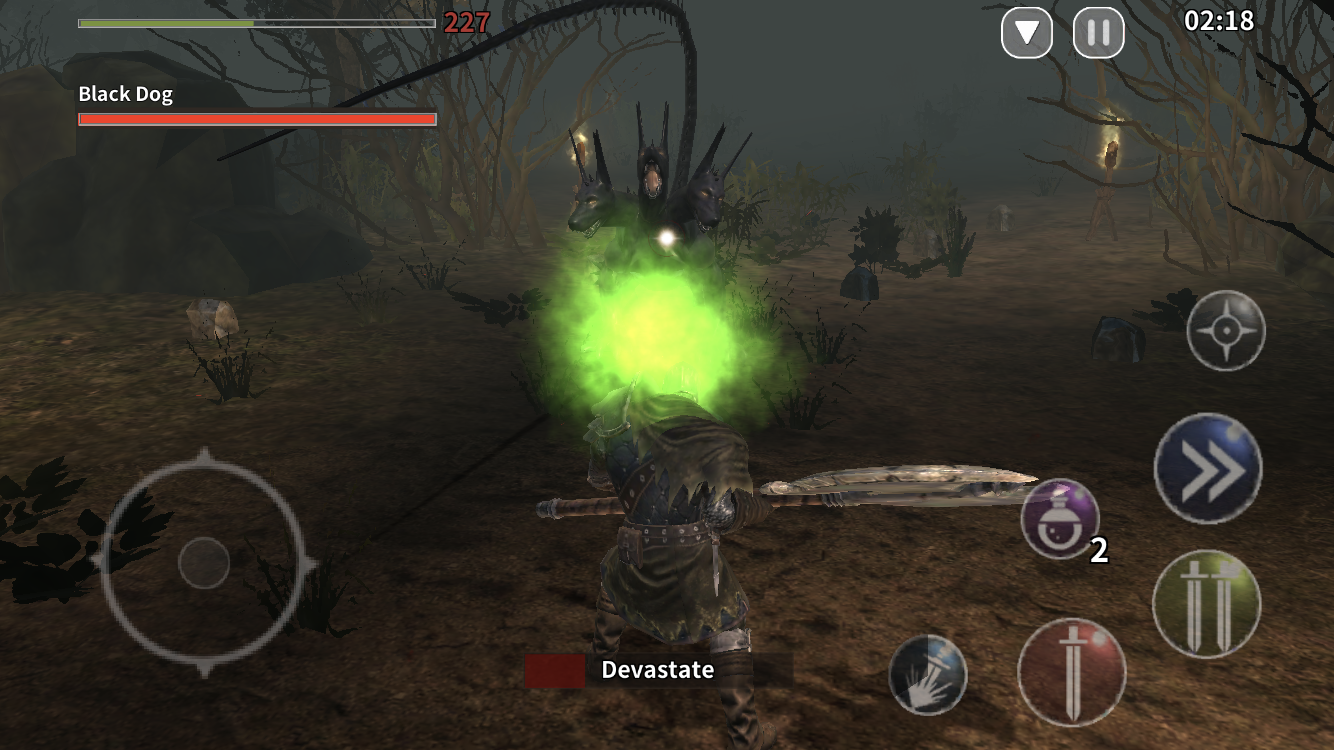 You've got an almost overwhelming amount of buttons to deal with. There are two attack strengths, a couple of special buttons, a dodge, and a potions button that lets you heal. Then you've got a floating stick to control movement, and can swipe the screen to look around.

The controls never feel like they're adequate enough to deal with the threats you're facing, but that's sort of the point. It's one of the ways the game amps up the difficulty artificially, and it works pretty well.

Sure, it's frustrating trying to get your fingers and thumbs to go to the right places, but that makes your victories all the more thrilling. It also means you'll die a lot, which is going to be a tick in the Dark Souls plus column for some.

Animus - Harbinger sets out with one goal in mind, and for the most part it does a good job of getting there. The frustrating controls won't be to everyone's liking, and if you don't like brooding dark fantasy, the aesthetic here will set your teeth on edge.

It doesn't have the wounded charm of a true Souls game, and the fights do tend to get a little repetitive once you've figured out an enemy's attack pattern, but there's still - I hesitate to say fun, so let's go for face-smashing anguish - to be had here.

It's difficult in different ways to its inspiration, but if you're looking for a challenge, Animus - Harbinger certainly offers one
By Harry Slater
| Oct 2, 2018 |
iOS
Find out more about Animus - Harbinger
SEE COMMENTS

Animus - Harbinger video review "All aboard the Dark Souls train"