Subscribe to Pocket Gamer on
There are a few games on the App Store that make you sit up and take notice from the second you load them up. The likes of The Banner Saga, Gorogoa, and Infinity Blade all, for different reasons are what might have once been called eye candy.

And now you can add Oddmar to that list. It is, quite frankly, a stunning game to look at. From the cut scenes to the animations, from the backdrops to the towering bosses, every part of it has been preened and polished and perfected.

And the game underneath all of that shiny loveliness isn't too shabby either.

Viking up the prices

The game is all about a viking who's out on a quest. His village has basically told him he's rubbish, so he's off to prove himself, with the help of some special powers he's been granted by a tree spirit. Obviously.

Essentially the game is an action platformer. You push a finger along the left of the screen to run, and swipe up on the right to jump. You've got other moves you can pull off as well. Tap the right and you'll attack. Swipe down when you're in midair and you'll perform a shield bash. 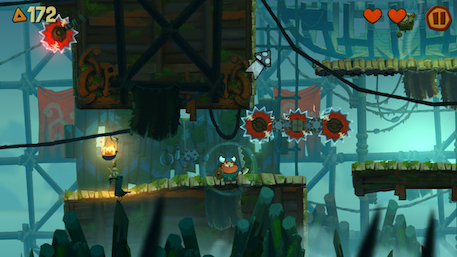 Throughout the game you'll find little shops that let you purchase new weapons and shields. These add slightly more depth to the experience, and give you a reason to find all the coins that are scattered through the levels.

And those levels are expertly designed. Sure, there's not that many surprises if you're a veteran of the genre, but there's enough thought put into them that you don't feel like you're retreading old ground either. 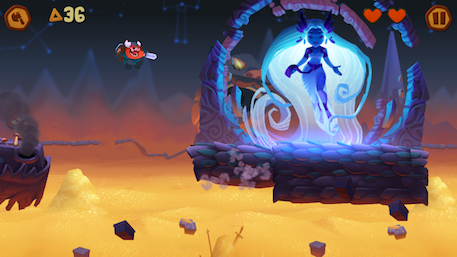 There are spikes, wall jumps, secrets, spinning things, moving platforms, and everything else we've come to expect from this sort of game. And then there are some truly impressive moments, like when you're being chased by a troll and need to time your jumps perfectly as the tree you're stood on falls over.

And it's these special set pieces that keep you pushing on. You're riding a boar. You're traversing a dream world on the back of a lumbering dragon. And you're doing it all with a big grin on your face.

So no, Oddmar isn't the most original game in the world. But taken as a package, as the collection of images, mechanics, and ideas you're going to be wrestling with once you've installed the app on your phone, it's still something pretty special.

If you love platformers, then this is a no-brainer. If you're not a hundred percent sold on the genre though, there's a chance that Oddmar might be the game that makes you finally understand how exciting an experience they can be.

Oddmar looks absolutely stunning, and while the game underneath it all feels familiar, there's enough great ideas here to shine through
By Harry Slater
| Apr 19, 2018 |
iOS
Find out more about Oddmar