Florence review - "A moving, if a little brief, tale of love, loss, and life"

By Harry Slater
| Feb 14, 2018
iOS
|
Florence
Get Florence on...
Find out more about Florence
Available on: iOS + Android

Florence is less of a game and more of an experience. Mechanically speaking, there's not much to do here, and you're going to finish the story it offers up in about half an hour.

If I were to review it as a straight-up video game, I'd bemoan the lack of replayability, the paucity of content, and the fact that you don't really do anything for the entire time you're playing.

But Florence isn't a straight-up video game, not by a long shot. It's an emotive tale of love, loss, and finding yourself. And it's really rather good.

Florence is the story of the titular character. She's 25, and sort of wandering through life in the way a lot of us seem to do nowadays.

Things start to change when she meets someone, and the rest of the game tells the story of their relationship. I won't spoilt anything here though, because the story is the be-all and end-all here.

Your interaction with the game is minimal. You need to tap and swipe a few things, put together jigsaw pieces in order to have conversations, and move objects around. It's delightfully simple, and lets the narrative progress easily. 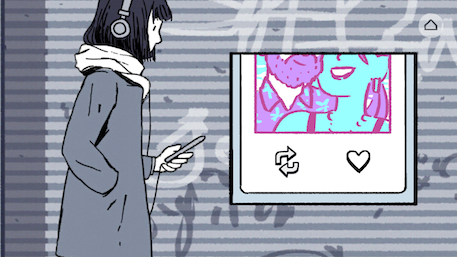 There soundtrack here is of particular note. It mixes cello and piano into a series of lovely themes, that intertwine and mingle with one another as the action unfolds in front of you. One particular sequence, involving tapping musical notes, is a highlight.

The art is gorgeous as well. It's clear that Florence is a labour of love. There's so much heart here, and so much empathy, that it's impossible not to get swept up in the drama that's occurring.

There's a power to Florence that comes from the perfect balancing of all of its parts. Sure, you might not be left mulling things over once you reach the end, but there's an indefatigable sweetness here that never edges into the saccharine.

If you're looking for a game that's entirely self contained, won't take up more than an hour of your time, and will likely leave you with a warm and fuzzy feeling in your chest, then Florence is going to be right up your street.

And three quid for an experience that does all of that isn't really too steep of an asking price, really. I mean, how long does a cup of coffee last you? And does it have a cello in it?

It might not last long, but Florence is an intriguing experience that's well worth checking out
By Harry Slater
| Feb 14, 2018 |
iOS
Find out more about Florence
SEE COMMENTS