Vempire is a strange one. It's a deck-building card game that seems to throw most of the received wisdom about the genre out of the window. On the one hand, it's nice to play something that feels fresh.

On the other hand though, there's a lack of familiarity here that means you're going to be stumbling around in the dark a little while you get to grips with things.

Clumsy translation certainly doesn't help matters. But, once you start to understand what's going on, you're going to find yourself having a pretty lovely time.

Fangs for the tips

The game mixes together vampirism and European history into a strange melting pot of fangs, slaughter, and kings and queens who actually reigned on the continent a few hundred years ago.

That's mainly window dressing though. The real kick here is in the gameplay, and that's a bit harder to explain than 'oh yeah, the pope was a vampire back then.'

You select a monarch at the start of the game, and your aim is to mash your opponent's face into the ground. You do that by knocking their empire points down to zero. Which sounds pretty easy. It's not though. 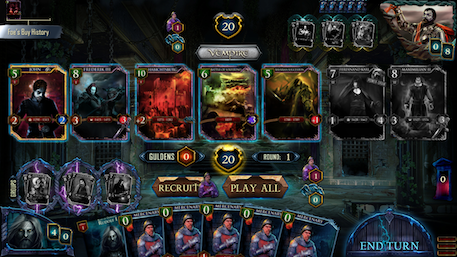 The cards here all have a variety of different functions. You can attack with some of them, sell them, stick them in your Empire deck to boost your health, or bank them for use later. Some cards have effects, other cards don't have effects.

It's going to take you a good long while to actually understand all of the things you can do each turn. Expect your first few rounds, even on easy difficulty, to end in ignominious defeat.

But then you start to get the hang of things. You realise spending all of your minions to get you more gold is actually clogging up your deck. You start to understand that a lot of the important things that happen in the game are actually happening in the middle, between the two players.

When things start to click, you're going to find a deep, sometimes confusing, often frustrating card game here. No, it doesn't play by anyone else's rules, and it's both a blessing and a curse.

If you stick with Vempire you're probably going to fall in love with it. If you don't, well to be quite frank, no one could blame you.

VEmpire - The Kings of Darkness