2017 has seen a good deal of famous indie games finally making their way to mobile. We've had The Witness, we've had The Talos Principle, and now it's the turn of Fez to make a surprise entry onto the scene.

If you've not heard of it, it's a clever puzzling platformer that sees you messing around with the dimensions of the levels to reach your goal. It's pretty darn good as well, and was warmly received on all the big ol' consoles it ended up on.

But does it work on mobile? Well that's the question we're here to answer. But, in brief, yeah it's actually pretty good on touchscreen.

You play as Gomez, a little 2D sprite man who discovers that the world he thought was flat is actually three dimensional. After jumping up a few platforms, you're given the power that's key to the rest of the game.

Swiping left or right on the screen spins the level in that direction. There are four different planes, and they offer up different platforms and obstacles for you to interact with.

The main aim here is collecting cubes. These cubes open doors that allow you to progress through into different sections of the world. You'll need them all if you want to get to the end of the game. 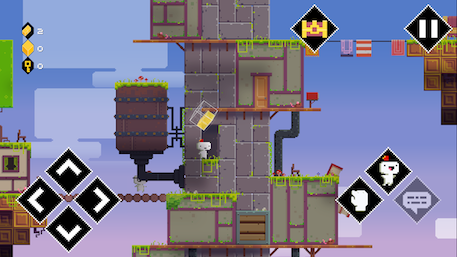 Fez is every bit as lovely on mobile as it was on the other platforms it found itself on. There's a warmth to proceedings, and an inherent intelligence, that make leaping around its towering levels a lot of fun.

The controls are pretty slick too. While Fez isn't a super hardcore platformer, it does demand some level of precision, and the scheme here offers more than enough of that that you're never going to be screaming at it in frustration.

There are a few niggles here and there, including some buttons that didn't seem to show up on the screen of my iPhone 7, but none of the problems here are game-breakers.

Is mobile the best place to play Fez? No, probably not. But then you're going to be paying half the price you would be to pick it up on Steam.

And saving five bucks definitely makes this a more interesting proposition. Fez Pocket Edition works really well, and if you've never played the game before, this is a decent place to start your plane-hopping adventure.

A good port of a great game. It's not perfect, but it still captures most of the magic of the original
By Harry Slater
| Dec 14, 2017 |
iOS
Find out more about Fez
SEE COMMENTS

VS. Super Mario Bros is headed to the Switch on December 22nd

The perspective-shifting Fez is finally headed to iOS this year