After you've become accustomed to its perspective-changing tricks, it's easy to forget that the opening sequence of Fez, in which the game reveals that it works primarily in 3D and not 2D, is kind of astonishing.

It's a title that initially tricks you into thinking it's going to be one type of game - a cutesy retro platformer - but actually turns out to be something quite different. Fez utilises this ability to lull you into a false sense of security often, sometimes tricking and confusing you deliberately.

But it's a welcome deception, for the most part, and this Vita version is an excellent way to experience it. 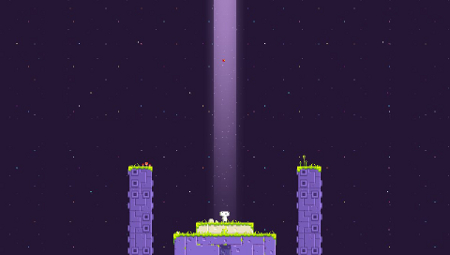 The star of the show is Gomez

You control Gomez, a small, all-white little chap, save for the black dots for his mouth and eyes, and a red fez on his head. The game is presented in 2D pixel-art, until you're given the ability to spin the world around at 90 degree angles with a tap of a shoulder button, at which point you realise that the engine running it is more akin to a Minecraft's than Spelunky's.

In addition to your world-turning powers, you can also run, jump, clamber, and interact with a small selection of objects in the world. Gigantic stone skulls are there to be rotated, large crates are there to be pushed onto pressure pads, and magical warp doors let you zip about the realm.

Your quest is to find Cubes and Cube Bits, until you have enough of them to progress through each of the sealed doors that lie in wait, all the while exploring the world and unravelling the secrets bound within this mysterious third dimension. You'll die a fair bit, but death is rarely punished harshly in Fez: for instance, falling into a bottomless pit will result in you restarting on the last ledge you were on.

Discovery is a big theme. You're constantly figuring out how to traverse the world, rotating it to bring faraway platforms closer, for example, and spotting hidden chests that reward you with treasure maps to find all the goodies in an area.

The game is stuffed with collectables and secrets, and is consequently reminiscent of golden-era Nintendo game like Super Metroid. It's easy to be swept up in a child-like obsession with uncovering every last artefact, decoding every clue, and grabbing every Anti-Cube. 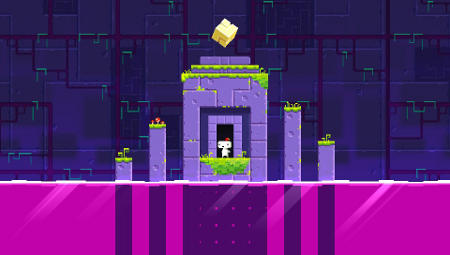 Perhaps most impressive is that Fez's world feels complete, even when it's being torn apart by Black Holes.

Each area is filled with detail, some incidental, some crucial to progress - citizens go about their business in your village, birds perch upon signs, lightning illuminates the sky. Even the homesteads you visit look like they're being lived in by their inhabitants, rather the generic re-used interiors they could easily have been.

But regardless of how cohesive the look of the game is, the layout of the individual stages is very confusing. For example, you might walk through a doorway and then be teleported to a distant, unconnected island from the one you were standing on.

The ability to peek through and see what's on the other side of each door helps alleviate this issue, as does the map, but to truly understand the layout of the world you'll need to actively commit it to memory, and that's an issue when you're playing it in small chunks on a handheld.

The shift from PC and home console to portable is otherwise smooth: this is a quality port. You always feel in control of Gomez's movement, load times are minimal, and the vibrant palette shimmers.

Exploring an immaculately crafted world is what Fez is really all about, and this handheld version maintains the pleasure of doing that. It requires a great deal of dedication from anyone who accepts its challenge, but those who do will discover wonders upon wonders.

A deep and involving Metroidvania in a superbly constructed world. Fez's appearance on handheld is just as intriguing as when it first hit consoles and computers
Next Up :
Hero Emblems II review - "Lovely visuals and music, but match-3 combat lacks strategic depth"

The perspective-shifting Fez is finally headed to iOS this year