The Muscle Hustle is an interesting mix of ideas that takes the structure of a simple wrestling game and then throws a whole bunch of mobile concepts literally and figuratively into the ring.

It's not without its problems, and there's some grind here if you want to make the most out of the experience without paying, but there's a good chunk of fun as well.

Ringing in the changes

The core of the gameplay revolves around twanging your team of pugilists around the ring. You enter each fight with a group of three fighters, and they're represented by discs.

The fights are turn-based, and when it's your go you drag anywhere on the screen to fire off a battler, slingshot-style.

You're aiming to hit the other wrestlers to deal out some damage, but there are a few twists here that mean the fights are more interesting than that. 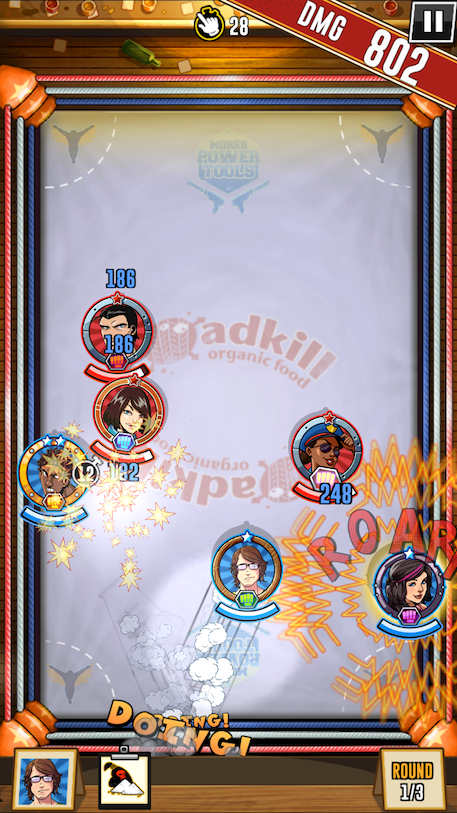 Each member of your team has their own special move that they unleash when they're hit by another member of the team. Some of them toss weapons at your foes, others scream out buffs.

There are positional moves too. Get some fighters into the corners of the ring and they'll hop up on the top rope and leap at the closest enemy, dealing out a big chunk of extra damage.

The game has some light RPG elements too. You're upgrading your wrestlers as you fight, and toughening them up with gears. Stronger wrestlers have other moves that they can use after a set number of turns.

The Muscle Hustle takes ideas from plenty of sources, from marbles, Angry Birds, and plenty of other famous mobile games too. And the jamming together job it does with them is pretty damn good.

Sure it gets a bit samey after a while, and there's a lot of effort to put in if you want to unlock everything the game has to offer, but while the game is fresh you're going to be having a lovely old time.