Angry Birds Match does pretty much everything you'd expect it to do. It's a highly polished match-stuff puzzler that's full of faces and ideas that you're going to be familiar with from the main AB games.

And if that's your cup of tea then there's absolutely nothing wrong with it. It's well put together, and it fizzes along at the sort of speed we've come to expect from games like this.

If you prefer your games with a little more meat on their chicken bones, then this one definitely isn't for you. And it was never supposed to be.

The game is all about matching items in groups of three. Do that and they'll disappear, making space in the level for some more cakes and what not to tumble down from the top.

Match certain numbers and shapes and you'll get yourself a bird. These can be twanged off to smash up blocks in different directions. It's a neat idea, and a little different from the normal way special moves are handled.

What's decidedly normal is the level design. There's mud to clear, jelly to smash, and certain numbers of things to burst. You've got a move limit, and if you haven't completed your goals by the time you've used them then you need to spend some gems or start again. 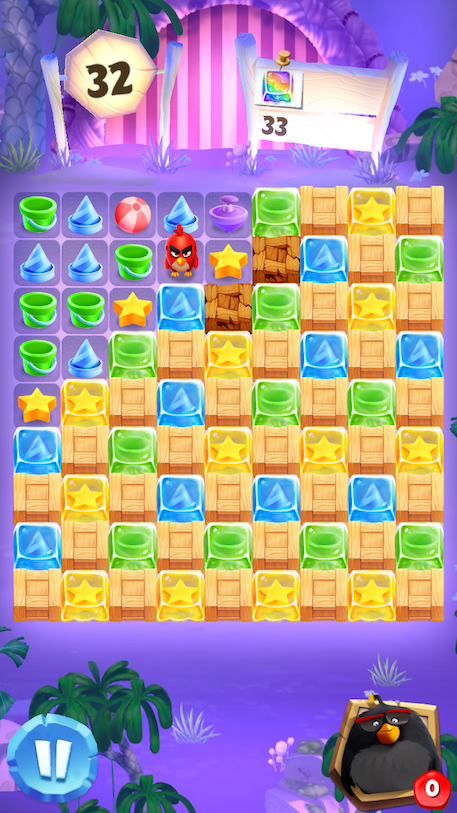 There are a couple of twists here and there, and the levels are certainly well designed. It's just that there's a sense of familiarity to everything you're doing. The names and the graphics might be different, but this is very much a game that's comfortable in its genre.

That's not a bad thing, per se. After all this is a game built to appeal to a specific demographic, and if you're not part of that then you're not really going to care what it does.

But there's bite here all the same. And the compulsion loop is nice and tight. For the first hour you get unlimited lives, but after that you get a pot of five. You'll lose one of those every time you fail a level.

Angry Birds Match might not show much in the way of originality, but it's very, very good at what it does. It's just that what it does isn't going to be all that interesting to most of the people reading this site.

There's fun to be had, and if you're not averse to the odd bit of free to play stuff-matching then it's definitely worth a look.

How Spider Solitaire reinvents the traditional card game for mobile