I don't really understand baseball. It is a complicated game of rounders with too many rules that seems to last for about 14 hours longer than it really has any need to.

But that's fine, because some people might say the same thing about board games, which I love. Well, not the bit about rounders, that wouldn't make sense.

Now imagine what would happen if you mashed board games and baseball together. A 28 hour game that makes little to no sense and maybe only four people in the whole world understand? Well, actually, no.

Bottom of the 9th is essentially a game of dice. You're either playing the batter or the pitcher, and you need to second guess the other, with random dice rolls thrown in to keep things spicy.

If the batter gets one of these directions right, each team gets to tweak their actions. If either side gets both directions without the other matching them, they get carte blanche to use a whole bunch of skills. 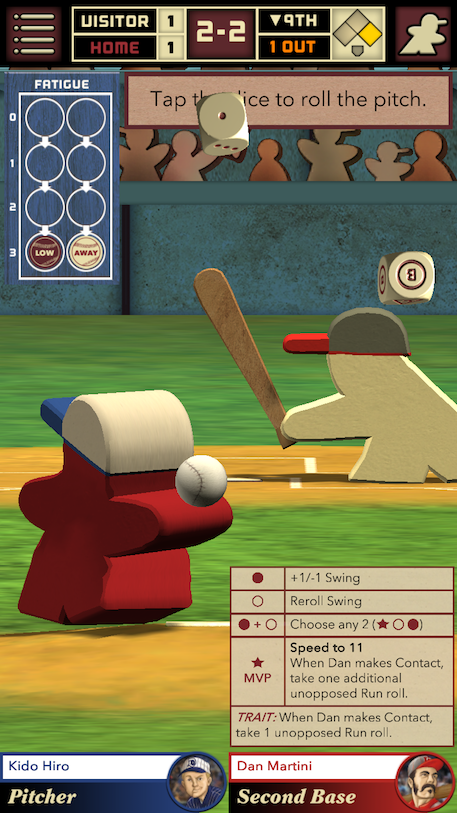 But somehow this combination gels together to create something incredibly entertaining. Each small section of play is tight and sharp, and since you can see what your opponent is doing, there's strategy to everything.

There's a lot of game here as well, from single player to pass-and-play and online multiplayer. And there's a slick thrill to everything.

Either way there's a good deal of fun to suck out of Bottom of the 9th. Don't write it off if you don't fit into both, or either of the camps, it's designed for. Just go with it, and you might be pleasantly surprised.

Bottom of the 9th

A brilliant and entertaining board game that's going to appeal to a broad range of people
By Harry Slater
| Aug 30, 2017 |
iOS
Find out more about Bottom of the 9th
SEE COMMENTS