Test your reflexes in Brainful, the fast-paced puzzler, coming to iOS and Android tomorrow

Though it might not be for everyone, the brain-training puzzler Brainful is launching tomorrow on iOS and Android and it certainly looks intense.

I'll await the collective eye-roll at the mention of 'brain training' but bear with me here. Brainful is a fast-paced, reaction-based game which trains and tests your reflexes and memory.

With three columns on the screen the goal is simple: get as high a score as you can. As you'll see from the trailer, the buttons on each column represent your next move so you've got to really pay attention. For example if you've got to click on the yellow square in the pink column, your next button will be in the yellow column, and so on.

This gets slightly more challenging, however, when numbers and symbols are added into the mix. From dice faces, to letters, to action symbols, it's not overly complicated, but when played at speed it looks like it'll be pretty crazy.

Keep an eye out for Brainful on the App Store and Google Play tomorrow, July 20th, free to play. 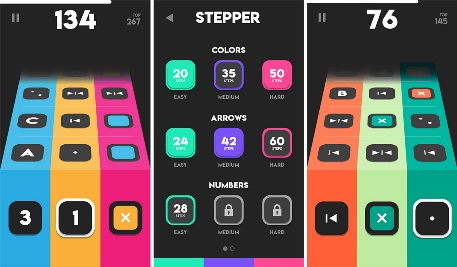