It's rare that a puzzler comes along with a new idea, but Color Magnet has managed just that. Yes, it's just another match-things puzzler, but at its heart is a clever concept about moving hues.

Rather than just chucking objects together to get rid of them, here you can change the grid with some well-placed shots. And that opens up whole new avenues of play.

On top of that there are a whole bunch of modes and levels to sink your teeth into. It's not perfect, but it's definitely an awful lot of fun.

The game sees you firing coloured blocks into a grid with a tap. So far, so standard. The big change here is that those blocks can connect with others they're not actually touching.

Fire a red against a green and, if there's another red behind it, the magnetisation of the blocks will join them together. So you can make huge combinations if you're smart enough. 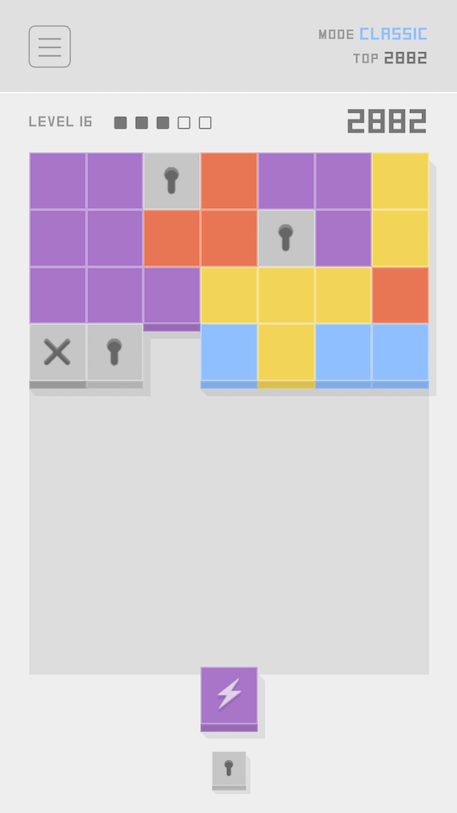 There are other blocks to take into consideration too. Locked blocks and cross blocks need to be fired when they come to the top of your stack, but they can't be matched through.

This leaves you with some tricky situations where you know the next block will let you chain together a great score, but you need to think of somewhere to put the greyed out puzzle piece first.

Throw in a two different modes and a series of super-challenging puzzles and you've got yourself a puzzle game that doesn't even think about doing things by half.

It might not have the slick, engaging polish of something like Threes, and it doesn't quite have the chops to lodge itself into your brain like the very best puzzlers, but that shouldn't detract from just how good Color Magnet is.

It's bright, it's super-smart, and it's probably one of the best new puzzle games that we've seen on mobile this year. And that's high praise indeed.

A clever twist on the match-stuff puzzler that actually sees its ideas through
By Harry Slater
| Jul 6, 2017 |
iOS
Find out more about Color Magnet
SEE COMMENTS

Armored Kitten blasts its way onto iOS and Android