Spot It! Duel review - An interesting match-stuff board game

Spot It! Duel is an interesting change of pace for digital board games. It plays like a free to play match-stuff puzzler. Mainly because it essentially is one.

It's got some other ideas mixed in there too, from Clash Royale and a few other more casual games. And it all comes together to create something interesting.

Interesting is good, but fun is better. Which is lucky, because Spot It! Duel is an awful lot of slightly guilty entertainment.

The game sees you controlling a Dobble. These weird little creatures seem to love matching things, so that's what you need to do.

The meat of the experience comes from the Arena mode. Here you're playing against other players. You've got a disc covered in symbols and so does your opponent. There's another disc where you're both matching.

You've got a short time to make some matches, and so does the other player. The bigger the matches you pull off, the more points you'll get. At the end of the round the player with the most points is the winner. 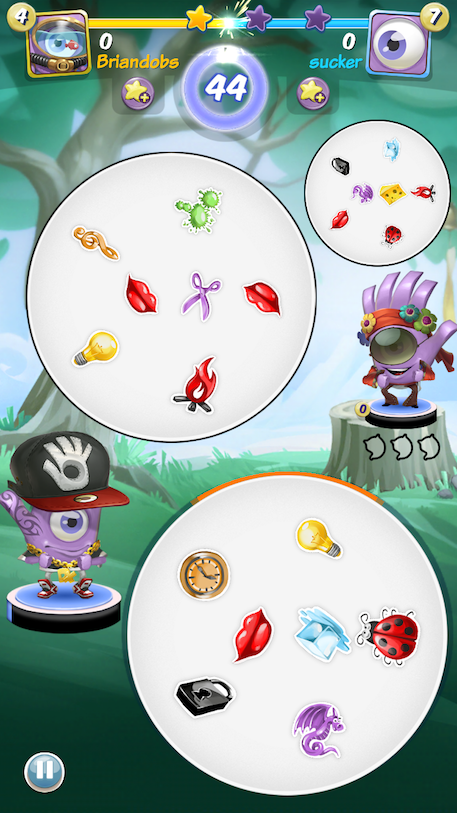 Each Dobble has its own special power. Some cam freeze an opponent giving you free reign over the board. Others can swap the matches on the shared disc around. There are plenty of the creatures to unlock, and you can upgrade them as well.

Alongside the Arena you've got Challenge mode. This uses the classic rules of Spot It, or variations there-on. So you're matching symbols on discs to try and get a set score in a certain time.

It's unlikely you'll spend much time in Challenge mode. There's just something wonderfully frantic about playing with other people, and the Arena offers a much sterner test of your skills.

Did you spot it?

There's a lot to like here. From the compulsion to keep playing to upgrade your characters and boosts, to the way different arenas offer different sets of symbols to try and match.

It's not going to be to everyone's tastes, especially if you're looking for a board game adaptation with some teeth.

But if you ignore the fact it's based on a physical product and just embrace the fast-paced and highly polished multiplayer matching, you're going to find yourself having a ball.

Want more? Check out our growing collection of Spot It! Duel articles!

An interesting and sometimes great board game adaptation with a twist
By Harry Slater
| Jun 28, 2017 |
iOS + Android
Find out more about Spot It! Duel

Master the breach and clear for 99p/99c in Door Kickers

TENS!, a Sudoku-like dice dropping game, has soft launched on iOS in the Philippines

Spot It! Duel has been updated again for iOS and Android

Spot It! Duel has been updated with some neat new features for iOS and Android

Spot It! Duel has added a brand new character to its roster on iOS and Android