Jaipur might be a game about trading in ancient India, but you really shouldn't let that put you off. This isn't a game about moving chits around a board, slowly building up your trading empire one painstaking step at a time.

It's actually a pretty fast-paced card game that sees you dealing in expensive wares, camels, and quick thinking.

All in all it's a lot of fun, and while it might not have the depth of strategy some gamers are looking for, there's enough here to keep most people happy for a good long while.

You're playing the role of a trader here, and the aim of the game is to end with more points than your opponent. To do that you need to sell the items you collect.

Everything is represented by cards. In the middle there's a market with five cards, and you've got a hand as well. You need to collect bundles of goods and sell them on, trying to make as much profit as possible. 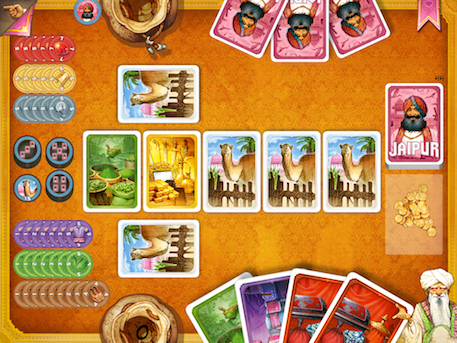 The money you earn from the things you sell is represented by counters on the left of the screen. Depending on what version of the game you're playing these might remain at a constant price or diminish the more disappear.

You've also got a herd of camels. You can trade these for cards, but the player with the most camels at the end of a round also gets some bonus points. Pick up one camel from the market and you have to pick up them all.

There are six different types of goods, ranging from leather to diamonds. You can sell one card of the cheapest three items, but you'll need at least two of the most expensive three to move them on.

It's a simple set of rules once you get to grips with it, but it gives huge scope for play. Do you grab all those camels and hope that the cards flipped over from the main deck don't give your opponent an advantage? Do you throw down those three silvers to get the points or wait for a fourth to get even more? 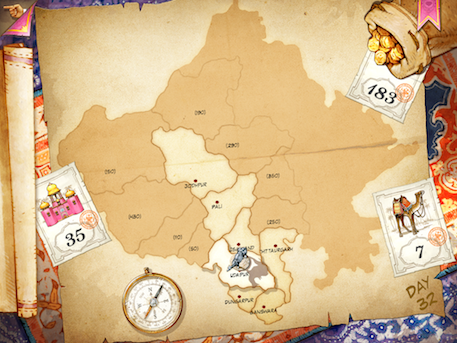 The game rushes by at quite a pace as well. There's a campaign mode that adds modifiers, as well as more traditional multiplayer options. And it all meshes together really well.

The UI is slick and intuitive, and you want to push on to test your burgeoning skills against real-life and AI players alike.

Jaipur doesn't have the far-reaching depth of other board game adaptations, but as a mobile game it works really, really well. You can bash through a game in about 20 minutes, and that's pretty good for gaming on the go.

Don't let the subject matter put you off. This is a fast and engaging card game that's well worth a play.

Jaipur: A Card Game of Duels

A fast-paced card game that's far more interesting than its source material might suggest
By Harry Slater
| May 25, 2017 |
iOS
Find out more about Jaipur: A Card Game of Duels
SEE COMMENTS