Snipperclips review - Is this the real star of the Switch launch roster?

Here's a question for you: what's the Nintendo Switch console's defining launch game?

There are two obvious candidates right off the bat. Zelda's obviously the best game on the console (some would say on any console), so has to be in there. 1-2 Switch is clearly the kind of system-establishing tutorial software that Nintendo specialises in.

After a long weekend with Nintendo's charming casual puzzler Snipperclips, though, I think we have a third credible candidate.

A snip at half the price

Snipperclips is a Switch exclusive, unlike Zelda. What's more, it's both consistently entertaining and reasonably priced, unlike 1-2 Switch.

Beyond that, Snipperclips is a cheerleader for the Switch's unique, social, accessible, 'local multiplayer anywhere' schtick. Most of all, though, it's just brilliant fun.

It's core concept - asking two to four players to solve cooperative spatial puzzles using a brilliantly fresh shape-editing mechanic - is one of those that you won't believe hasn't been done before. 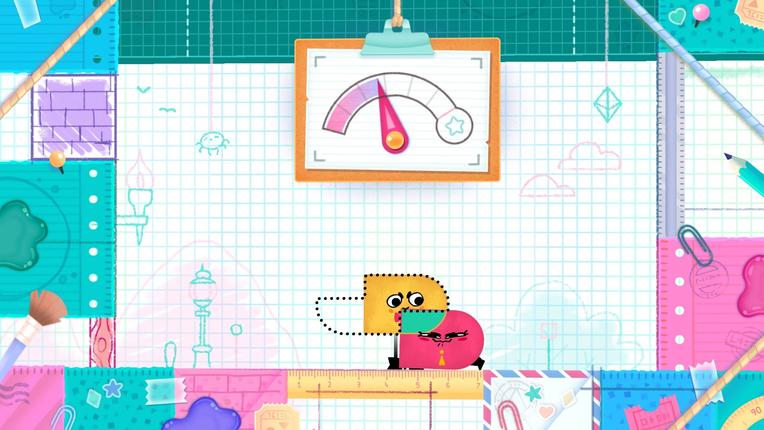 Cut to the quick

Each player controls a bullet-shaped character that can move and jump much like a 2D platformer star. Alongside the ability to rotate their bodies using the individual Joy-Con's shoulder buttons, the key move here is cutting.

Overlap your fellow player, and a press of the right-hand button will cut a shaped according to your own outline. It's a simple but brilliantly flexible system that enables you to sculpt makeshift prodders, platforms, scoops, cogs and more in just a few snips.

The levels work brilliantly to exploit these varied scenarios. I won't spoil any of the surprises on offer here, but within an hour or so of play you'll go fishing, pass delicate eggs across precarious rotating platforms, shoot hoops, and feed a giant pencil into a sharpener. 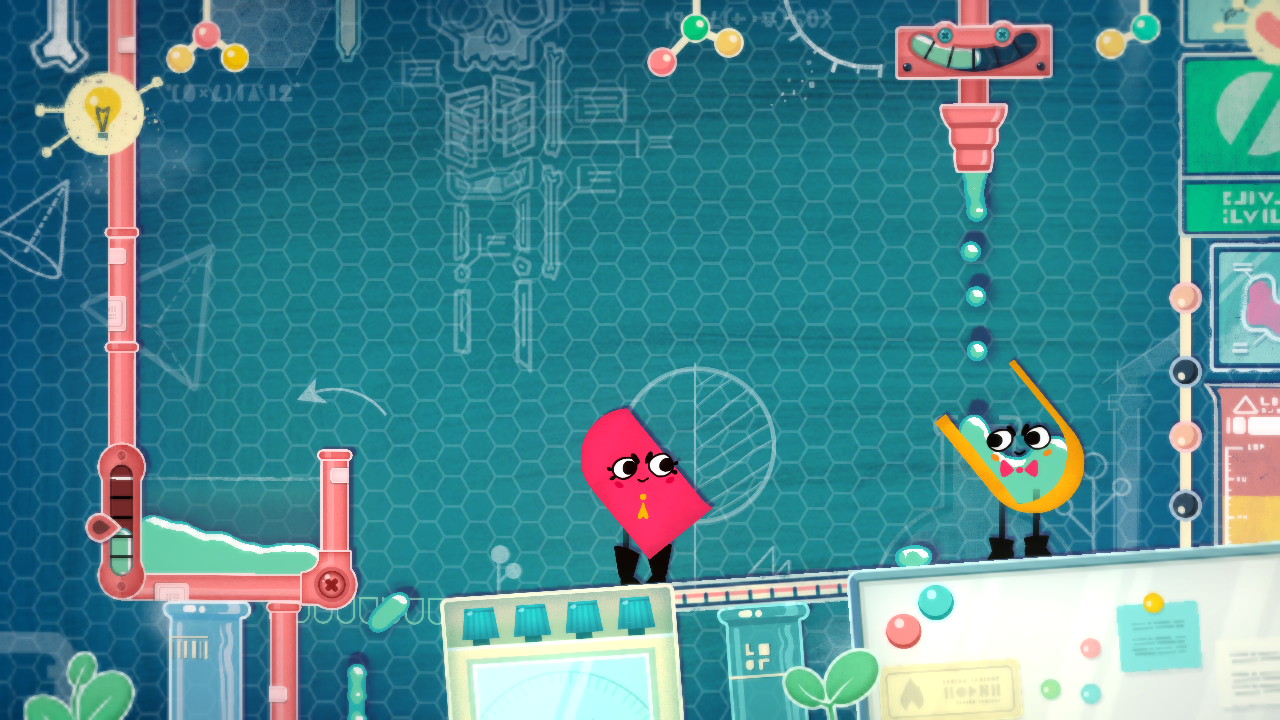 The true genius of these levels is that Nintendo has restrained its natural instinct to hold your hand. Contrary to the cute and friendly graphics, there are no instructions or pointers hinting at each level's solution. You have to figure it all out for yourself.

Or rather, yourselves. The act of working together and coordinating your characters' actions requires good communication and patience, as well as a healthy dollop of creative thinking.

One of the first problems I encountered had me and my playing partner completely stumped, yet the clues were never doled out. We weren't even offered a hint.

Of course, prolonged play will show you that Nintendo has inserted plenty of subtle pointers - it's just that they're woven into the fabric of the levels. Once you've deciphered the game's visual language, you'll quickly grasp what each level wants of you. Crucially, though, you'll always feel smart for figuring things out. 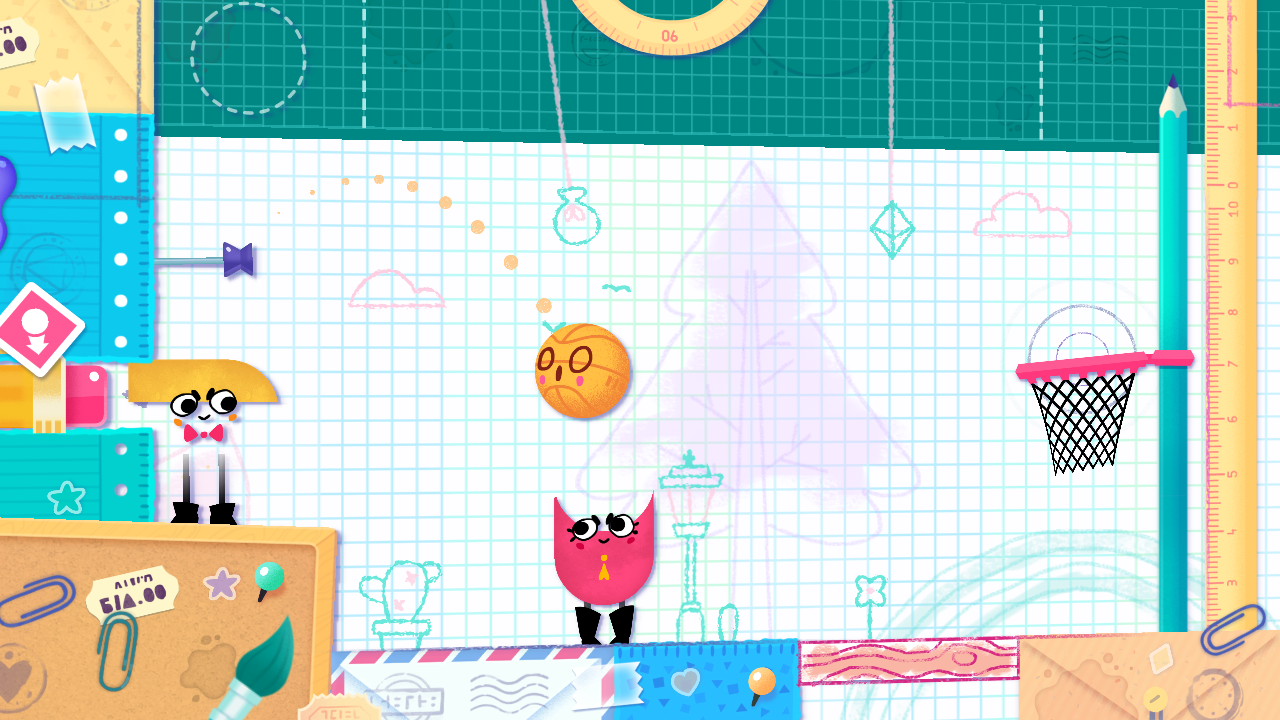 There are a few faults here. The main one is an inherent lack of replay value. The fact that there's no timer and no rating system is great for casual, pressure-free play. But it also means that once you've solved the puzzles, you won't want to go back a second time. With only three worlds for the main World mode, there isn't a great deal of meat here, once you've exhausted the Party and fun-but-limited Blitz modes.

You may also find that the analogue control is just a little bit too twitchy - particularly for less experienced gamers. Holding a crouch at a mid-point level requires the the kind of steady thumb that only a console FPS expert is likely to have.

And the final issue is that Snipperclips is considerably less fun for solo players - or anything less than the full capacity of players across all three modes, for that matter. The game's appeal lies in two or more minds figuring out a solution - and then executing it - together, and progress becomes laborious when you're having to switch between two characters.

But these flaws are largely in service to Snipperclips's uniquely social premise.

All in all, while I'll be slipping back to the fields of The Legend of Zelda: Breath of the Wild whenever I get the chance over the coming weeks, it's Snipperclips I'll be reaching for whenever a friend or family member comes over and wants to know what the Switch is all about.

Snipperclips is a joyously accessible, deceptively smart multiplayer treat, and a game that really sells the whole Switch philosophy
By Jon Mundy
| Mar 6, 2017 |
Switch
Find out more about Snipperclips

Super Bomberman R review - Does the R stand for resurrection?