There's an awful lot to do in Seabeard, Backflip and HandCircus's Nintendo-aping cutesy builder adventure. So much so that from the get-go you're likely to be a little overwhelmed with the choices on offer.

Fear not though, because Pocket Gamer is here to steer you through the choppy waters of the start of the game with some hints and tips that should turn your island into a bustling community as quickly as possible.

So if you don't know your blue apples from your wriggly worms, and you can't figure out how to feed a cow or get some milk from it, read on. There'll probably be something here to help you out.

The first stall you'll build on your island is a fish stall, and you'll have a fisherman friend wandering after you wherever you go.

For a while this stall is going to be the only source of income that you've got, so it's important than you don't leave it idle.

Whenever you're out and about, make sure you nab at least a couple of fish from the sea and take them back to be sold. If you can't find any fish, or the ones you do find are too big to catch, grab some crustaceans from the beaches. 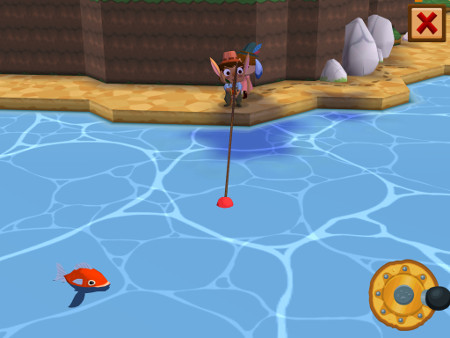 Crabs and clams don't earn you as much money, but they earn you some money, and they do it quickly. You can usually sell them before you've left the dialogue box telling you how long it'll take.

The more you fish, the better you fisherman gets at fishing as well, so it's always worth your while to snag some tiddlers and sell them on.

You can also sell items you earn from the Feeding Frenzy mini-game, but we'll get to those in another section of these tips. In fact, it'll be the next one.

One of your big problems after an hour or so of play is going to be the amount of storage you've got. Your first bag only holds 20 items, and it costs an awful lot to upgrade it to carry a few more.

That means you should only grab items that you know you need. If you don't have a food stall, there's no point grabbing food. If you don't need anything from the mini-games, then you might be better off skipping them. 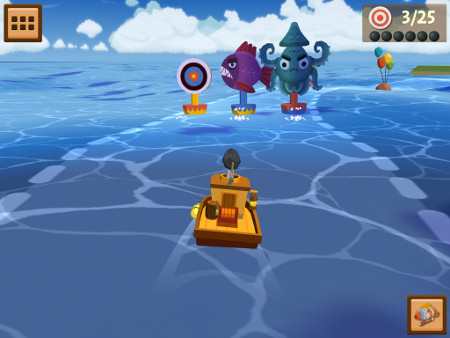 A lot of the side quests that you pick up involve completing the sea-faring challenges and giving the items you win to people. If you've got one of these on the go, then by all means fire a cannon at some tentacles.

Just bear in mind that you only have a finite amount of space, and it's likely you're going to have to start throwing things away to make space for more items that you probably don't need.

The mini-games are fun, but sometimes it's worth deliberately missing a few things so you end up with a lower tier reward - that usually means you'll get some extra cash.

After a few easy quests, you're likely to hit a bit of a log jam with the main story. It'll probably happen because you don't have enough currency to buy the next stall or item you need to continue.

That's why it's worth stocking up on side quests. These often earn you money and XP, as well as opening up crafting options that you can use later in the game.

If a quest is asking you to build a new stall, it's often worth concentrating on that. Not just because a new stall will give you an extra revenue stream, but because there's a good chance it'll free up some of the inventory space you inevitably filled with items you can't shift. 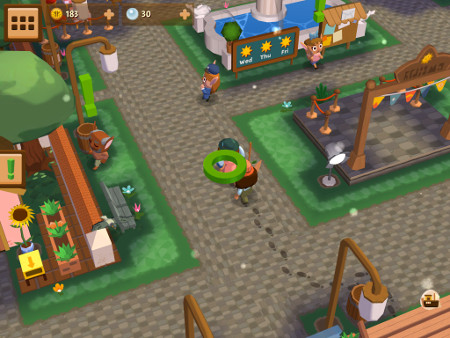 A food stall is particularly handy, but will set you back 300 coins, as well as the time it takes for your builders to make it.

You'll come across lots of items that you can only sell if you've got one though, especially when you're looking for worms, so it's worth putting the time in to make things easier for yourself in the long run.

Pearls are the premium currency in Seabeard, and they let you speed things like building and crafting up. You start with a bunch of these, and earn others through completing quests and mini-games.

If you don't want to spend to get more, then you need to use them wisely.

Speeding up builds might seem like a good idea, but time things right and start building at the end of a play session and you'll have a new stall or structure when you come back to the game. 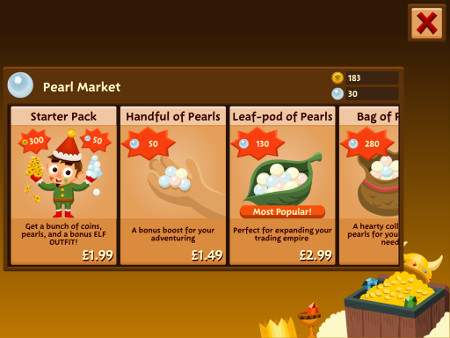 Don't bother spending them on swapping out mini-games either. If you're on a particular quest and you need a particular mini-game to pop up, check all the routes you can take,

If the right one doesn't come up use the airship to skip somewhere else and create a new set of options.

Last but not least, here are some hints and tips that should let you make the most out of your Seabeard experience.

Always remember to check the time limits on your quests. Some of them run out after a couple of hours, so pick your battles accordingly.

When you're starting out, try not to feed the animals on the farm unless you really need to. You won't have anywhere to sell the items that are created, and it's a good bet that a side quest will pop up asking you to do the same thing after you've used up your worms or cow leaf. 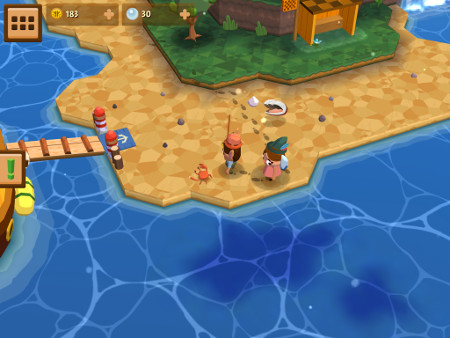 Also, keep an eye out for characters sat in the chequered benches near the various docks where you land. They want a lift somewhere else, and it's an easy quest you can complete with almost no hassle at all.

Choose how to spend your coins wisely as well. It's often worth saving up for the most expensive quest item first.

It might take a lot of grinding, but if you follow our tips you should reap the rewards in the long run.

Want more? Check out our growing collection of Seabeard articles!