Hands-on with FOTONICA: No time for blinking in this intense yet elegant platformer

Fast as a train

My hands pump in my peripheral vision as I gain tremendous speed across FOTONICA's first level, Brenta. It throws railroads at me is if I were a train.

I find out why when I hit a speed threshold and the black-and-white line art turns yellow. Suddenly, my head swells with endorphins, and I'm travelling close to 90mph on foot.

I forget to breathe for a few seconds.

FOTONICA is a first-person arcade platformer making its way over to iOS after winning folks over on PC (including me).

The changing contours of its abstract levels are as beautiful as ever on my iPad. I soon notice that as the tracks move into view they're significantly more alive with emergent details and animations than on PC.

Cliffs swell into view with a daunting presence. Spirals of squares create tunnels to run though. Small plinths pop up like daggers on the side of an industrial road. These are alien landscapes as seen through the severity of the New Aesthetic.

Then there's the engulfing darkness below where you never want to fall. But will, inevitably - this is a hard game to keep up with at times.

Despite all of this twisting architecture demanding your attention you don't have much time to concentrate on it. Instead, you're focusing on a single point in the middle of the screen as you travel at blistering speed.

Even though the single touch controls are flawless, it only takes a blink for you to mess up what could have been your best run yet. Intense is the right word for it.

I've fallen countless times already, my character letting out a agonized grunt as their hands reach out for the platform we missed. I've been playing with just my thumb on the screen to run, and letting go to jump into the air, over the huge chasms. 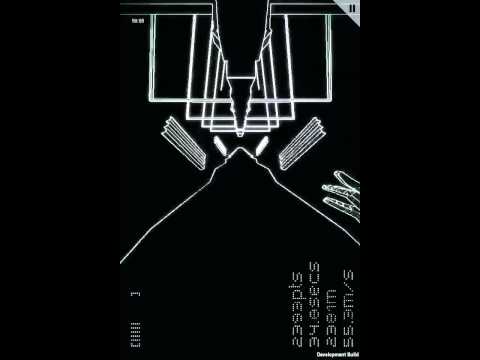 The most important touch is the one you make while in mid-air, though. It speeds you towards the ground so that you can get back to building up more speed on the ground.

This touch is FOTONICA's greatest test in the more difficult levels. It's the difference between slow and fast as touching down (so to speak) too early can mean missing your target.

Get it just right, however, and you can gain half a second back. (Luckily, if you do mess up, you need only to tap the screen to restart - even that is elegantly designed.)

If you're not quite as caring about time then you'll still need to use the technique to grab the pink orbs that increase your score significantly, anyway.

FOTONICA is, undoubtedly, a game of speed and beauty, of risk and reward. It's more beautiful than I remember and just as thrilling as it is on PC.

I haven't been able to try out the new splitscreen two-player mode, but it looks to be everything it should be. It would be hard for it not to be given the simplicity of controls - again, just a single touch.

This is as good as competitive, hold-your-breath-every-second, first-person racing gets.

With the extra levels, endless mode, and Normal and Hard difficulty, there's even less of a reason to ever leave this stylishly austere experience.

FOTONICA will be coming to iOS as a premium title soon.

Want more? Check out our growing collection of FOTONICA articles!

Incoming! Our 10 most anticipated iOS and Android games for September