By Craig Grannell
| May 23, 2014
iOS + Android
|
Bounden
Get Bounden on...
Find out more about Bounden
Available on: iOS + Android

"You need a partner to play it with," the PG editor said, emailing over a promo code and precisely no other information about the title I was about to review (other than that it was "interesting").

I imagined in my head yet another frantic two-player iPad game, flinging discs at each other until someone got annoyed and flung the iPad out of the window.

Instead, my iPhone began to download Bounden, which is quite possibly the precise opposite of 'frantic'. 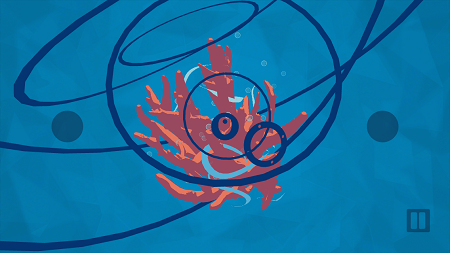 Swoopy success! At this point, all feels good in the world!

If you've not happened across the fairly extensive coverage for Bounden, it's an experimental two-player co-op title, based around choreography designed by the Dutch National Ballet.

It appears to be a fairly logical if absolutely massive leap forwards from developer Game Oven's own Friendstrap, where two players each held one end of an iPhone. The aim in that one was to hold on for as long as possible.

In Bounden, though, you're greeted by music; a little ball; and paths to follow by twisting and turning your iPhone. The idea is that the game guides you towards dancing.

The concept is very appealing, creative, and innovative, but the problem is that - initially at least - there's a huge disconnection between what you experience and the kind of thing shown in Bounden's promotional material and instructional videos.

In an ideal world, two graceful souls join as one, swooping and gliding, occasionally dissolving into adorable fits of giggles.

By contrast, I found playing Bounden awkward, frequently ungainly, and quite a lot less fun than actually dancing. (My wife's following comment was telling: "I really want to like this. And I really don't.") 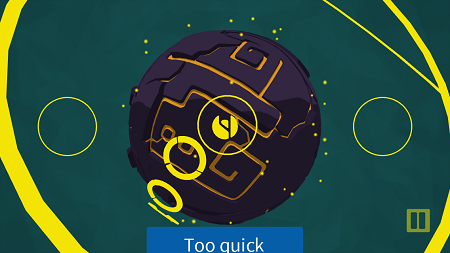 Rubbish timing non-success. At this point, during the fifth failed attempt, it's easy to start feeling frustrated

Much of the problem lies in Bounden lobbing you in at the deep end, despite the basis of the game itself being quite simple.

The iPhone must be continually reoriented to follow a path of discs. At certain points, your 'cursor' (which looks like a bleached Pac-Man) must itself be facing the right way.

Success relies primarily on your following and memorising choreography designed for each particular song. Or on your and a partner both figuring out alternative ways of doing so in a manner more akin to Twister.

Even the first few songs are demanding, especially once timers enter the mix. Bounden is all too eager to kill your game if you're not in sync with the music, rapidly turning what should be a whimsical and silly experience into staccato trial-and-error and disappointment.

It's easy to feel like you've failed on getting repeatedly stuck at the same point, but you're also only ever left with a fairly unhelpful hint and the option to practise each individual move within a song. 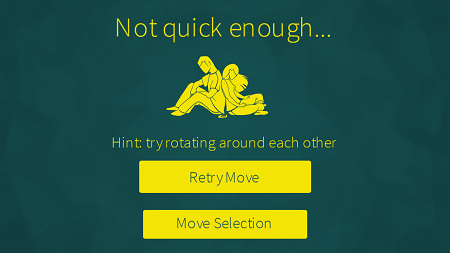 It doesn't help that the iPhone itself is almost incidental... and yet also essential.

What I mean by this is you're often presented with patterns to follow where one or both of you cannot see the screen. Combined with Bounden's overly strict desire for precision - even penalising you for being only slightly out of alignment - you often feel that you're just hanging on, and rarely feel like you're dancing.

But the most frustrating aspect of Bounden is that there's clearly masses of potential here. There are genuine moments of joy and beauty when you get a flow going, but these are sporadic. The game can become tiresome once the initial novelty wears off.

Perhaps some initial tiny and bite-sized levels could have introduced you more gently to common steps and patterns. Maybe the songs themselves could have been shorter. Or possibly the game could have dialled down the precision it demands rather than cutting you off when things aren't going too well.

As it is, it's telling the tutorial videos show people not paying that much attention to the screen - it seems perseverance and dedication are the order of the day.

If that's you and you've got an eager and enthusiastic like-minded partner with whom to 'virtually' dance, it's likely you'll enjoy Bounden. As it stands, though, I get the feeling that while there's an enjoyable and possibly amazing game in there somewhere, I don't think Game Oven has found it quite yet.

Want more? Check out our growing collection of Bounden articles!

Innovative and imaginative use of the iPhone here, and an interesting social experiment and experience. Bounden's unforgiving nature too often erodes fun and leads to frustration rather than beauty and elegance, though
By Craig Grannell
| May 23, 2014 |
iOS + Android
Find out more about Bounden