When Instantion gets things right it gets them shockingly right. Some of its puzzles bounce through logical loops so brilliantly it's hard not to get pulled along by them.

But sometimes it's too esoteric, mumbling when it should shout, stumbling just when you think it's found its stride.

It looks good, it sounds good, and there's a sturdiness to the platforming world it builds that means you'll push to get further even when things are at their most frustrating.

But when things are at their most frustrating, brought to a standstill by a particularly obscure puzzle, it's very frustrating indeed. 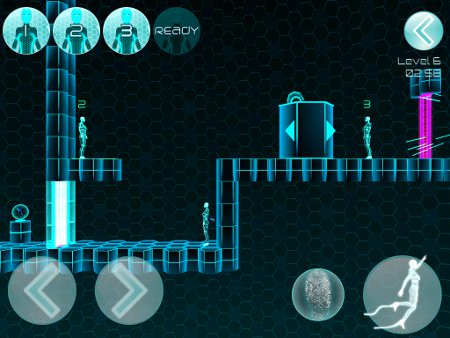 I don't even know who the real me is any more

The game involves tossing clones of yourself around neon blue platforming levels. You drag and release to fire them, their trajectories following arcs traced on the screen.

You've got standard platforming controls as well, and all of the clones on screen replicate the movements you make with these. One of you jumps, all of you jump.

You have a limited number of duplicates to use. You can draw them back individually, or cross a checkpoint to suck them into your chest. If a clone dies you need to hit a refill point to get it back.

At the start of the game you'll be tossing the odd clone out to push switches, but soon you'll be controlling multiple versions of yourself, timing jumps and making sure your shots land just right.

Things can get a little fiddly when you're attempting to stand multiple clones in specific places but they all keep wandering about while you make corrections to your own position.

And when there are laser beams thrown in to the equation, and ranking penalties for killing clones, the frustration can tarnish the experience. 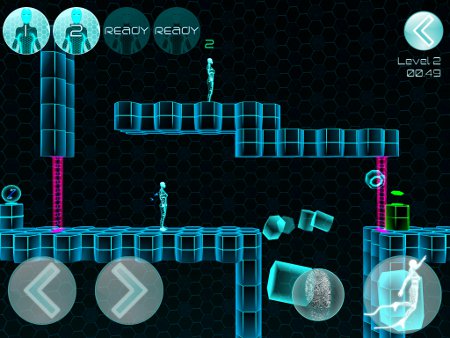 Instantion certainly has its moments, and there are puzzle sections that flow beautifully.

But then it'll lose its way again and become a shadow of what it was, solid ideas replaced by toil and an over-reliance on precision.

It's worth giving a go, because there are some real stand out moments here. It's just a shame that the game can't maintain a more even momentum.

Hopeless: Space Shooting puts laser-blasting blobs out amongst the stars

Out at midnight: Instantion is a The Swapper-inspired puzzler about cloning yourself

Instantion's a tough puzzler about controlling clones, coming to iOS and Android on April 10th

Create clones to solve puzzles in a Tron-like world